Sales of Camera Were Up, but Brand Was Deemed Off-Strategy
READ THIS NEXT
Triller will make its Super Bowl debut as the inauguration impedes other brands’ Big Game plans: Wednesday Wake-Up Call

Cisco's announcement that it will shut down its consumer Flip camera business may have led to shrieks and wails on Twitter, but some industry watchers saw the shuttering of a popular brand once held up as an Ad Age Marketing 50 case study as smart business. 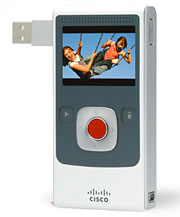 Wall Street cheered the close of the "distracting" non-core consumer business, even as a tech analyst at the NPD Group called it a "bad decision on so many levels," and one of the top trending topics on Twitter was "RIP Flip," with comments ranging from "flipping ridiculous" to "you'll be missed."

Its abrupt nature wasn't the only reason the brand kill-off was a surprise. The camera was actually still selling fairly well. Flip's sales grew 15% last quarter, according to Cisco, although it did say that was short of the 30% it had expected. NPD analyst Steve Baker said it is still "far and away" the leading consumer video-camera company, and that although unit volume sales were flat from 2009 to 2010, there was no "evidence of an underlying fall in demand."

So who's to blame? Wall Street, along with smartphones and digital cameras that can now shoot video, were among the culprits. Several versions of the "How the iPhone 4 killed the Flip" headline showed up in blog posts and media stories. Pundits blamed the rise of HD video on smartphones in general for turning the Flip into unnecessary device baggage. And a well-liked ad campaign from Bird Design launched in 2009 couldn't stave off competition from the phones or from established players like Kodak, which also entered the space.

Wall Street took its role in stride with analysts such as Brian White of Ticonderoga Securities releasing notes like the following: "The Street never fell in love with Cisco's consumer strategy, and the Flip product line was the epitome of this disdain."

Some people wondered why Cisco didn't simply sell off the business, but one tech analyst said few companies in the industry would buy the considerable overhead and operating expense of a smaller existing company, especially when they can expect to pick up the market share anyway when it dies off.

And the Flip brand could still survive. Mr. Baker said, "I'm sure you will see the Flip brand back as there is a lot of desire for well-known brands in the electronics marketplace. Somebody will be willing to pay for just the brand."

Cisco ranked at No. 14 of Interbrand's annual list of the best brands last year, and while the Flip brand value wasn't detailed separately, Interbrand's positive assessment specifically noted Cisco's efforts to "grow presence and relevancy in the consumer market."

Meanwhile, Cisco's Flip website was still selling cameras on Tuesday with no announcement or mention that the brand was shuttering the product line. Cisco did say in its statement that it will "support current FlipShare customers and partners with a transition plan."