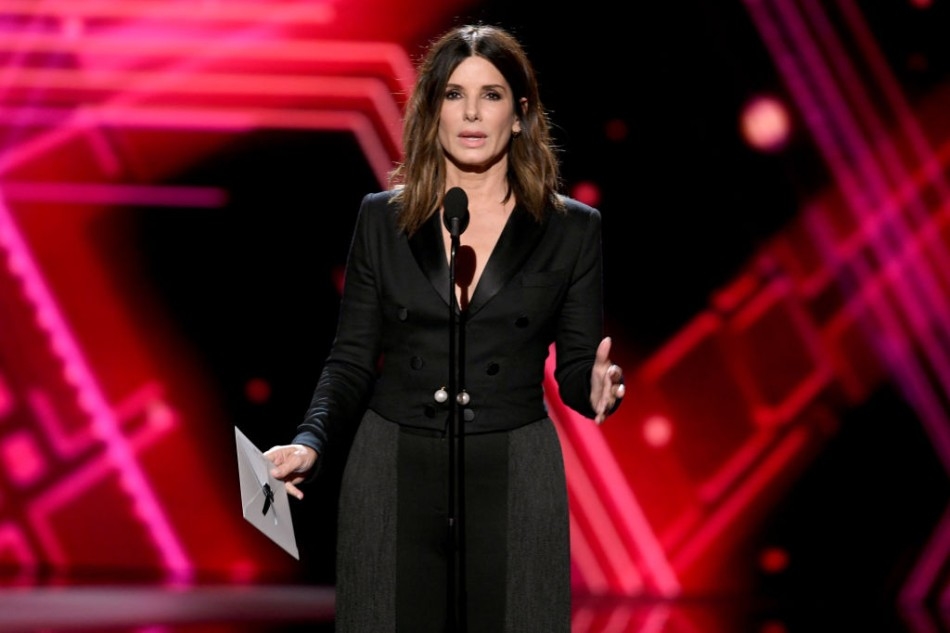 Sandra Bullock, who is teaming up with Ellen DeGeneres to fight fake endorsements.

Stars fight fake celebrity endorsements
Despite what some online ads claim, Sandra Bullock is not leaving show business to focus on her skincare brand. She doesn't even have a skincare line. Bullock and Ellen DeGeneres are teaming up in a legal battle against online ads that use their names and images without their permission, The New York Times reports. The stars filed a lawsuit in Los Angeles Superior Court; because they’re uncertain who is behind the schemes, their suit targets “John Does Nos. 1 through 100.” The Times writes that:

Many of the fake ads associated with Ms. DeGeneres and Ms. Bullock offer free trials. In practice, customers are often charged full price, the complaint said.

These kinds of phony celebrity endorsement ads have become a common problem for stars. Dr. Mehmet Oz hasn’t found a cure for diabetes, either, despite what the online ads claim. The Times says his legal team sends 3,000 cease-and-desist letters annually to fight fake endorsements ads.

Read more: Online fakery is a theme in the news this week. See also: “Airbnb promises to verify every single one of its 7 million rentals after a very bad week,” via The Verge. And also, from BuzzFeed News: “A network of fake local news sites in Albany, Edmonton and elsewhere generated millions of pageviews as part of an ad fraud scheme.”

Unfriended by Facebook
An app developer’s lawsuit against Facebook has yielded a trove of 7,000 internal company documents that include details about how Facebook tried to hold its competitors at bay. Ad Age’s Garett Sloane reports:

In one communication, Facebook CEO Mark Zuckerberg worries about upcoming messenger apps piggybacking on Facebook to grow their service in 2013: “I think we should block WeChat, Kakao and Line ads,” Zuckerberg wrote. “Those companies are trying to build social networks and replace us. The revenue is immaterial to us compared to any risk. And I agree we should use ads to promote our own products, but I’d still block companies that compete with our core from gaining any advantage from us. I’d also keep blocking Google but otherwise wouldn’t extend the block to anyone else.”

Worth noting: These glimpses into Facebook's internal strategy deliberations were released amid legal proceedings launched by Six4Three—a company that made an app to let people find photos of their Facebook friends in bathing suits.

An update on online political ads
"Google is in discussions about changing its political ad policy,” The Wall Street Journal reports, citing people familiar with the matter. The report offers no further details on what exactly is being discussed; it just says that “some Google employees are speculating the changes could be related to what type of audience targeting the company allows ad buyers to place.” Speculation is just speculation, of course, so stay tuned.

Meanwhile, amid concerns about misinformation in political campaigns spread on social media and online, Hillary Clinton praised Twitter for banning paid political ads. “Twitter got it right,” Hillary Clinton said at The New York Times’ DealBook conference. “That should be the decision that Facebook makes as well.”

Another one: Papa John’s is getting its third chief marketer in under three years. “Max Wetzel, the former VP of consumer brands and chief transformation officer at PPG Industries, will hold the new dual role of chief commercial and marketing officer as of Nov. 18, Ad Age’s Jessica Wohl writes.

Getting to know you: McDonald’s sent Ad Age's Jessica Wohl some fun facts about new CEO Chris Kempczinski, such as that he has two kids and a Goldendoodle. He has run more than 20 marathons. He also eats McDonald’s ice cream every day (but … is that really a good idea?)

Product of the day: Just in time for Thanksgiving, Pringles is offering something called the “Friendsgiving Feast Turducken Kit.” “It includes turkey-, duck- and chicken-flavored Pringles, as well as cranberry sauce-, stuffing- and pumpkin pie-flavored versions of the crisps,” according to the Ad Age Marketer’s Brief. The pack can be yours for the low, low price of $15.99. Gobble gobble.