First there was Birchbox for beauty. Then came BarkBox for dogs. Now there's Blush Box for the bedroom. 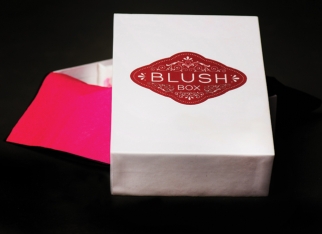 Blush Box is a venture Mr. Tomlin is pursuing independently from those companies, though he did hire Rockfish to handle branding and other creative assets.

"I've always believed that I'm a better leader of [an agency] when I'm also a practitioner of what we preach," said Mr. Tomlin. "If we're good at building brands and companies for our clients, we should be able to do it for ourselves."

Still, as far as pet projects go, it's an unexpected one for the conservative Mr. Tomlin, who before entering advertising attended the seminary and earned a master's degree in theology. The work is a departure for the agency, too, which has mostly worked with buttoned-up brands like Walmart, Cisco and recently, the Mitt Romney campaign.

But Mr. Tomlin says he's been following subscription-commerce businesses closely and sees opportunity in the model.

Indeed, the space does seem headed for a climax. Established players like ShoeDazzle and Birchbox are growing -- the beauty-oriented Birchbox recently bought Paris-based Joliebox to grow its global footprint -- while offers exist in just about every vertical. There are specially-curated boxes for those interested in gourmet foods (Love With Food) to health and wellness (Klutchclub) and even one just for people with curly hair (CurlBox).

The first Blush Box will be unveiled in early October and will contain a mix of lingerie, vibrators and personal massagers, and intimate wipes.

The boxes are geared to women, and everything arrives in a discreet, unmarked packaging. Subscribers should expect each delivery to include between five and 10 items. Future contents will include more sex toys, scented lotions and shower gels, massage oils, candles and lip plumpers. "Anything that helps women feel sexy and sultry," said Ms. Roberds.

Some vendors are providing samples for free to include in the first couple of boxes, but going forward Blush Box expects brands will pay to be included. A selection of specially curated themed boxes will be available, too, such as the "Blushing Bride" for wedding night, honeymoon or bachelorette parties, and a Valentine's Day box that will be available early next year.

Blush Box isn't cheap. It goes out once a quarter, and costs $99 for pay-as-you-go or a yearly subscription costs $400. That's steeper than say, Birchbox, which is $110 for a 12-month subscription (though it's mostly all small-sized samples). If you sign up for a full year of Blush Box, you can shave about fifty bucks off.

Whether people will pony up, remains to be seen, but so far the sex industry has been recession-proof. A Scientific American article last year noted that sex toys are a $500-million-a-year industry in North America, with the industry growing, thanks to Tupperware-style parties and more big-box retailers stocking the items. And that was before the "Fifty Shades of Grey " craze, which observers say is fueling more purchases.

Initial marketing for the service will include paid search and social-media outreach starts immediately, combined with PR efforts. Starting in November, a bigger paid-media push will tout themed-boxes and subscription packages as gifts in time for the holidays.

Cindy Gallop, another advertising-exec turned entrepreneur in the sex space with her venture called MakeLoveNotPorn.tv, is rooting for Blush Box. She welcomes all initiatives that are aimed at "getting sex more publicly talked about," though she would prefer to do away with discreet wrappers on Blush Box to help break down the societal norms around people being embarrassed about sex or buying sex toys.

"If you are setting out to build a brand in this area, you have to set out to break the ridiculous social puritanism around this topic, because unless you do, you'll always have trouble growing your brand and business."