From Pupil Tracking to Gesture Recognition, Vehicles' Best Selling Point Is Increasingly Inside the Cockpit
READ THIS NEXT
Dodge pays homage to history with EV logo

Swooning over a landscape of sensuous sheet-metal, most visitors to the recent New York International Auto Show most likely passed by a discreet display at the Infiniti stand that showed a glimpse of how man, in the future, will interact with machine -- specifically, his automobile. 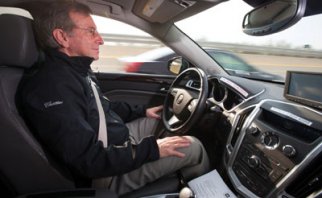 Meet the concept Infiniti LE, the automobile as gadget. The key components of its elaborate electronics system -- navigation, movies, gesture recognition, pupil tracking, fingerprint ignition "keys" -- don't come from a conventional automotive supplier, but from Intel, the folks who brought you the personal computer.

Did we mention cloud-computing access? Video vehicle surveillance? A "Personal Assistant" 24/7 electronic concierge? Intel and Nissan, Infiniti's parent company, said that many of these technologies will be in place and on the road next year. It's a long way from the AM radio.

Styling and sex appeal might be the love-at-first-sight factors that sell a fair number of cars, but the fact of automotive marketing life in 2012 is that what's inside the cockpit -- and, in many cases, invisible to its occupants -- is crucial, especially in targeting a younger, tech-savvy buyers whose life revolves around their digital devices. Or rather, an affluent, younger tech-savvy buyer, since prices for existing systems are often upward of $2,500.

Global revenue from automotive infotainment components is projected to hit $33.5 billion in 2012, up 3% from 2011, according to a market-tracking report from IHS iSuppli. One auto exec likened the competition in this space to "an arms race ... customers are expecting and anticipating this stuff." Brake assist, lane-departure warning and parking-assist cameras are already offered by several manufacturers, and a cockpit camera in the Mercedes Benz S Class can alert the driver if he appears drowsy.

Intel is also working with BMW and Toyota. "This is really the starting point of us becoming a significant player in the automotive market," said Tom Steenman, VP for Intel's intelligent-systems group. "The car is becoming the next big connected mobile device." To that end, the company recently established a $100 million venture-capital fund to explore advanced uses for its chips.

Cadillac is taking a same-but-different tack from Infiniti with its new CUE. The Cadillac User Experience appropriately premiered not at an auto show, but at the CTIA Wireless Association's telecommunications show in San Diego.

CUE uses a stunning 8-inch screen that , as with a smartphone, users can swipe, pinch or flick to control navigation, radio, heating and cooling functions. It also has now-obligatory natural-language voice recognition. CUE will sync with up to 10 devices, including your phone. The instruments' screens are customizable, and the driver will be able to speak the name of a song -- "Play 'I'll Sleep When I'm Dead' "-- and CUE will find it if it's stored in the system.

"CUE will be a big part of the way we market the XTS," a Cadillac sedan arriving next month, said David Caldwell, brand communications manager for the company. It will be standard in the XTS and, eventually will migrate to other models as an option that will probably cost about $2,000.  Working with Fallon , Minneapolis, on creative, "visually, we'll try to get across, if you love the tablet and the smartphone, you'll like the CUE," Mr. Caldwell said. TV spots are expected to begin next month, he added.

As far as adding on utilities that would allow drivers to hook up to Facebook, Twitter or other assorted applications, most are sensitive to the specter of distracted-driving issues. CUE, for instance, is preloaded with just a single smartphone-based app to keep the focus on basic navigation, hands-free phone use and some information displays, Mr. Caldwell said.

Fast-forward from these advancements, and you'd presume that the autonomous car can't be far behind. In fact, Google has tested a fleet of driver-less Toyota Priuses in Nevada that can accelerate, steer and brake automatically using a combination of radar, sonar and laser-detecting devices.

The company said last month that it is in talks with some major automakers. "The most important thing computers can do in the next 10 years is drive a car," Google Project Manager Anthony Levandowski told a panel at an engineering conference in Detroit.

General Motors is taking the concept for a test drive as well with its "Super Cruise" system. Using cameras that talk to the car's GPS, Super Cruise will "steer" the car, centered between the lines on a highway or interstate (it's not designed, yet, for use in city traffic). But it's limited by weather conditions and indistinct white lines on the road. GM says the Super Cruise models could launch in production cars by "mid-decade."