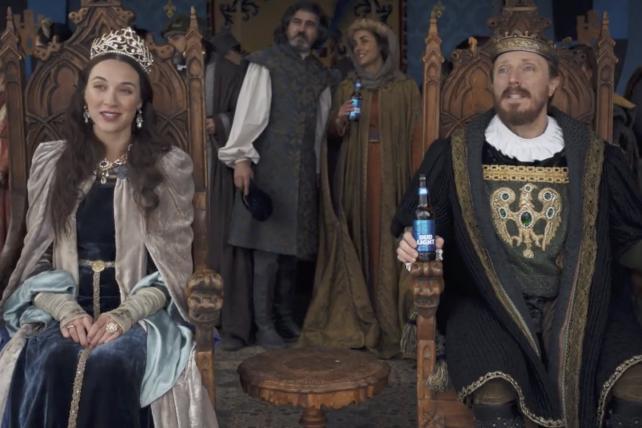 What people are talking about today
Many things about Super Bowl LIII were forgettable (certain commercials, the game), and other things we wish we could forget (that "chunky milk" ad, Maroon 5 frontman Adam Levine's halftime striptease). Ad Age Editor Brian Braiker reviewed the advertising and concludes: "Despite each 30-second commercial costing upwards of $5 million, on par with recent years, there was a lot of mediocrity."
The Super Bowl in one tweet: With the action at Atlanta's Mercedes-Benz Stadium dragging on, the Mercedes Twitter account quipped: "If this game wasn't in my stadium, I would have driven away by now." Ad Age's Garett Sloane says it was "an A-class post." But the joke, perhaps too honest, got deleted.
By the way: It was the lowest-scoring Super Bowl ever and yet another win for the New England Patriots. They beat the Los Angeles Rams 13-3.

Dark knight
Only one ad surprised: a spot in which a comic Bud Light commercial morphed into a dark, menacing promo for "Game of Thrones." Bud Light's medieval-themed "dilly dilly" schtick has always played off the popularity of the HBO show, so it was intriguing to see the two brands unite. Ad Age's Ann-Christine Diaz writes that Bud Light and Wieden & Kennedy worked with Droga 5 and HBO on the ad, in which, shockingly, the Bud Knight actually gets killed during a jousting tournament.
More Bud Light news: In other spots, the brand dissed smaller rivals Miller Lite and Coors Light for using corn syrup. E.J. Schultz writes in Ad Age: "It's unusual for a bigger brand to target two smaller ones; typically, it's the smaller challenger brands that try to tweak the big guy." Does this tactic seem unsporting? Also, how much do people really care about corn syrup? FWIW, the corn industry was not happy, as Jessica Wohl wrote in our live blog.

Brawl
The National Football League's commercial marking its 100th season was "more exciting than the game for sure," Ten35's Ahmad Islam wrote on the Ad Age live blog. The fun ad from 72andSunny Los Angeles and "Friday Night Lights" director Peter Berg united 44 NFL players, past and present, in a scene of comic mayhem set at a fancy banquet.

The spot shows the Oakland Raiders' Marshawn Lynch trying to sneak a taste of frosting, setting off a chain reaction leading to crushed cake, toppled tables and shattered wine glasses. Its stars included Joe Montana, Mike Singletary and Tom Brady. It seemed to be a fan favorite, and the NFL is in need of good PR; it's been criticized from both left and right over the way it handled players protesting racial inequality. This was an entertaining way to generate some love and remind people of the league's legacy.

On the other hand: Some people felt it was hypocritical when the NFL honored civil rights heroes during this Super Bowl, given that the leader of the anthem protests against racial injustice, Colin Kaepernick, remains unsigned by a team, HuffPost reports. Kaepernick has filed a lawsuit accusing the NFL of colluding to keep him out. Some celebrities, including director Ava Duvernay, said they wouldn't watch the game to show solidarity with him.

'Mushy at the edges'
The Pepsi Super Bowl Halftime Show, headlined by Maroon 5 with performances by Big Boi and Travis Scott, was panned by social media and by reviewers. The New York Times called Maroon 5's show "dynamically flat, mushy at the edges, worthy of something much worse than derision: a shrug." (Ouch.) Maroon 5 frontman Adam Levine performed bare-chested for part of it, which not everybody was happy about; some commenters questioned the double standard about Janet Jackson's "wardrobe misfunction" during the show in 2004 being such a big deal.

There was generalized controversy around the halftime show, with some artists saying they turned down offers to perform because of the NFL's handling of Kaepernick and the anthem protests. Cardi B told The Associated Press that she had mixed feelings about declining, but chose to support Kaepernick: "There's a man who sacrificed his job for us, so we got to stand behind him."

Just briefly:
A fad: There were a lot of Super Bowl ads about robots or AI (TurboTax, Pringles, Michelob Ultra and Sprint all went that route), Ad Age's Jeanine Poggi writes. Some reminded us about the benefits of being human. Maybe we collectively need reminding about that, to make us feel better about the impending robot takeover?

Warholmania: Coca-Cola's pre-game spot was inspired by an Andy Warhol quote, and Burger King used film footage of him unwrapping a Whopper for its ad. Ad Age's Jessica Wohl writes all about the latter, from whose idea it was to buy the archival scene, to how it came together. There's an amusing backstory, too: Warhol initially suggested unwrapping McDonald's instead.

In non-Super Bowl news: Skittles snubbed the Super Bowl and instead mounted a one-day-only live show in New York City on Sunday starring Michael C. Hall. Ad Age Editor Brian Braiker calls it a "self-referential absurdist thriller—equal parts Beckett, Ionesco and Monty Python—that not only breaks the fourth wall, but shatters it beyond all recognition."

Number of the day: About 17.2 million Americans are expected to skip work today post-Super Bowl, USA Today reports. If you've got a Super Bowl-related ailment, we hope you get well soon.