How About Some Nachos in a Tortilla? Taco Bell Expands Snacks Menu | Ad Age
Skip to main content
Sign In Register

How About Some Nachos in a Tortilla? Taco Bell Expands Snacks Menu

Taco Bell is hoping it will be a destination for young people who are looking for a snack, whether it's a sweet one or savory. Among them: nachos, chicken or a loaded baked potato each wrapped in a tortilla 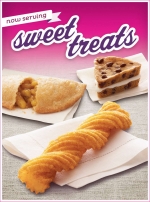 For starters, it's expanding its dessert menu, which already includes cinnamon twists and its "signature" caramel apple empanada with sweet snacks like the churro, which it describes as "Taco Bell's version of the Mexican doughnut, dusted in cinnamon sugar and served warm," and a cookie sandwich, which is made up of two triangle-shaped chocolate chip cookies and vanilla ice cream filling in between. All will be less than a dollar. On a limited-time basis, the chain will offer a strawberry and mango creme Frutista Freeze.

Then, in the coming weeks, Taco Bell will also announce some savory snack foods in the form of wraps. Dubbed "loaded grillers," the savory snacks will essentially be nachos, chicken or a loaded baked potato, all wrapped in a tortilla. Taco Bell by early next year will launch a "happier hour" TV campaign touting its new snacks. The campaign will be handled by the chain's lead agency, Interpublic's DraftFCB.

Other new Taco Bell launches include a new national product, XXL Steak Nachos, which will feature a triple-size portion of steak (as compared to its 1.5 oz Steak Taco), melted cheese, guacamole, and pico de gallo atop tortilla chips. The steak nachos will be $5.99; beef or chicken will be $4.99. The chain is also testing products that include a Double Steak Quesadilla in Charlotte, N.C., for its new upscale Cantina Bell menu, as well as the enchilada-like Smothered Burrito, being tested in Dayton, Ohio.