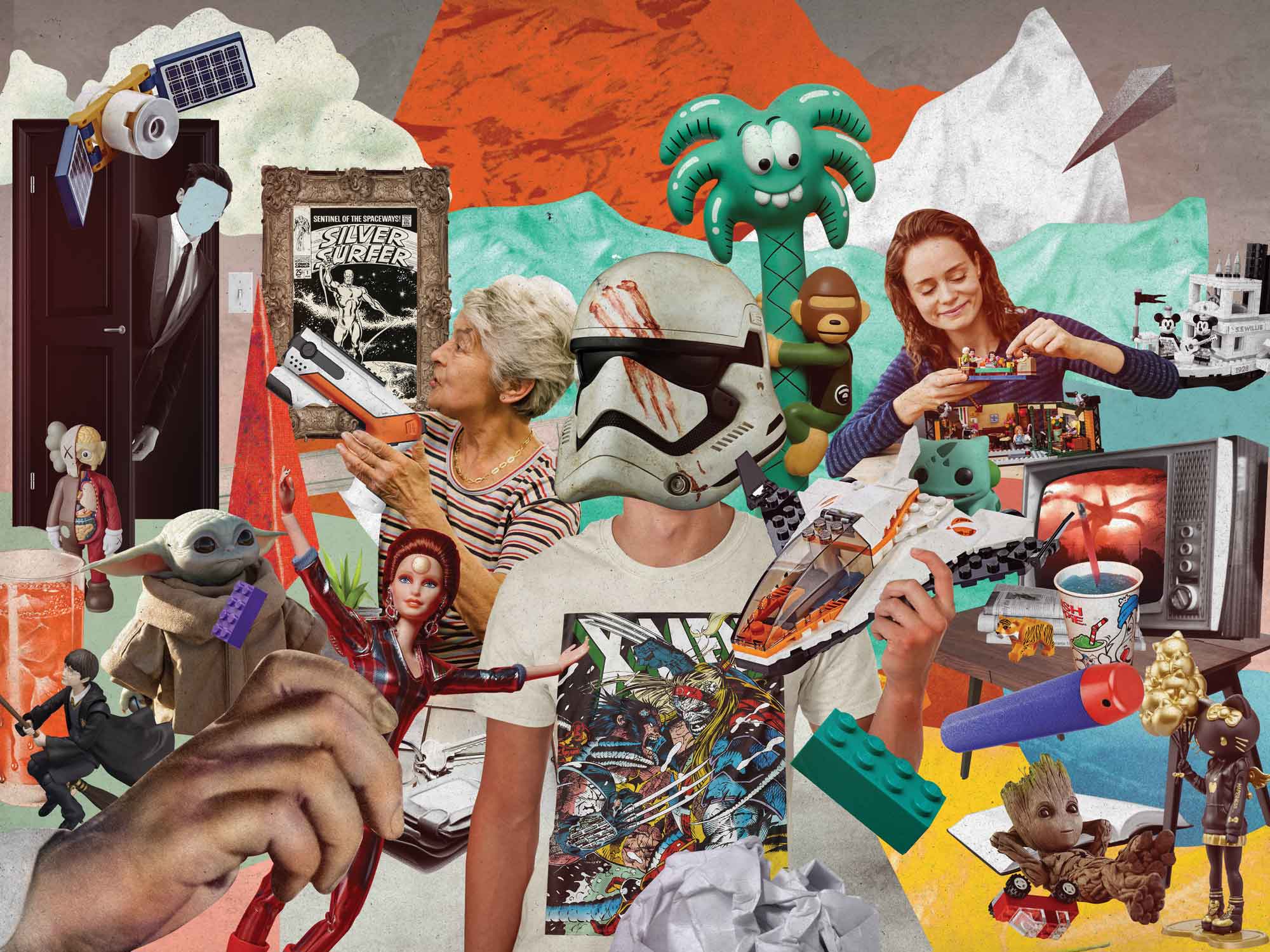 Toys grow up
Toymakers turn to adults to juice revenue
When it comes to buying toys, Mike Haracz, a father of two living outside Chicago, spends hundreds of dollars each year. But the comic books, board games, superhero figures and Star Wars merchandise aren’t for his young daughters. The 35-year-old chef is adding to his own collection.

When it comes to buying toys, Mike Haracz, a father of two living outside Chicago, spends hundreds of dollars each year. But the comic books, board games, superhero figures and Star Wars merchandise aren’t for his young daughters. The 35-year-old chef is adding to his own collection.

“There’s so much cooler stuff now about the things I used to love as a kid—there are more things available,” says Haracz, who estimates he invests between $500 and $1,000 each year on such products, which include a life-size $250 Stormtroopers helmet that matches the size specifications used in the Star Wars movies. “We now have the money and can afford those kinds of things that as a kid, maybe you were lucky to get. But now as you get older, you have more available resources to just go out and buy what you want.”

And toymakers, which have recently struggled to find consistent sales growth, are noticing. Companies like Hasbro, Build-A-Bear, Mattel and Funko, which makes large-headed pop-culture figures, are targeting adult fans like Haracz who have a penchant for nostalgia and the financial means to collect. These new products are more expensive and more exclusive than their youth-geared counterparts.

It’s not just a nostalgia play. Some toy brands are also catering to older consumers looking to relieve anxiety through exercises like pattern-making and coloring. It's a continuation of the adult coloring craze that has gained popularity over the last several years. Late last month, Lego unveiled a new tile product that could easily be a Lego version of coloring for adults, for example.

“From a brand standpoint, you don’t want anybody to grow out of the brand,” says Adrienne Appell, senior director of strategic communications at the Toy Association, the organization behind the annual Toy Fair trade show in New York. “And if you have these fans who can become lifelong fans, you can create products that keep them engaged whether or not they have kids.”

It’s a smart move during a time when the industry faces pressure from all sides. As children gravitate toward electronic devices like iPads and iPhones, traditional toymakers are exploring additional revenue streams. The bankruptcy of Toys R Us two years ago is also still weighing on brands. Last year, toy sales fell 4 percent to $20.9 billion, according to market research firm NPD Group. In its most recent earnings report, Hasbro failed to meet analyst expectations, reporting flat revenue of $1.6 billion for the third quarter and a decline in profit. Mattel fared slightly better, with a 3 percent increase in quarterly sales to $1.5 billion. However, even Target, which had been consistently emerging as a retail anomaly by delivering strong sales results, recently reported weak toy sales over the critical holiday season, sounding an alarm bell for marketers. 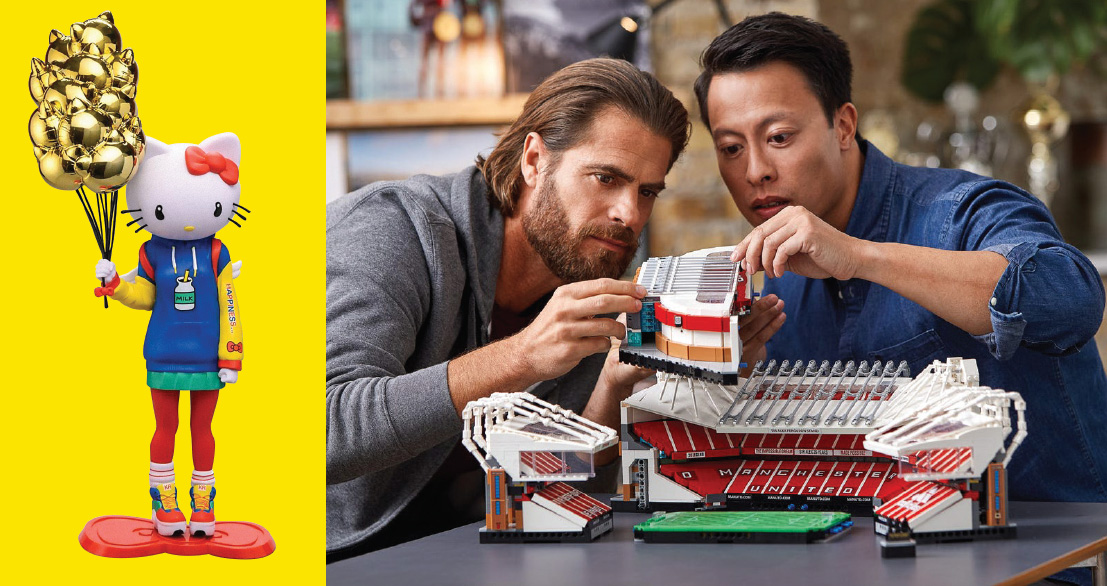 Money to be made

Getting grown-ups to open up their wallets—in a big way—might be just what beleaguered toymakers need.

At Toy Fair, which takes place later this month, a growing “Pop Stop” aisle is devoted to action figures from the likes of Pokémon, KidRobot and Funko, which sells Harry Potter and Golden Girls toys among those from other pop culture franchises. Square footage in the section increased by nearly 2,000 square feet this year, according to Appell, who says the entire trade show is approximately 446,000 square feet.

There’s money to be made. As Haracz points out, children have limited spending money and rely on their parents for purchases. But with adults, toy brands are able to charge more for limited edition or exclusive products. Haracz will often spend a little more, like $40 for a case that includes a collectible figure, to go along with a $60 video game, for example. Many of these mature toys are more sophisticated and detailed in construction than typical action figures, since they’re meant to be preserved, not played with—thus allowing brands to charge more. Lego, for example, is selling a building set replica of the stadium of English Premier League soccer team Manchester United for $300. Some of Barbie’s Signature anniversary dolls cost upward of $60—a Darth Vader X Barbie is $100.

“In the current economy, the mass market as we once knew it doesn’t exist anymore—what we have now are mass niches, relatively narrow audiences, but they buy deep,” says Chris Byrne, a toy industry expert known as “The Toy Guy.” “It’s much more sophisticated, but that’s what the audience is willing to pay, that’s the risk and the opportunity [for brands.]”

After finding that many of its customers are older than 18, Build-A-Bear, the St. Louis, Missouri-based stuffed animal brand, has been expanding its assortment into higher price ranges and adding more licensing deals meant to appeal to such shoppers. This year for the first time, the company has rolled out a Swarovski crystal necklace-wearing bear for $140 and a Rose Bear for $40 ahead of Valentine’s Day. In comparison, the brand’s standard bears retail for as low as $10, according to the company’s website. In addition, Build-A-Bear recently announced it will be selling its own version of the wildly popular “The Child,” the character known as “Baby Yoda” from Disney Plus’ “The Mandalorian.” The company also has licenses for “Nightmare Before Christmas” and “Deadpool.”

“Because we started to see those trends, we’ve been a lot more assertive in our licensing strategy to appeal to consumers who are older consumers,” says Sharon Price John, chief executive of the 23-year-old company. Build-A-Bear works with fan websites and bloggers to market its offerings, and uses its own CRM data to target a broader range of consumers, John says.

By embracing the community aspects of fandom and adult collection, brands can zero in on connecting with their consumers. Convention events like Comic Con, along with social media, have paved the way for both shoppers and brands to bond over shared interests. Hasbro hosts a “Pulse” website dedicated to fans looking to purchase by franchise, like Marvel, Power Rangers or Star Wars. The site also includes content, such as behind-the-scenes stories and fan profiles where Hasbro can engage with its customers.

Hasbro’s entertainment-focused brands “carry a certain level of legacy or nostalgia along with passionate fan communities,” says Eric Nyman, chief consumer officer. “This provides a great opportunity to grow and develop our franchise and partner brands that have been significant to pop culture for decades.”

Hasbro is also expanding its Nerf brand by capturing older players. The company debuted a new 50,000-square-foot Nerf Challenge last year in Los Angeles—the pop-up installation, where consumers could run obstacle courses and shoot blasters, attracted children and adults alike as a family experience. The event is expected to move to other cities. 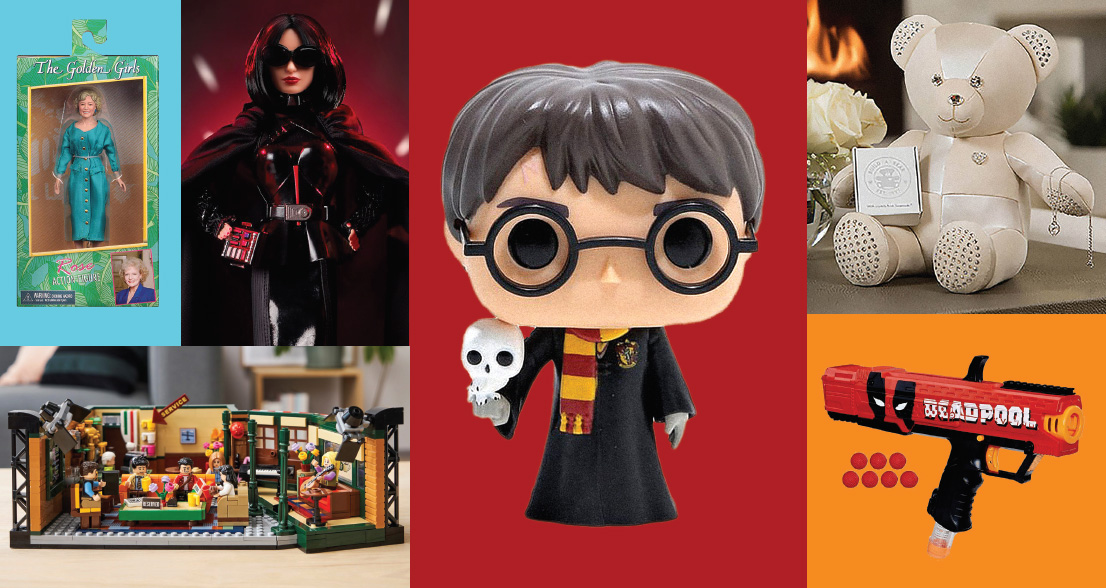 Thanks to mass sharing on digital platforms, many adults who formerly might have felt embarrassed to profess their love for a toy brand now feel more free to share. Whole communities have built up around Bronies, the adult male followers of the My Little Pony franchise.

“The larger trend is adults engaged in activities that were once traditionally only child-related, for relaxation and renewal.”

“The less shame people feel about toys when they’re older, paired with the ability for them to feel like they’re part of a community, has become a sweet spot for us as a brand,” says Micheal McNally, senior director of brand relations at Lego, which is using collectors items, such as its Manchester United set, to tap into this audience of super fans.

Lego has been able to make use of influencers on social media who post about what they’ve built as a way of marketing higher-end products, says McNally, adding that such products are selling out. A $60 replica of Central Perk, the coffee house featured on the popular TV series “Friends,” sold out within 72 hours last year.

The brand has also been able to widen its marketing lens through movies, and now, through TV as well with the debut this month of Lego Masters, a series on Fox that features competing teams of builders. Actor Will Arnett hosts the show, which was promoted heavily during the Super Bowl, also on Fox.

In addition to capturing the high-paying fandom market, Lego is also courting adults who use its wares to relieve anxiety and de-stress. Like coloring books, some of the building sets are a way for consumers to zone out and focus on the task at hand, an opportunity to unplug from other angsts.

“The larger trend is adults engaged in activities that were once traditionally only child-related, for relaxation and renewal,” says Byrne, noting that Lego has been able to capitalize on the trend. “That’s what toy companies need to be asking: Do we serve different audiences, and how do we target product against that?”’

Instructions included, but not necessary

To that end, Lego introduced a new play system late last month called Lego Dots. Unlike traditional sets where the user is building a 3D construction, the new system is 2D with flat tiles and allows users to create patterns and designs. There’s more creativity involved with how consumers use the product in that an instruction booklet and step-by-step directions are not necessary. While Lego Dots is not specifically made for adults, Lego is planning to roll out an adult-specific version of the product in the future as it ramps up its marketing for adults.

“There’s something about people more and more turning to the Lego brand for mindfulness,” says McNally. “It’s this idea of getting lost in your own creative thought and losing sense of time and space and not being stressed out by what the end result looks like but more focused on how fun it can be in that process.”