The election's a year away; isn't it a bit early for such a big ad buy? 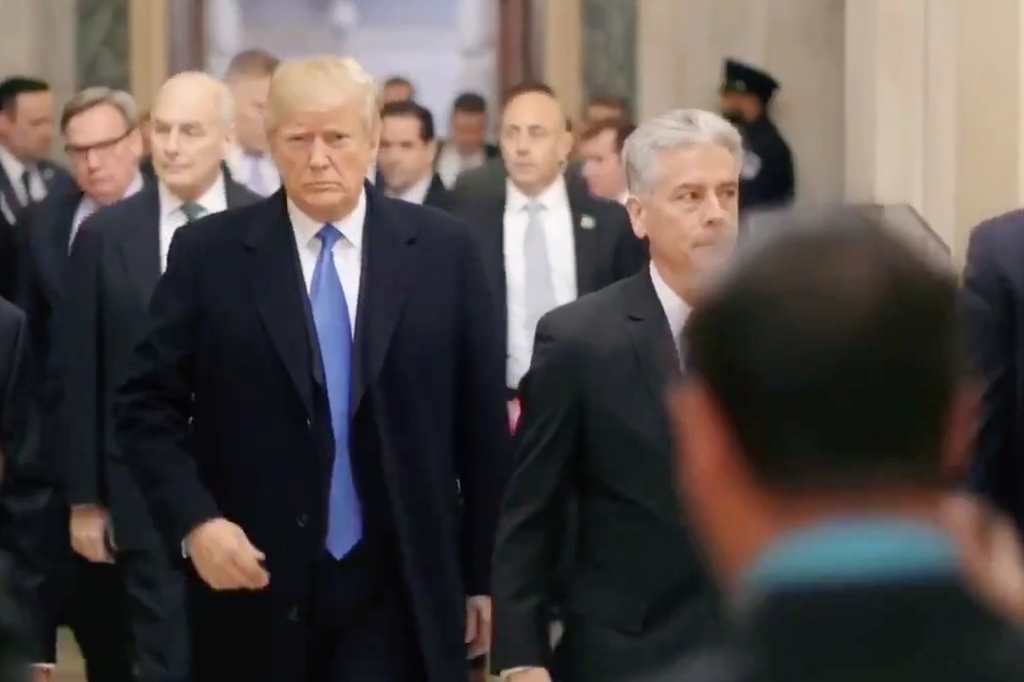 A scene from the Trump 2020 ad that ran during the World Series.

A World Series surprise
The Washington Nationals beat the Houston Astros 6-2 in Game 7 of the World Series, winning their first title. Also worth mentioning, from an advertising standpoint: President Trump’s re-election campaign ran a commercial during the Fox broadcast, though the presidential vote is still a year away. The narrator credits Trump with creating jobs and “obliterating ISIS,” then adds, “He’s no Mr. Nice Guy, but sometimes it takes a Donald Trump to change Washington.”

The 30-second spot also attacks Democrats, who “would rather focus on impeachment and phony investigations, ignoring the real issues.” Trump’s new ad ran just a few days after the president was booed while attending Game 5, so it was surprising to see him back in the game, so to speak.

CNN’s Reliable Sources newsletter quoted campaign spokesman Tim Murtaugh as saying the spot was part of a seven-figure ad buy to run during the World Series and afterward. "It's a national World Series buy 12 months out. We're on offense," he said. Check out Ad Age’s latest tally of 2020 election ad spending here; there’s a lot of money flying around already.

Twitter bans political ads
More news at the intersection of advertising and politics: Twitter announced that it’s banning political ads globally. Twitter CEO Jack Dorsey seemed to throw down the gauntlet to Facebook, which has been criticized relentlessly for allowing politicians to run ads containing false claims. "It seems Twitter’s best answer to the problem of disinformation in political ads is to just bar them,” Ad Age’s Garett Sloane writes. Trump 2020 campaign manager Brad Parscale complained about “another attempt to silence conservatives.” Dorsey retorts that it’s not about free expression, but about paying for reach. Trump is apparently still free to tweet out his campaign ads to his 66.4 million Twitter follows—which is exactly what he did with his World Series ad last night.

And by the way, happy Halloween
Here’s an interesting factoid from this week’s Ad Age Marketer’s Brief: “Halloween ranks as one of the top pizza-ordering days of the year, along with Super Bowl Sunday, New Year's Eve, the night before Thanksgiving and New Year's Day, according to industry group American Pizza Community.” Pizza marketers, along with candy brands, have plenty of promotions planned. Papa John’s has a $11 jack-o-lantern-shaped pizza with a smiley face made out of pepperoni. We can’t decide if it’s cute or creepy.

Just briefly:
Despite it all: “Facebook reported rising ad revenue and users in its quarterly report, showing resilience in the face of recent political turmoil surrounding the company,” Garett Sloane writes in Ad Age. Ad revenue was $17.4 billion, up 28 percent year-on-year.

Resilience: “As wildfires and electrical outages spread across California, ad agencies are shutting down offices and encouraging employees to work from home—where they are often joined by colleagues whose homes are without power,” Ad Age’s Dan Whateley reports.

People news: “Jo Ann Ross, one of the advertising industry’s best-known executives, will lead ad-sales efforts at ViacomCBS, the company that is expected to rise from the merger of CBS and Viacom sometime in early December,” Variety reports. Also, Hulu tapped advertising vet Scott Donaton as its new head of creative. Years ago, Donaton served as editor, then publisher of Ad Age. Read more by Ann-Christine Diaz.

Trick (or treat) of the day: Today’s Halloween-themed Google Doodle is a trippy interactive haunted house filled with creepy-but-cool creatures like owls, spiders and vampire bats. It’s fun, and you also might learn something. Such as that owls have feathers on their feet, like built-in slippers. Happy Halloween.