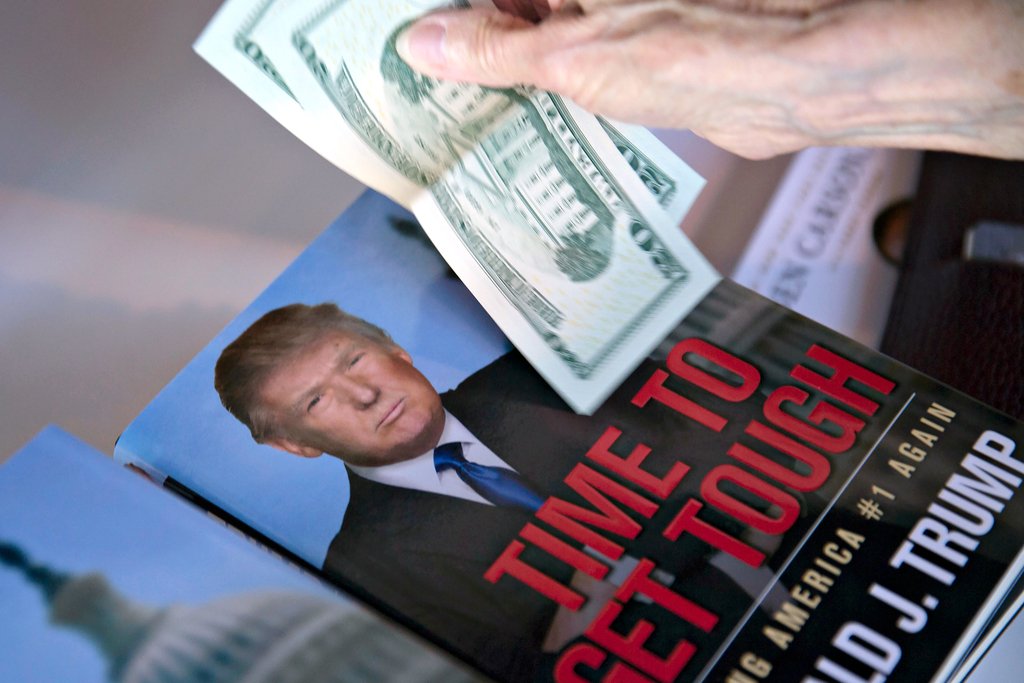 A guest pays for books near a book by Donald Trump, president and chief executive of Trump Organization Inc. and 2016 U.S. presidential candidate, during The Family Leadership Summit in Ames, Iowa, U.S., on Saturday, July 18, 2015.

President Donald Trump, his company and three of his children must face a class-action lawsuit in which people claim they were scammed into spending money on fraudulent, multilevel marketing ventures and a dubious live-seminar program.

U.S. District Judge Lorna Schofield in Manhattan ruled Wednesday that the case can go forward with claims of fraud, unfair competition, and deceptive trade practices. The decision likely opens the door for the plaintiffs to start gathering evidence from Trump and his company, including documents and testimony.

Schofield dismissed federal racketeering claims, eliminating allegations that could have netted triple damages for the plaintiffs.

A group of four people claims the Trumps ripped off thousands of aspiring entrepreneurs by promoting two bogus multilevel marketing ventures and the live-seminar program that promised to teach Trump’s “secrets to success” in real estate. They’re seeking to sue on behalf of a nationwide class of people they claim were also cheated.

They sued in October using the names Jane Doe, Luke Loe, Richard Roe and Mary Moe, claiming they feared Trump’s habit of criticizing opponents on Twitter and exposing them to potential retaliation by his followers. Schofield let them remain anonymous at least until her decision on the Trumps’ motion to dismiss the case. She’ll likely revisit the question now that she’s ruled.

Both sides claimed to be happy with the ruling.

“We are pleased that the court has denied defendants’ motion to dismiss” the state-law claims, said Roberta Kaplan, lawyer for the plaintiffs. She said she looks forward to moving ahead with the case “to obtain justice for the plaintiffs, and thousands of other working Americans just like them.”

“We are delighted with today’s decision,” said Joanna Hendon, who represents the Trumps. The racketeering claims “are baseless and should never have been brought,” she said. “We look forward to disposing with the rest of the case.”