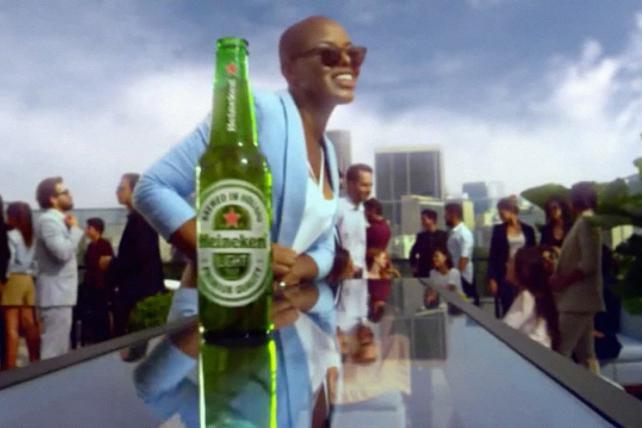 Welcome to Ad Age's Wake-Up Call, our daily roundup of advertising, marketing, media and digital news. What people are talking about today: Heineken's getting criticized for a beer ad with the tagline "sometimes, lighter is better." Chance the Rapper took up the issue on Twitter, saying he fond the spot "terribly racist," and actress Gabrielle Union posted the commercial with a line of puzzled-looking emojis. It's a light beer, which explains the tagline. What bothered some people was the interplay between the tagline and the images on the screen. As Ad Age's E.J. Schultz writes, the commercial

"shows a bartender sliding a Heineken Light down a bar to a woman who appears dissatisfied with her glass of wine. The beer passes several dark-skinned bar-goers before reaching the woman, who has lighter skin than some of the other patrons."

Meanwhile, the message "sometimes, lighter is better" flashes on the screen. One Twitter user wrote: "Damn. That's not even subliminal, that's overt." Others said they didn't see racism, just an ad for light beer. As Schultz writes, this was Heineken's response: "While we feel the ad is referencing our Heineken Light beer—we missed the mark, are taking the feedback to heart and will use this to influence future campaigns."

Your daily update on Facebook's woes
As the new season of HBO's "Silicon Valley" launched, it subtly trolled Facebook during the title sequence. As The Hollywood Reporter says, the opening "showed familiar tech giant logos like Airbnb, Uber, Oracle, HP, Intel, Twitter and YouTube — and also a flickering Facebook logo that briefly appeared in Russian Cyrillic script lettering." Ha. Moving on to other Facebook developments (because yes, there are many):

1. The U.S. Federal Trade Commission confirmed reports that it's investigating Facebook's privacy practices. The official statement sparked some snickering on Twitter. "Love how the FTC press release on investigating Facebook ends with a request to *like* the FTC on FB," one astute Twitter user wrote.
2. The Intercept reports that ICE, or U.S. Immigration and Customs Enforcement, uses Facebook's data to help track down down immigrants. Facebook tells The Intercept that ICE does not have special data access.
3. Senate Intelligence Committee Vice Chairman Mark Warner wants tech company CEOs to be held accountable for Big Tech's big problems, Axios reports. One of Warner's comments, per Axios: "I am ... flabbergasted that the CEOs of these companies seem to be happy to answer questions from their shareholders, but not from the lawmakers who represent all Americans."
4. In Ad Age, Shelly Palmer writes: "The silver lining to the Facebook–Cambridge Analytica scandal is the fact that you are becoming aware of what data you create, what is collected, and how it is used. This is a very good thing."

'An American Bistro'
P.F. Chang's China Bistro was founded in a mall in Arizona in 1993; now it's launching in China. Its first outpost in Shanghai "will play up its American roots while reducing its reliance on Chinese dishes," as Ad Age's Jessica Wohl reports. CEO Michael Osanloo tells Wohl: "I'm a big believer that we can be hugely successful in China because in China we're not Chinese food, we're a restaurant and we're an American-inspired restaurant." The Shanghai restaurant will launch in the second quarter. In China, the chain plans to the use tagline "An American Bistro."

Better banner ads: Adobe's got a new product offering that can automate the process of resizing display ads and improve personalization. Ad Age's George Slefo writes: "For designers, Adobe Advertising Cloud Creative removes one of most tedious aspects of their job: creating hundreds of versions of what's basically the same ad."

1, 2, 3 punch: After Facebook and Google announced bans on ads for cryptocurrencies, now Twitter says it will do the same. Read more on Bloomberg News.

Brand pivot: A Hooters in Tokyo is renting out its tables as a co-working space during the restaurant's downtime, SoraNews24 reports.

Headline of the day: "Ikea is very proud of its mealworm meatballs," from the New York Post.

Creativity pick of the day: ICYM, an Apple ad set in a flea market shows us how easy it is to pay with facial recognition. It's directed by Pretty Bird duo The Daniels. As Ad Age's Alexandra Jardine writes, "'Fly Market' revolves around a young man who transforms himself from nondescript to dapper with a whole new outfit, accessories, shades, bling and all, simply by glancing at the items in the market.'" A hat flies off a hat stand, a suit flies off a mannequin, and so on. Watch it here.