Plus: Keegan-Michael Key stars in seltzer ads for Truly
READ THIS NEXT
College football on the brink after Big Ten, Pac-12 scrap seasons 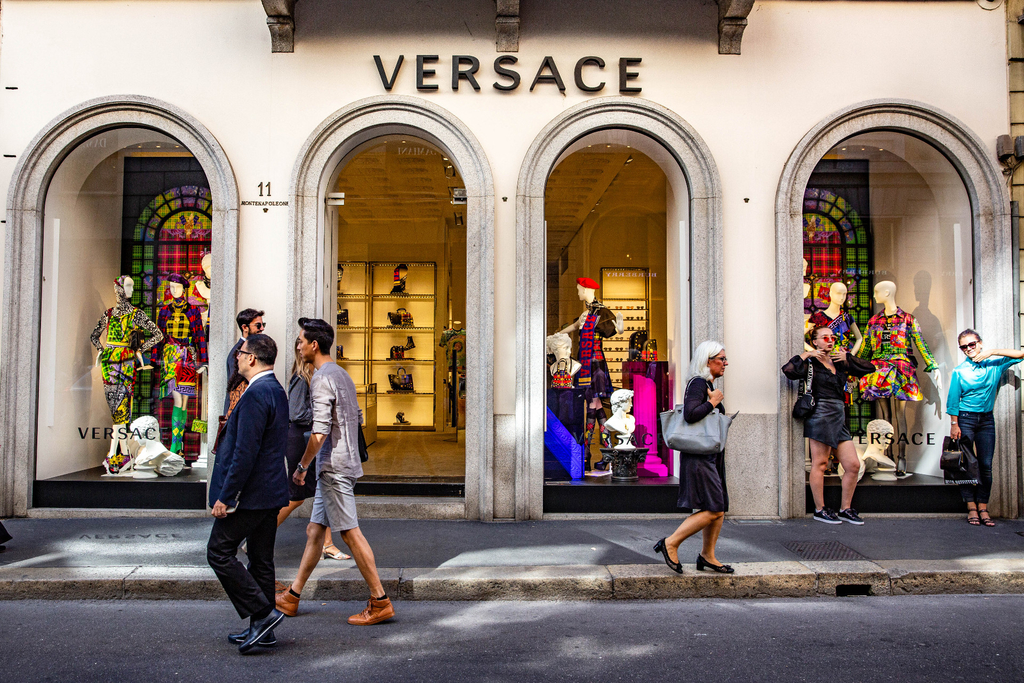 Versace apologizes in China
Versace has been forced to issue an apology in China after a slogan on one of its T-shirts implied that Hong Kong and Macao were independent territories. As reported by ABC News, the mistake—which is particularly embarrassing coming at a time of tensions in Hong Kong over its Chinese rule—is down to mislabeling Hong Kong and Macao as individual countries. Both are in fact former colonies of Great Britain and Portugal, respectively, that were returned to China in the 1990s.

The shirts caused outrage on social media sites in China, and the fashion house—which was acquired by Michael Kors last year—said the shirts had been removed from sale and destroyed. It stated on Weibo: "It's our company's negligence and we express deep apology for the impact it caused. Versace reiterates that we love China and resolutely respect China's territory and sovereignty."

Universal cancels ‘The Hunt’ movie
Universal Pictures decided to cancel its upcoming movie “The Hunt” this weekend in the wake of the mass shootings in Ohio and El Paso, reports the New York Times. The film, starring Betty Gilpin, Hilary Swank and Emma Roberts, was scheduled to be released on Sept. 27 and depicts people being hunted for sport by a group of “globalist elites.”

In a statement on the film’s website, Universal said: “While Universal Pictures had already paused the marketing campaign for ‘The Hunt,’ after thoughtful consideration, the studio has decided to cancel our plans to release the film. We stand by our filmmakers and will continue to distribute films in partnership with bold and visionary creators, like those associated with this satirical social thriller, but we understand that now is not the right time to release this film.”

As the Times points out, the statement came after President Trump appeared to allude to the film on Twitter on Friday, without specifically naming it. He said it was made “in order to inflame and cause chaos.”

As Schultz reports, the new ads “go squarely after the beer, wine and spirits categories.” They show Key urging consumers to “find a new use for your old drink”—as illustrated in spots where he dumps beer into a plant, uses scotch to polish a chair and cleans a car’s tires with vodka.

The campaign by agency Johannes Leonardo, comes as hard-seltzer sales are soaring, writes Schultz—they’re up by 187 percent year on year and the category is becoming the biggest disruptor to Big Alcohol. The leader remains Mark Anthony Brands’ White Claw—but Truly, owned by Boston Beer, is clearly upping its game.

Just briefly:
Growth: WPP’s stock price was up on Friday after the company reported revenue growth in its second-quarter earnings, reports Ad Age’s Lindsay Rittenhouse. Its revenue grew 1.6 percent in the first half of the year and 2.3 percent in the second quarter, although profits and billings are down. CEO Mark Read said the boost was helped by new client wins including eBay, Instagram and L’Oréal.

I'll be there for you: Lego is tapping into “Friends” nostalgia with a brick set based on the sitcom, writes Ad Age’s Adrianne Pasquarelli. Born out of the brand’s crowdsourcing platform, Lego Ideas, the set includes a recreation of the Central Perk café and memorabilia from the show, as well as all the characters; even grumpy Gunther is there.

Liquor: Amazon has applied for a license to open a liquor store in San Francisco selling beer, wine and spirits, reports Business Insider. The storefront would potentially give the company a location from it could deliver alcohol to Prime Now customers in San Francisco.

Short Film of the Day: Mini is behind an intriguing new short film directed by Yorgos Lanthimos, director of “The Favourite” and “The Lobster.” Ad Age’s I-Hsien Sherwood writes that the 12-minute film, titled “Nimic,” is made in partnership with Mini and Droga5 London. It stars Matt Dillon as a cellist whose life is changed by a chance encounter on the subway, and judging by the trailer,—which you can watch here at Creativity Online—it’s as quirky as you’d expect from the Oscar-nominated director. Also: don't forget to check out Creativity’s Top 5 campaigns from last week, including Amazon’s opening of a “Fleabag”-themed cafe in L.A. where you can pet live guinea pigs.