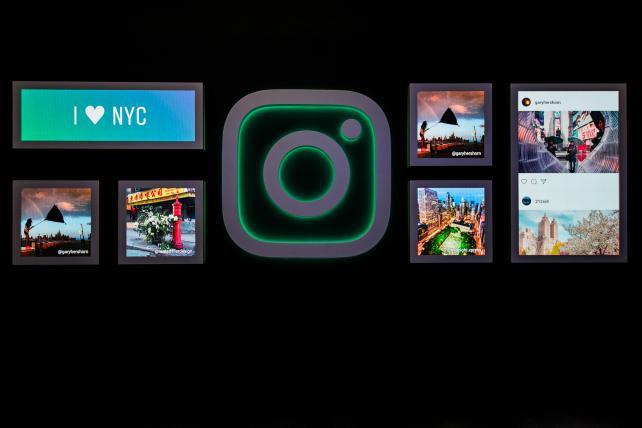 Decorations on the wall at the Instagram office in New York.
Credit: Jeenah Moon/Bloomberg

Welcome to Ad Age's Wake-Up Call, our daily roundup of advertising, marketing, media and digital news. You can get an audio version of this briefing on your Alexa device. Search for "Ad Age" under "Skills" in the Alexa app. What people are talking about today: Instagram's co-founders have resigned, which is bad news for the photo-sharing app's parent company, Facebook. The New York Times broke the story that CEO Kevin Systrom and Mike Krieger, chief technical officer, plan to exit within weeks. Systrom later released a statement confirming the departures:

"We're planning on taking some time off to explore our curiosity and creativity again. Building new things requires that we step back, understand what inspires us and match that with what the world needs; that's what we plan to do."

There may have been other motivations as well. Bloomberg News says the two "were frustrated with an unusual uptick in day-to-day involvement by (Facebook CEO Mark) Zuckerberg, who is now more reliant on Instagram for Facebook's future growth."
Instagram—which Facebook bought in 2012 for $1 billion, which seemed astronomical at the time—is a bright spot for the company, partly because it's still a draw for young users. And while Facebook has been shaken by successive crises, including election interference on its platform and the Cambridge Analytica user data scandal, "Instagram's brand has remained mostly untarnished," as Bloomberg notes.
What Zuckerberg says: The Facebook CEO gave a statement to TechCrunch saying he had learned a lot from Systrom and Krieger: "I wish them all the best and I'm looking forward to seeing what they build next."
One POV: "This is a disaster," tech entrepreneur Mike Dudas tweeted. "There is absolutely no way to spin it. Instagram is/was the future of Facebook."

Shop in a snap
Snapchat and Amazon are teaming up to be a "mobile-commerce power duo," Ad Age's Garett Sloane reports. Snapchat users can now take a photo of something—some sneakers, say—and the platform will link them to Amazon, where they can buy the product or something similar. It also works by scanning bar codes. As Sloane writes, both Instagram and Snapchat have made a push into e-commerce; Snapchat has shoppable ads, and Instagram has shopping tags you can click on to buy products. When social media companies promised to bring us all together, we should have known they'd eventually make us hang out in a virtual mall.

Come together
SiriusXM, the satellite radio company, is buying Pandora, the streaming service, in a $3.5 billion deal that's supposed to help them compete against players like Spotify. SiriusXM already had purchased a stake in Pandora last year for $480 million. As Ad Age's George Slefo writes, Monday's deal will help SiriusXM diversify to reach users who aren't in their cars as well and/or people who don't want to pay for a music service. (Unlike SiriusXM, Pandora offers both a paid version and a free, ad-supported one.)
But: The market was not impressed. Bloomberg News says "Sirius suffered its worst stock plunge in more than seven years on Monday" after the deal was announced.
Meanwhile: Apple's acquisition of Shazam closed, and "it plans to make the music recognition service available ad-free to consumers soon," Variety reports.

More caffeine
Starbucks sales growth is slowing down. And Bloomberg reports that the coffee giant is "planning an organizational shake-up, including corporate layoffs that will start at top levels." It's not clear how many jobs will be affected, or what departments might be targeted. "We must increase the velocity of innovation that is relevant to our customers, inspires our partners, and is meaningful to our business," CEO Kevin Johnson wrote in a memo to employees, according to the Bloomberg report. Innovation includes buzzy menu items; Starbucks cage-free sous vide egg bites, anyone? (Yes, that's a real Starbucks menu item.)

Just briefly:
Kors + Versace: Michael Kors is reportedly close to buying Versace; the Daily Beast says the deal would put a flashy Italian luxury label in the hands of an affordable-luxury American brand that "has cemented itself as a status symbol of suburban fashion." (Ouch.)

S.O.S.: Sears' CEO has a last-minute plan to try to save the retailer, "after already shuttering thousands of stores and selling off some of its key brands," The Washington Post writes.

NBC: Robert Greenblatt, the NBC Entertainment chairman, is stepping down; he "led a revival of NBC's prime-time lineup with shows such as the drama 'This Is Us' and the comedy 'The Good Place,'" The Wall Street Journal writes. Greenblatt is being replaced by two NBC execs, Paul Telegdy and George Cheeks.

Speaking of "The Good Place": Ad Age's E.J. Schultz talks to Ted Danson, who stars in "The Good Place," as well as a few current Smirnoff ads. "I actually asked myself the other day, 'Here I am, I'm 70, is it OK for me to be having as much fun as I am?'" Danson says. "It's almost like, 'Should I be growing up and doing something serious at this point?'"

Overheard in the newsroom: Weight Watchers is changing its name to WW. Ad Age's Anthony Crupi opines: "The rebrand seems fine on paper, but then say it aloud: 'double-u double-u.' Or "double you" and repeat for good measure. That's probably the exact opposite of what they were going for."

"For real": Chipotle has a new tagline: "for real." As Ad Age's Jessica Wohl writes, the line plays up Chipotle's use of what it refers to as "real food." Read more here.

Ad of the day: Google has a doodle today encouraging people in the U.S. to register to vote. But also check out Levi's ad encouraging voter turnout, and read the writeup by Ad Age's Adrianne Pasquarelli. The spot's soundtrack is "Think," by the late Aretha Franklin, and the non-partisan ad seems to portray polling stations around the world. The common denominator: Everyone is wearing Levi's, of course. Watch it here.