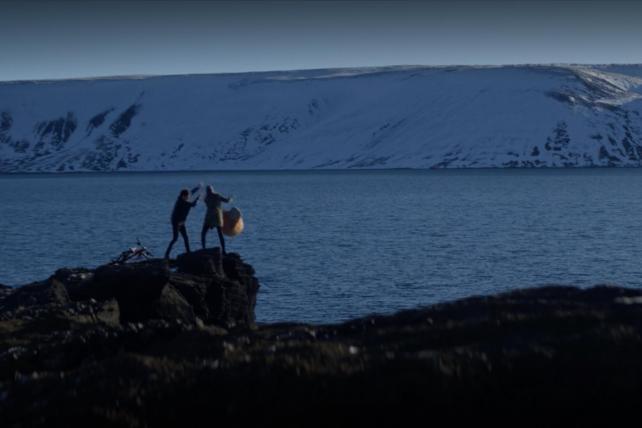 Welcome to Ad Age's Wake-Up Call, our daily roundup of advertising, marketing, media and digital news. Get all the news on Advertising Week each evening this week in our pop-up email newsletter. Sign up right here What people are talking about today: Remember the "Choose Your Own Adventure" books of your childhood? Netflix is planning some new programming with a similar storytelling format, Bloomberg News reports. Viewers "will get to choose their own storylines in one episode of the upcoming season of 'Black Mirror,' the Emmy-winning science-fiction anthology series," Bloomberg says. We can't wait to see it. Just one request, though. The real world seems dystopian enough right now -- is it too much to ask for one storyline that ends with a happily-ever-after?

Advertising Week New York (one day down, three to go)
After day one, here's a thought from Jeanine Poggi: During the five panels she's moderating, only two of the 15 speakers (not counting herself) are women. That's interesting, "considering there are more than a half dozen panels on Monday alone focused on gender equality, diversity and inclusion," Poggi writes in Ad Age's roundup, which includes more on the diversity, equality and inclusion discussions; the line to get photos with Bullseye, Target's mascot dog; a prediction of ads to come on Netflix; and the downside of reducing Advertising Week sprawl.

J&J + Gen Z
Johnson & Johnson is trying something different to market Clean & Clear to teenagers. It's shunning Kardashian-style influencers in favor of teens who have inspirational stories but modest social followings, Ad Age's Jack Neff writes. It's a bet that real stories will resonate, at a time when "social media is rotten with fake followers and questions are growing about how real influencer endorsements really are," Neff writes.

Not-quite-branded content
Newscaster Katie Couric is trying something new. She has a deal with Procter & Gamble to make short-form videos profiles of accomplished women, with TheSkimm distributing them. In an interview with Ad Age's Jeanine Poggi, Couric says she doesn't think of what she's doing as branded content:

"I want to be careful about how we characterize it. It's really sponsored by a company, but I am editorially independent. It's basically echoing or reflecting some of the things they care about. I don't really define it as branded content. You know, I think it's clear that it sort of harkens back to the old days where 'programming is brought to you by,' but it's not really about what they're selling, it's really about what they believe in."

It's certainly an interesting project: Experienced anchor Couric + the world's biggest advertiser P&G + TheSkimm, the digital outlet with a following among millennial women. But if it's not exactly branded content, what do you call it?

Changes at the top
Monday brought some big personnel changes in Silicon Valley. First, Adam Mosseri, Instagram's current VP of product and the former head of Facebook's news feed, will lead Instagram, the company announced. Kevin Systrom and Mike Krieger, who co-founded the photo-sharing app, announced their exit last week amid reports of tensions with parent company Facebook.
And second: Google, the biggest recipient of digital advertising revenue, has a new top ad exec. It's Prabhakar Raghavan, who heads up Google's business-applications unit and is "a veteran of search technology and artificial intelligence research," Bloomberg News writes.
Raghavan replaces Sridhar Ramaswamy, who led the ad business for five years and now becomes a venture partner at Greylock Partners. Greylock welcomed its new hire by reminding everyone of the huge scale of growth he has overseen: Ramaswamy "joined Google in 2003, and he has been instrumental in helping Google Ads scale from $1.5 billion dollars of revenue in 2003 to more than $100 billion annual revenue run rate as of the 2nd quarter of 2018," Greylock notes. To put things in perspective, $100 billion in annual revenue is close to the total value of … Instagram.

Just briefly:
'New Fox': Fox is expected to appoint Marianne Gambelli as head of advertising across the broadcast, news and sports assets that will be spun off into a new company once Walt Disney closes its deal for 21st Century Fox. That means Joe Marchese, who oversees advertising for Fox Networks Group, will exit. Gambelli has led ad sales for Fox News since last year. Read more in Ad Age by Jeanine Poggi.

Done deal: Ad giant Interpublic Group says it has closed its $2.3 billion purchase of most of Acxiom Corp.

NDA: Papa John's founder John Schnatter acknowledged in court that he has confidentiality agreements with at least two women, though he didn't give details; Bloomberg News says "one of the agreements involves a 24-year-old female employee of a firm that worked on Papa John's advertising."

Bias in advertising: Is your agency "racist-ish?" Short videos from New York agency Oberland, inspired by real-life situations, are designed to get agencies thinking about bias, writes Ad Age's I-Hsien Sherwood. For example, what's going on exactly when a white casting director asks a black actor to say his lines again, this time "a little more … street?"

Quote of the day: At Advertising Week, Facebook's Carolyn Everson had some pointed comments about WhatsApp founders Brian Acton and Jan Koum. Acton gave an interview last week expressing regret about selling the company to Facebook. "Brian and Jan sold the company for a lot of money, $19 billion," Everson, Facebook's VP for global marketing solutions, said. "They both did very well. I would love to hear them talk more about their philanthropy." Read more by Ad Age's Garett Sloane.

Ad of the day: French crooner Charles Aznavour has died at age 94, and the headlines are calling him "France's Frank Sinatra." In his honor, watch this ad from Ikea and DDB Brussels that uses one of his classics as the soundtrack. The spot, released earlier this year, features a stunning performance by a couple sliding around their living room floor in their socks. Watch it here.