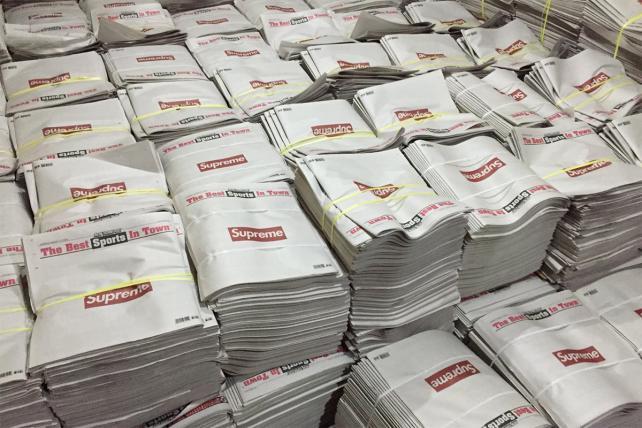 Welcome to Ad Age's Wake-Up Call, our daily roundup of advertising, marketing, media and digital news. You can get an audio version of this briefing on your Alexa device. Search for "Ad Age" under "Skills" in the Alexa app. What people are talking about today:
Here's one way to sell newspapers in the digital age: Turn them into collectors' items by slapping the logo of a super-trendy brand on the front page. The New York Post's minimalistic cover wrap Monday featured the red logo of streetwear brand Supreme and a lot of white space. The papers were snapped up by Supreme fans and by people hoping to hawk them at a markup. As Ad Age's Simon Dumenco writes, there were over 600 related eBay listings. "Given that Supreme is a youth-culture brand, and newspapers are for, well, the olds, the irony of all this not been lost on anyone in media," he writes. Supreme's move also sparked some interesting Twitter exchanges. A public servant in the U.K. was puzzled: "What is a supreme and why would I want to buy a paper without a story on the cover?" Someone else suggested: "Do Chipotle next."

What John Oliver can teach you about travel marketing
The capital of Lithuania has come up with one of the more memorable travel campaigns in recent memory. The campaign refers to Vilnius the "G-spot of Europe." Because "nobody knows where it is, but when you find it—it's amazing." Yes, that's an actual official tourism campaign. Local advertising students dreamed it up to draw more international attention to the city, according to a statement from the local tourism board. (Read more by Quartz on the campaign, which comes as Pope Francis is soon to visit the country. The timing raised eyebrows.)
Comedian John Oliver aired the spot this weekend on "Last Week Tonight," referring to Lithuania as the country "more commonly known as, I dunno, one of the Polands, maybe." He suggested the publicity stunt had worked: "Do you think we were going to spend time talking about Lithuania tonight if they hadn't done this?" Oliver said. "Of course not." The ad apparently inspired him, because he proposed some equally kinky new slogans for Las Vegas, Tokyo and the North Pole. We won't spoil his punch lines; the whole riff is here.

Gone surfin'
How do you attract and keep good talent? "In the agency industry -- where leaders are jousting for talent with consultancies and tech giants like Facebook and Google -- a significant number of shops offer sabbaticals, which are given in addition to regular vacation days," Ad Age's E.J. Schultz writes. Agency staffers have used the extra time off to go surfing in Costa Rica, direct a music video, watch spring training baseball games or just hang out at home. 360i offers a month of paid time off after five years of service. Employees at Edelman can "earn a three-week sabbatical after 10 years and then get another sabbatical every five years, with the time off increasing the longer they stay," as Schultz writes, noting that such perks are not commonplace in corporate America. It all sounds lovely. But …
Wait just a second here: Didn't a sabbatical used to be longer than a few weeks? In parts of Europe, there's a special term for three weeks of paid summer leave. It's called … "vacation." (In France, people are entitled to five weeks of paid time off annually, and much of France's adland is at the beach this month. C'est la vie.)

Money talks
YouTubers have more alternatives about where to post their videos now, on platforms like Amazon's Twitch, Instagram's IGTV and Patreon. And YouTube is reportedly trying a little harder to keep its stars happy and prove that can offer them revenue outlets beyond advertising. As Bloomberg News writes, YouTube

"is paying talent upfront sums to use and promote new features, including paid memberships and an enhanced chat, according to people familiar with the deals. The amounts range from tens of thousands to hundreds of thousands of dollars, said the people, who asked not to be identified discussing terms that aren't public."

The newish chat feature that Bloomberg mentions lets viewers pay a small sum to pin their messages to live streams longer, which is another way for YouTubers to earn revenue. It's similar to a feature Twitch offers.
What YouTube says: YouTube denies that it has a new initiative going on, adding that it has always invested in the success of its creators.

End of an era: WPP is leaving its longstanding headquarters in Mayfair, London, which is "the latest break from former CEO and founder Martin Sorrell," Bloomberg News reports.

D&D: Firstborn and Huge host games of Dungeons & Dragons, and Ad Age's I-Hsien Sherwood joined in with staffers "pretending to be dwarves, elves and magicians in a cooperative, collaborative game of make believe."

The era of elastic waistbands: "VF Corp., which rose to prominence on the strength of its Lee and Wrangler jeans, wants to pivot away from denim to focus on the faster-growing trends such as athleisure and outdoor apparel," Bloomberg News writes.

Picket lines circa 2018: Editorial and video staff at Thrillist, the food, drink and travel website, set their Slack statuses to "strike" on Monday in a collective work stoppage to fight for a new contract. Read more by Ad Age's Garett Sloane.

Ad of the day: Trojan, the condom brand, has a new Trojan Man. He's open-minded, sex-positive and a bit ridiculous, but that's intentional. As Ad Age's Jack Neff writes, he "looks like Richard Simmons' laid-back younger cousin. He's into chimes, flowing robes and vaguely Eastern imagery." A spot from 72andSunny includes a silly song to introduce him: "It's a big sexy world of sex out there," and Trojan Man is our guide to it. Check it out here.

Check out the expanded lineup of speakers for Ad Age's main conference of the year, Ad Age Next, on Nov. 13 and 14 in New York. Early-bird tickets for Ad Age Next are available through Wednesday. Regular pricing starts Thursday.