Plus, Amazon has a new offering for brands 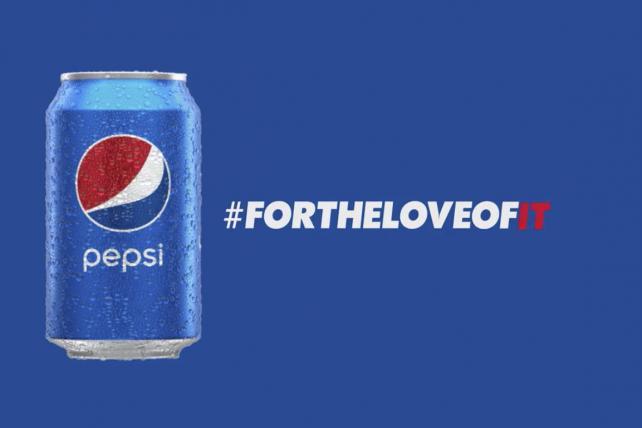 What people are talking about today
Pepsi is saying goodbye to its global tagline, "Live for now," which debuted in 2012 with a Nicki Minaj ad. As Ad Age's E.J. Schultz writes, the new slogan is "For the Love of It." (Not to be confused with McDonald's "I'm lovin' it.") Schultz writes that the new Pepsi campaign "includes a jingle by the Simon Fuller-backed pop group Now United. But the campaign won't run in the U.S., where the cola is taking a separate path that has been devoid of taglines."
One new ad features the Now United gang guzzling Pepsis and dancing in the street. Watch it here, and then just for fun, check out this '80s "Choice of a New Generation" Michael Jackson ad that also features kids guzzling Pepsis and dancing in the street. The more things change, the more they stay the same.

Life in plastic, it's fantastic
Margot Robbie has played Queen Elizabeth I, a DC Comics villainess and figure skater Tonya Harding. Her next role will be as Barbie, the plastic Mattel doll with perma-lipstick and perma-tiptoes. Robbie will also co-produce the live action film, which is being made in a deal with Warner Brothers Pictures Group. Ad Age's Adrianne Pasquarelli writes, "Rumors around a Barbie movie have been swirling for years, most recently in connection to a film starring comedian Amy Schumer." Now it's really happening. Next question: Who will play Ken?
Also: Another celeb-related story from Ad Age today … Mindy Kaling has been writing her own jokes for ads for Fiber One, and they poke fun at annoying diet advice, as Jessica Wohl writes. You can watch a couple of them here.

Free samples
Amazon reportedly has a new program to deliver free samples to consumers, based on customer data about what brands and products might interest them. As Axios reports, some customers have been receiving samples of Folgers coffee or Maybelline makeup. Axios writes:

"Analysts see this as a big advantage for Amazon in its efforts to take on Google and Facebook's ad dominance. The tech giant has the purchasing data and logistics infrastructure to offer samples of actual products, which could be more effective than display ads on Facebook or search ads on Google for certain kinds of consumer packaged goods brands."

One question: If Amazon knows you're buying Folgers Simply Gourmet coffee in natural vanilla flavor, what's to stop it from sending you samples from its own similar AmazonFresh French vanilla ground coffee? Now that Amazon has so many of its own brands, marketers have some tricky questions to ponder.

Super Bowl update
"Anheuser-Busch InBev will flood the Big Game with eight ads, totalling five-and-a-half minutes," E.J. Schultz writes in Ad Age. And yowza, that's a lot of ads. AB InBev, which has exclusive alcohol ad rights in the game, owns brands including Bud Light and Budweiser. Marcel Marcondes, AB InBev's U.S. chief marketing officer, told Schultz that the company is going big this year because the Super Bowl is "one of the few moments when [people] are really watching TV."
Also, a friendly reminder: you can sign up for Ad Age's Super Bowl newsletter here.

Just briefly:
The talk of CES: The Consumer Electronics Show stripped a sex toy of its innovation award, and the hardware company behind the personal massager sees it as evidence of gender bias in tech. Read more by Ad Age's Garett Sloane. (Possible upside for the brand: Many people probably learned about the Osé personal massager because of headlines about CES' flip-flop.)

In other CES news: What does artificial intelligence mean for marketers? Check out Ad Age Editor Brian Braiker's video from CES.

Juul: "Juul, the e-cigarette company that has become ubiquitous among teens, is launching its first television ad campaign targeting adult smokers as it faces criticism that its fruity flavors are designed for underaged users," CNBC writes.

Location, location, location: "T-Mobile, Sprint, and AT&T are selling access to their customers' location data, and that data is ending up in the hands of bounty hunters and others not authorized to possess it, letting them track most phones in the country," Vice's Motherboard reports.

New year, new you: "Facebook CEO Mark Zuckerberg said his personal challenge for 2019 is to host regular public discussions about the future of technology in society," Bloomberg News writes.

For real: Nielsen has backed up Netflix's claim that original thriller "Bird Box" was a massive hit, Variety reports.

Feel-good brand tale of the day: Don't miss this Twitter thread about the Grand Hyatt in Kauai rescuing a little boy's forgotten teddy bear. (The hotel sent the bear home, but first it gave him an extended holiday that included a trip to the salon and some time in a beachside cabana.)

Ad of the day: A duckling idolizes Donald Duck in a charming ad for Disneyland Paris. And then one day he gets to meet his hero. The spot, by BETC Paris, "aims to capture that magical feeling when a child gets to meet its Disney idol, be it Mickey Mouse or Elsa from 'Frozen,'" Ad Age's Alexandra Jardine writes. Check it out here.