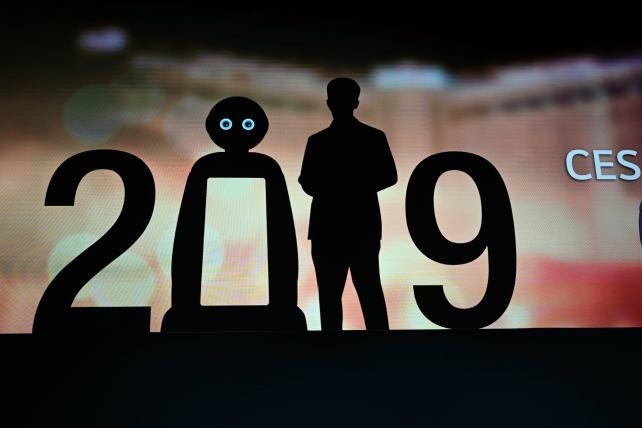 A scene from the LG press conference during CES 2019 in Las Vegas.
Credit: Robyn Beck/AFP/Getty Images

What people are talking about today
The kid who wanted free chicken nuggets from Wendy's no longer holds the record for the most-retweeted Twitter message. The honor now belongs to Japanese billionaire Yusaku Maezawa, who founded an online clothing company called Zozo, and who's got a thing for self-promotion and stunts; he also signed up to be the first private customer on a SpaceX ride around the moon. It's completely understandable that his tweet racked up 5.9 million retweets, since he offered prize money to Twitter users. As The Verge writes, Maezawa's tweet "says he'll personally pay one million yen (about $9,200) to 100 people that follow and retweet him." For a guy like Maezawa, $920,000 is spare change. He once bought a Basquiat for $110.5 million.

The final countdown
There are 26 days left to go to the Super Bowl on Feb. 3. Have you signed up yet for the Ad Age Super Bowl newsletter? No? Here's the link. The latest Super Bowl ad news is that PepsiCo is buying three 30-second ads for the Super Bowl, for Pepsi, Doritos and Bubly, its newish sparkling water (which is pronounced 'Bubbly,' despite the missing "b"). Ad Age's E.J. Schultz reports that Goodby, Silverstein & Partners is handling all three ads. Goodby did last year's fun symbiotic Super Bowl ads for two PepsiCo brands, Doritos Blaze and Mountain Dew Ice (the rap battle between Peter Dinklage and Morgan Freeman). There's no word yet on what the creative will look like this year. (P.S. PepsiCo, if you're doing another rap battle, maybe Millie Bobby Brown from Netflix's "Stranger Things" can do the Bubly bit? Because she's bubbly and whimsical and can rap for real. Just planting a little idea there...)

Gadgets galore
CES officially kicks off today in Las Vegas, though the tech press got an early start hunting for gems among the mazes of shiny (but sometimes gimmicky) gizmos. Already, Kohler has "stolen the show with what will undoubtedly be 2019's hottest gadget: an 'intelligent toilet' with built-in surround sound speakers, ambient mood lighting, and Amazon Alexa voice controls," The Verge writes. "Truly, we live in an age of wonders."

Ad Age's George P. Slefo, meanwhile, reports on how powerhouses like Procter & Gamble and L'Oreal are prowling CES to hunt for startups to invest in. And they're showing off their fanciest devices, such as a P&G toothbrush that connects to your phone and a Gillette razor blade that heats up in one second. The latter, says P&G's Chief Brand Officer Marc Pritchard, "can give you the feeling of a hot towel shave without the barber." Put those on the sink next to Kohler toilet with mood lighting and you've got yourself the bathroom of the future.

Also: What CES innovations are Omnicom execs and CMOs most excited about? Haptic wearables, multisensory commerce and, of course, better batteries. Read it in Ad Age.

Just briefly:
Bye: Red Lobster told Business Insider it will no longer advertise on Tucker Carlson's Fox News show following his controversial comments on immigrants and women. "At least 19 brands have stopped advertising on the show over the last month," Business Insider says.

Hmm: Facebook "is investigating whether an organization backed by internet billionaire and Democratic megadonor Reid Hoffman violated the social media giant's policies when it set up several misleading news pages in a bid to target U.S. voters with left-leaning political messages," The Washington Post writes.

Golden Globes: The ratings are in for Sunday's broadcast on NBC, and the Globes are "TV's most stable awards show franchise. ... Ratings for the show have fallen just 11 percent since 2015," reports Anthony Crupi in Ad Age.

Diversifying: TBWA has a new tool to connect agencies with diverse and women-owned vendors. "The goal is to give those businesses a leg up as agencies build more inclusive supply chains," reports Ad Age's Megan Graham.

Back to school: Ad Age's Garett Sloane looks at how Facebook is schooling Madison Avenue on how to use its scrolling Stories format, which CEO Mark Zuckerberg considers the "future of sharing."

BuzzFeed + Twitter: "BuzzFeed News and Twitter are bringing back millennial-targeted morning talk show 'AM to DM' for at least another year, claiming the show now averages 400,000 views per episode," Variety reports.

Crystal ball: Ad Age's reporters predict what 2019 will bring. Here's one prediction about Facebook, courtesy of Garett Sloane: "Mark Zuckerberg will resign as either chairman or CEO, rather than remain under the harsh glare of regulators and the media. (His hero, Bill Gates, resigned as Microsoft's CEO in 2000 as his company faced antitrust concerns.) If not Zuckerberg himself, look for him to bid adieu to COO Sheryl Sandberg. The spotlight on Facebook is so harsh that only a bold sacrifice can serve as a distraction."

ICYMI: Check out the Ad Age Publishers A-List, which includes the longstanding Magazine A-List and a new set of Digital Publishers A-List honorees: "The traditional and digital-native publishers we're celebrating here are, in short, not only beacons of hope and inspiration, but resilient brands that have proven themselves in a ridiculously unforgiving marketplace."

Campaign of the day: To advertise pre-owned BMW vehicles, Goodby, Silverstein & Partners is recycling old ads from the brand's former agency KBS. Which is bold. As Ad Age's E.J. Schultz writes, "typically the last thing an agency wants to do is reference another shop's work, let alone recycle major portions of it." New voiceovers have been added to the old videos; one explains that the brand "saved so much money recycling this ad we can run it as much as we like, just like the money you'll save on a certified BMW." Check it out here.