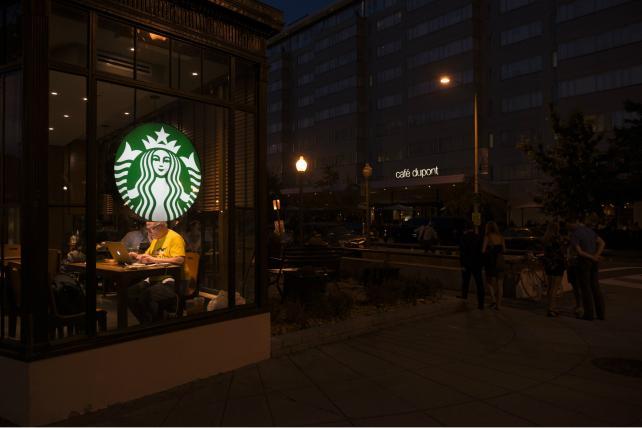 Welcome to Ad Age's Wake-Up Call, our daily roundup of advertising, marketing, media and digital news. What people are talking about today: For one afternoon next month, Starbucks is closing 8,000 U.S. stores to train staff on how to prevent racial discrimination. As Ad Age's Jessica Wohl writes, the education session on May 29 "will be given to nearly 175,000 employees and become part of the company's process for new employees." The step comes after a viral video showed two black men at a Philadelphia Starbucks being arrested; an employee had called police after the men hung out without buying anything (which, of course, is fairly standard practice when you're waiting to meet someone).
Now there's another Starbucks video getting attention, as The Washington Post reports. Shot in Torrance, Calif., in January, it shows a black man claiming he was denied entrance to the restroom while a white customer was given the bathroom code. Neither of them had ordered anything yet. The video was shared on Twitter by activist Shaun King, where it had 2 million views. (King's message read, in part, "Dear @Starbucks, what we are seeing is that your stores have a problem with systemic racism and discrimination.") A Starbucks spokeswoman told The Post that the company takes the California incident "and the commentary surrounding it" seriously.
The arrests in Philadelphia have already dealt a big blow to the company's progressive image, which is why Starbucks is taking the dramatic step of closing so many stores for an afternoon of training. Bloomberg News estimates that the closure could cost around $16.7 million in lost sales.

Do the math
To compete with Netflix and other rivals, TV networks are cutting down on commercial interruptions. But as Ad Age's Jeanine Poggi writes in a deep-dive on the topic, the economics of that are "daunting." And exactly how much extra should advertisers be paying for ads in a less cluttered environment? That's a question ahead of the upfronts, where networks sell commercial airtime for the upcoming season. Fox and NBC Universal are cutting ad loads from some programming and coming up with new commercial products designed to be less obtrusive or more impactful. They're touting "Jaz pods," "Fox blocks" and "prime pods." Poggi has the details on those, adding: "The strategies all sound appealing to advertisers. Then they see the cost."

'Teflon Sean'
Fox News said host Sean Hannity continues to have its "full support" despite his failure to disclose something rather significant -- his relationship with President Trump's personal lawyer. Politico's headline referred to the host as "Teflon Sean," noting that he has survived other controversies and advertiser boycotts.
Michael Cohen, the personal lawyer and fixer for Trump who is under criminal investigation, named Hannity as a client this week. Hannity has downplayed the relationship, saying he has never paid for Cohen's services and consulted with him informally about real estate. Hannity has used his Fox platform to defend Cohen, something some commentators see as a stunning conflict of interest. Deepening the intrigue, The Atlantic writes that Hannity has ties to two other Trump-connected lawyers besides Cohen. (He did once disclose one of those connections, to Jay Alan Sekulow, on the air.)
The New York Times notes other Fox hosts don't get as much leeway, but Hannity has the network's best ratings: "On Monday, his first show since the revelations about Mr. Cohen, Mr. Hannity pulled in 3.7 million viewers, topping his MSNBC rival, Rachel Maddow, and two N.B.A. playoff games," The Times writes.

Just briefly:
The legacy of Sir Martin: What do clients think about the surprise exit of CEO Martin Sorrell from WPP? Ad Age's Jack Neff writes that Sorrell was close to clients, but at the same time, his "legendary pay packages and public comments may not have helped things for WPP."

Not quite natural: Sandwich chain Pret-a-Manger has run into trouble with Britain's advertising watchdog for ads that portrayed its products as using natural ingredients. The Guardian writes that its bread actually uses three additives, E472e, E471 and E300.

Not happening: Toys R Us turned down billionaire toymaker Isaac Larian's bid to save the bankrupt retailer, CNN reports; sources said the offer was too low.

Billions?: A new class-action lawsuit against Facebook for complaints of privacy violations is a "multibillion-dollar threat," Bloomberg News writes.

What? Scandal-tainted political data firm Cambridge Analytica hoped to develop its own virtual currency through an initial coin offering, The New York Times reports. The goal was to raise money to "pay for the creation of a system to help people store and sell their online personal data to advertisers."

Ear buds and tastebuds: Does chocolate taste better if you're listening to Pavarotti? For Ad Age's music issue, Ad Age's Jessica Wohl looks at how marketers are pairing music and sounds with different tastes.

The loos at Lollapalooza: Music festivals use RFID bracelets and anonymized data to track and improve the user experience, like shortening the lines at the porta-potties, as Ad Age's Megan Graham writes.

Creativity pick of the day: A Mondelez chocolate brand paired up with Wieden & Kennedy Amsterdam to make an old-school board game, as Ad Age's Alexandra Jardine writes. It's called Milka Biscuit Run, and there's "not a VR headset or interactive element in sight." Check it out here.

Ad Age is now accepting applications for our U.S. edition of Women to Watch, celebrating executives in media, marketing and advertising who have had notable accomplishments within the past year. Nominations close April 26.