Walmart.com's march to catch Amazon in e-commerce and integrate online and offline offerings is entering some new fronts and generating sometimes surprising results as the company prepares to launch the latest in a spate of new initiatives -- Goodies, a subscription mail-order-sampling program.

Goodies, set to roll out within about a month, will initially focus on artisan and other food products but could expand to other product categories, said Neil Ashe, CEO of global e-commerce for Walmart, in a press briefing in Rogers, Ark. The briefing was part of the retailer's "Shareholders Week" events prior to Friday's annual shareholder meeting. 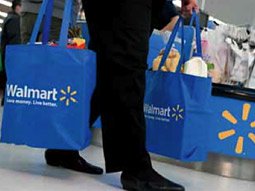 The monthly subscription price has yet to be determined, he said, adding, "think of it as cheap." Initially, Walmart.com will choose the products to include in the box, then monitor how popular they are based on reorder activity. Mr. Ashe likened Goodies to the Birchbox program for cosmetics, and if it gains traction, he said marketers may be willing to pay to include their products.

Mr. Ashe, who took the top Walmart e-commerce job in January after running CBS Interactive, noted that he didn't have much retail experience coming in, but joked that he had worked in his father's small retail store in Knoxville, Tenn., when he was growing up. And in one of his first public appearances since taking the high-profile e-commerce role, Mr. Ashe laid out his vision for Walmart, which includes making considerable use of having the world's biggest combination of online and offline retail assets.

One way Walmart.com is doing that is by applying the social analytics developed by its @WalmartLabs e-commerce and mobile R&D unit. Mr. Ashe said that includes mining every tweet it can find from the brand's 16 million-plus Facebook fans. That analysis earlier this year helped identify a cake-pop maker as a popular item among shoppers.

"We were able to get those into stores immediately, and they were big sellers as a result," Mr. Ashe said. "We probably never would have found that product without the Twitter feed."

"In many ways, the ethos of Walmart and ethos of the internet are exactly the same," Mr. Ashe said, including the focus on the lowest possible price. "When I looked at the company from the outside, I couldn't think of a company that was better positioned to be successful in the transition to the internet or e-commerce than Walmart."

Walmart is seeing strong results from the most recent upgrade of its iPhone app, including an in-store GPS feature that lets people find products in stores. App downloads have tripled since the latest upgrade, and 10% to 20% of users are using the in-store GPS feature, said Gibu Thomas, senior VP-mobile and digital of Walmart. Only available on the iPhone now, the GPS feature should be available on Android and other devices within weeks, Mr. Thomas said.

"There's probably no way to overstate the importance of mobile over the next 10 years in e-commerce," Mr. Ashe said. "And we intend to play to win in mobile." But much of that victory will come from efforts that tie mobile to the store, such as in-store GPS.

A recently launched "pay with cash" program, Mr. Ashe said, is opening Walmart.com to "a whole segment of the population that 's being ignored for no apparent reason."

The product is still shipped to homes, though customers pay with cash at Walmart stores.

"One of the more interesting things about this that we didn't expect is that only 60% of the people actually pay with cash," Mr. Ashe said. The other 40% are simply people uncomfortable giving their credit-card numbers out over the internet.

So the customer base drawn by the program is a combination of the "unbanked" without credit cards or checking accounts and those afraid of identity theft, said Joel Anderson, president of Walmart.com U.S.

Walmart.com actually identified the need for the program, he said, when it tested Walmart.com stores in strip centers in California last year and discovered many people were buying MoneyPak or other cash cards in stores and then using the computers in the stores to order products to ship home, Mr. Anderson said.

"What hasn't moved online yet are the true grocery and consumables categories," Mr. Ashe said, adding, "it may never get all the way there." But he said the Walmart-To-Go home-delivery service the company is testing may be a way to help that happen.