What you missed at Day One of Advertising Week: Tuesday Wake-Up Call | Ad Age
Skip to main content

What you missed at Day One of Advertising Week: Tuesday Wake-Up Call

Also: Pumpkin spice Spam is a thing
READ THIS NEXT
Brands want to replace racial stereotypes on packages. Not all customers agree 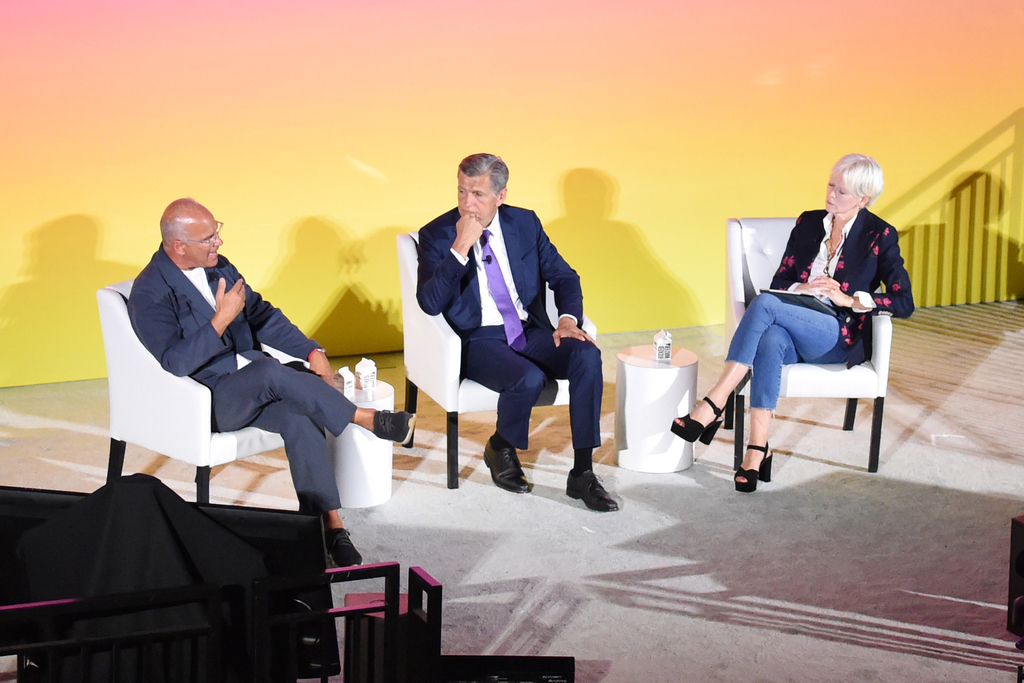 Day One of Advertising Week
If you skipped the first day of Advertising Week New York, you missed some hassles (long lines of attendees snaking down stairwells) and high points (the opening concert with girl group TLC, who sang “No Scrubs" and allowed everyone to relive 1999). The mega-conference also played host to some spirited discussion about the future of advertising. Ad Age’s Lindsay Rittenhouse reports that veteran magazine editor Joanna Coles had tough words for the industry:

“People hate advertising, they fucking hate it, and it’s all advertising’s fault,” said Coles, the former Hearst chief content officer who is at work on a new platform called Boudica for women in the corporate world. She spoke on a panel with Procter & Gamble Chief Brand Officer Marc Pritchard and RadicalMedia Chairman-CEO Jon Kamen. Coles said, speaking directly to Pritchard and Kamen, that consumers take every opportunity to skip ads or subscribe to ad-free streaming platforms because “you oversaturated” them.

Pritchard and Kamen think branded entertainment is an answer; they just worked on a P&G docuseries in partnership with Global Citizen and National Geographic. “We need to move the ad world out of its own world, and blend it with filmmaking, journalism, technology, music, comedy and just storytelling,” Pritchard said.

In which case, would the ad world still need Advertising Week?

More Advertising Week deep thoughts
On “brand purpose”: Diego Scotti, Verizon’s chief marketing officer, said his company chooses to support issues that "have a strong connection to what we do ... or it will look like B.S." Read more by Lindsay Rittenhouse in Ad Age.

On the new brand landscape: Nowadays, “there’s a low moat—anyone can jump in and start a brand,” said Nate Checketts, co-founder and CEO of Rhone, a performance menswear brand. “It’s easier than ever before to build a $5 million, $10 million business. But it’s harder to go from there to a billion-dollar brand for the same reason.” Read about the panel on direct-to-consumer marketing by Ad Age’s Adrianne Pasquarelli.

On new industry lingo: “Cultural Insights Impact Measure" is a new metric from the Association of National Advertisers that “gauges the cultural relevance of an ad and the extent to which it reflects genuine insights that speak to consumers of all backgrounds,” Ad Age’s I-Hsien Sherwood writes.

But wait, there’s more Advertising Week news: Read about Cirque du Soleil’s special relationship with its agency, Sid Lee; get behind-the-scenes info on “The Look,” the emotional Procter & Gamble ad; and learn about Roku’s new way to measure commercials, both in-app and on linear TV.

New logo alert
Yahoo has a new logo, with letters that are compact, lower-case and sans serif. There’s still an exclamation point after the name. “As with the original logo, the new identity captures the voice of a brand named after an exclamation of joy and discovery, and still looks like it should be shouted or yodeled — ‘yahoOOOOoooo!’” says Pentagram, which designed the logo. As Ad Age’s George P. Slefo writes, this is the Verizon-owned brand’s third logo since its founding 24 years ago. The logo is quite optimistic-looking, though Yahoo isn’t what it once was. For what it’s worth, Yahoo Japan (which has untethered from the U.S.-based brand) still rocks a vintage logo that old-timers may remember from the early days of the brand. Funnily enough, it also remains a major internet player in its home country.

Just briefly:
Ad-free apps: “Google is launching a new service called ‘Google Play Pass,’ which for $4.99 per month gives Android users access to more than 350 games and apps that will be served ad-free and without any in-app purchases,” The Verge writes.

Juul gets (even more) scrutiny: The Wall Street Journal reports that federal prosecutors in California have launched a criminal probe against vaping company Juul Labs. It's still unclear on what the investigation is focused.

Another fashion-world controversy: Gucci is getting flak for a Milan runway fashion show show in which models wore outfits that looked like straightjackets, Adrianne Pasquarelli writes in Ad Age. One of the show’s models spoke out, saying it trivialized mental health issues.

The art of branding: Snap’s legal team kept a dossier about Facebook and its alleged moves to thwart the Snapchat app, The Wall Street Journal writes. The name of the files: Project Voldemort, after the “Harry Potter” villain.

Meanwhile on TV: Ratings for Sunday’s 71st Primetime Emmy Awards on Fox hit an all-time low. But maybe the networks don't actually mind, “given that the broadcast now functions as a three-hour infomercial for the streaming services and premium cable networks that are gobbling network TV’s lunch,” Ad Age’s Anthony Crupi writes.

Worth a read: Ad Age’s Jack Neff writes about a Cincinnati-based sex-toy brand that’s helping fund programs for transgender children. The CEO has a personal connection to the cause.

Product of the day: Pumpkin Spice Spam is a real thing, and it was released Monday, the first day of autumn in the Northern Hemisphere. “The limited-edition flavor features a blend of seasonal spices including cinnamon, clove, allspice and nutmeg to give it a subtle sweetness,” Hormel Foods, maker of Spam, writes in a news release. Two-packs for $8.98 were released on Spam.com (Spam.com!) as well as Walmart.com, and they sold out in fewer than seven hours. Ad Age’s Jessica Wohl asked Hormel exactly how many cans were sold total, and the company declined to say. It was more forthcoming about serving suggestions. “Consumers who have sampled the product have noted it's an ideal pairing for popular brunch dishes like savory waffles, frittatas and breakfast burritos,” the release says. Thanks but no thanks, Hormel.