Rewind: Brooke Shields' Calvin Klein Ads From Back in the Day | Ad Age
Skip to main content
Sign In Register

Rewind: Brooke Shields' Calvin Klein Ads From Back in the Day

Passing of Star's Mother and Manager Prompted a Look at the Controversial and Sexy Campaign
READ THIS NEXT
#TBT: The Time Ad Age Went All-In for Gun Control

Can you contort your body -- roll upside down onto shoulders and tuck in knees -- while solving a math problem? Then, try it in a pair of super tight, high-waisted jeans.

Such was the talent of then-teenage actress Brooke Shields in a controversial 1980 Calvin Klein jeans campaign shot and directed by photographer Richard Avedon.

The success of the campaign, for both Ms. Shields and the brand, would have been impossible without stage mother Teri Shields, who passed away last week. Their ascent came with the rise of the denim pioneer that , while today would be considered staid, was responsible for introducing the concept of designer jeans to the U.S. market.

Perhaps Ms. Shields' mother had foreseen the career-launching power of Calvin Klein's fearless marketing, which, 10 years later, also catapulted actor Mark (Marky Mark) Wahlberg. Or perhaps she was just a stage mom jumping at another opportunity for her daughter, whom she placed in front of the camera at a mere 11 months old for an Ivory soap commercial. Either way, the campaign series generated major PR buzz for the brand and for the teen actress. 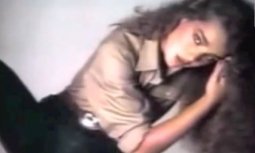 You want to know what comes between me and my Calvins? Nothing!

One spot featured Ms. Shields reading a dictionary in which she discovered the derivatives of the word Calvin. In another, she reads a passage from a novel and proclaims, "Reading is to the mind what Calvins are to the body." (There's a little compilation of these you can see here. ) And then Calvin Klein and Mr. Avedon crossed the line with the cornerstone spot in campaign, which Ms. Shields says, "Do you want to know what comes between me and my Calvins? Nothing!"

Pondering the thing the nothingness that got between Ms. Shields and her Calvins sent a few networks, including CBS, into shock. They wouldn't run the ad. But for Calvin, buzz around the entire campaign, including the too-sexy-for-TV spot, contributed to sales of $2 million per month, according to a Vogue 2011 article, which referred to Ms. Shields' in the ads as "Lolita-esque" and the pulled spot as "one of the most memorable commercials ever."

The Justice Department at one point launched an investigation into the brand's exploitation of young models and eventually dropped the case.

To the Shields duo, however, the campaign was as innocent as Shirley Temple and as much a win for the teen's acting career as it was for the brand. Ms. Shields had had nude photographs taken of her daughter when she was only 10 years old, and a few years later encouraged her to take the controversial role of a child prostitute in the film Pretty Baby. After that came the Calvin spots and then an acting career we can thank for the Caribbean jungle masterpiece Blue Lagoon.

Rewind: When Miller Genuine Draft, Not Bud, Was 'Macro'

Rewind: Before Bieber, There Was Marky Mark for Calvin Klein

Rewind: Kids Bite Dog in The Second-Greatest Hot Dog Jingle of All Time

Rewind: Before Ray-Ban Ruled, the Question Was Who's Behind Those Foster Grants