In a sign that emerging markets are winning more attention on the awards circuit, the Grand Prix in the media category went to a campaign out of South Korea. Cheil Worldwide took top honors for work created for Homeplus, its local version of Tesco stores. 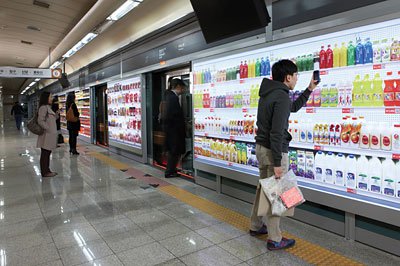 Cannes Lions International Festival of Creativity CEO Philip Thomas said it was a significant win. While South Korea has taken home hardware over the 58-year history of the Cannes Lions advertising awards, it has never snagged the top prize. It's the second time an otherwise oft-overlooked market has been a winner at Cannes this year; the South Korea win follows on the heels of Romania winning two Grand Prix.

What it is : The "Homeplus Subway Virtual Store" was an idea conceived by Cheil to help the retailer get an edge over its larger rival, E-mart. Instead of trying to persuade consumers to visit the store, Cheil had the idea to bring the store to busy, hardworking people. It recreated lifelike images of store aisles in subway stations that were interactive and allowed people to shop from the store simply by taking pictures of the products with their mobile phones. Their orders were later delivered to their homes. Although engagement with the idea was only in the tens of thousands, online sales for Homeplus jumped by 130%, the client said.

Why it won: The effort captured a trend that sees the convergence of innovative media and shopper-marketing ideas, and solved a real business problem for a client.

The jury: Maria Luisa Francoli Plaza, the global CEO of Havas-owned media agency MPG, led the massive 30-member jury, which included three executives from OMD, and two each from Mindshare, Starcom and MPG.

Controversy or clear winner? "It was pretty unanimous. ... When we saw this case most of us appreciated the difference and the consumer insight," said Ms. Francoli Plaza. While there was wide agreement about which agency and campaign should be awarded the top prize, the topic of effectiveness and to what degree results should be factored into the deliberation process prompted much debate, the jurors said. (In the end, effectiveness wound up taking a backseat to creativity.) Other standouts in the category were efforts on behalf of not-for-profit. A World Wildlife Fund campaign called "Save as WWF" by Jung von Matt, Hamburg, that aims to save paper resources via a PDF that can't be printed, took home a Gold Lion. Hakuhodo also won a Gold for an effort in the Iwate Nippo newspaper designed to help lift the spirits of those devastated by the earthquake and tsunami earlier this year.

Total Lions: In addition to the Grand Prix, the jury gave out 14 Gold Lions, 31 Silver Lions and 38 Bronze Lions.

A growing category: Media, which has been awarded since 1999, this year saw a huge jump in submissions -- 34% over last year -- with a total of 2,895 entries from 67 countries. "The increase from social media are bringing more cases that are suitable to be presented here," noted Ms. Francoli Plaza, adding that the increase is also a reflection of the fact new countries are entering, and winning, in the category. All the jury members strongly felt that the category will continue to see increased entries going forward. So the key thing to watch, as one juror pointed out, will be how the festival will handle the volume, not only in this category but for all the growing categories.