We asked Cannes clairvoyants which work is destined to win big
READ THIS NEXT
The real worry isn't machines thinking like humans; it's humans thinking like machines

We asked industry leaders from Chicago to Mumbai, including some Cannes Lions jurors, to share their thoughts on what might bring home the bling at this year's festival. They cited work ranging from big productions—like Tide's Super Bowl extravaganza, Nike's ode to London athletes and Apple's HomePod music video—to simple ideas with impact, including Lacoste's logo remix and KFC's three-letter chicken apology.

Tide's Super Bowl campaign, which spanned four quarters and stars "Stranger Things" actor David Harbour, co-opts ad cliches and mascots, including the Budweiser Clydesdales and Old Spice's "The Man Your Man Could Smell Like." With a wink and a nod, its goal is to trick people into thinking they are watching a commercial for something else.

A simple idea coupled with a smart media buy. The work resurfaced something that had been lost in our country's current climate: humor. While many brands are still weighing the risk/reward of producing provocative content, sociopolitical or otherwise, P&G saw an opportunity to be funny, and went for it. Coupled with great placement throughout the Super Bowl, the ads successfully caught your attention and sold the product, which is precisely what it's supposed to do.

It kind of brings back some of the things that were so charming about advertising when advertising first started—the bravado and the madness. It's nice to see something funny and ballsy that takes you by surprise.

I have to admit, when I heard Tide was doing another Super Bowl campaign, I asked myself, "How the heck are they going to beat 'Bradshaw Stain'?" But they did it, and in the grandest way. If you're on a jury and don't award it a gold, shame on you!

They hijacked every ad and made people think it's a Tide ad—in a tough category, laundry care, on the most competitive stage. It's genius.

Lacoste
"Save Our Species"
BETC Paris

The French brand swaps out the crocodile with logos depicting 10 endangered animals in a limited-edition line created in partnership with the International Union for Conservation of Nature.

Replacing their ubiquitous logo to highlight endangered species was a neat, simple idea, as well as a brave move for the iconic brand. 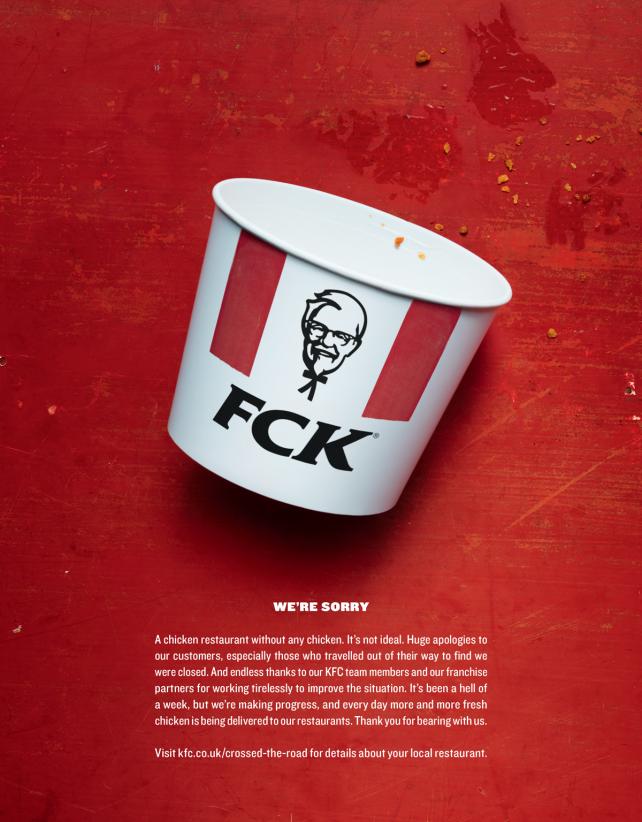 When a chicken-delivery snafu in Britain this past winter temporarily shuttered hundreds of KFC restaurants, the company begged for forgiveness by screwing with the letters of its own name. The full-page ad features a KFC bucket with the letters rearranged to form "FCK" and copy apologizing for the mess.

No chicken at KFC? A great print ad? Is this the apocalypse? This cheeky apology in British newspapers was a genius way to put a smile on angry customers' faces.

KFC's PR response was the most honest and brilliant crisis response ad in the last year ... decade ... actually, ever.

As two people born and bred in London, [we think this] is a stonking, properly rousing piece of work. But, speaking to our colleagues from around the world, it just doesn't have the same relevance. Will it win a GP? Probably not. Should it? Yes.

In deliberations between judges, we'd expect the conversation to be around ideas that have pushed a media channel or craft to new limits. In Film, we would like to see Nike's "Nothing Beats a Londoner" pick up [a Grand Prix] for the edit alone, or for the entertainment value that keeps its audience gripped for the full three minutes.

This deserves something shiny. It's been many years since I've lived in London, but it made me proud to have called the place home. It also made me laugh, particularly the Peckham dig. Great to see a major brand getting so targeted.

This rollicking launch campaign introduces a new kicking skill in the "FIFA 18" video game that became a cultural phenomenon, internet sensation and meme. Created by the agency and EA Sports, the El Tornado move is described by the brand as a "seamless dragback, flick, and spinning volley."

There have been so many great football ads—they're far more exciting than an actual game—but the challenge [to make another great one] has been met with this one. I haven't tried the kick, but I'm sure many have. A great example of integration.

Last year, Brazil consumer group Reclame Aqui and Grey Brazil developed a browser plug-in that highlights the names of the country's allegedly corrupt politicians and explains charges against them in a pop-up box. This year, ahead of Brazil's 2018 general election, they debuted a new app that allows citizens to access such information through facial recognition.

The concept is straightforward and effective. In our new world of "fake news" and "alternative facts" this app allows you to easily access truthful information and assists you in making one of the most important decisions of your life: for whom to vote. Well, at least in Brazil.

Doubling as a pregnancy test, the ingenious print ad features the brand's Sundvik crib. If the user is pregnant, the price shown on the ad drops, reflecting a discount offered to those in Ikea's Family Club.

This is a pretty good year for print ads. So good, you'll want to pee on some of them. This smart ad in Amelia, a Swedish women's magazine, is also an interactive ad. In case you're wondering, it really works. I tried it. I'm not pregnant.

Spike Jonze's Apple ad is a personal favorite. It's rare that an all-singing, all-dancing film comes along, but this ticks all the boxes.

Such a beautiful and brilliant piece of storytelling, built on a simple insight. I loved it the first time I saw it. I loved it even more when I found out that all the effects were in-camera.

This pro-diversity stunt removed all foreign food from one of the German supermarket chain's stores to show how what people eat comes from all over the world.

A straightforward and extremely current experiment showcasing the benefits of internationalism that should do well in Cannes.

This music video for The Academic's "Bear Claws" played with the Facebook Live delay to create a mind-boggling, multilayer sound and visual experience.

This is one of the coolest hacks ever. Irish band The Academic used Facebook Live to create a never-been-done performance by manipulating the audio/video delay to create a mind-blowing visual loop and it made me a fan of a band I had never heard of before.

Palau, the 13th-smallest nation in the world, sees eight times its population in tourists each year. This simple idea requires visitors entering the country to sign a "passport pledge" noting their commitment to help preserve the country's environment during their stay or risk a fine. And children wrote the pledge.

They could have done the classic "don't litter" campaign, but the creative solve here went deeper and beyond. Every country should do this. Every execution is crafted thoughtfully and beautifully.

Tourists, they keep economies thriving. At the same time, they cause irreversible environmental damage to fragile paradise spots like Palau. This very analog idea welcomed tourists and changed their behaviors with a simple signed promise in their passports.

What less-visible work do you think people should know about?

A dark and funny music video from Egypt that features elderly and sickly men encouraging their home teams to win the 2017 World Cup Qualifiers because, well, they may never get another chance to see them to glory.

This is a beautiful example of tapping into a cultural insight and demonstrating a comprehensive understanding of human behavior. ... Orange created a platform that allows the brand to play a meaningful part in the World Cup conversation. The moment Mo Salah, "the Egyptian king," steps onto the field ... the nation will erupt with excitement, and Orange will be at the epicenter of that enthusiasm. It's certainly one to watch. 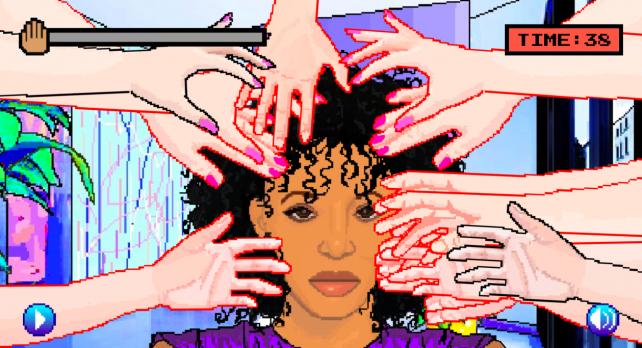 Wieden & Kennedy Art Director Momo Pixel created this game to show how black women are tired of people touching their hair without permission, and how it violates their personal space.

There's one big no-no when it comes to a woman's personal space: Never touch her hair! [But] people feel they have every right to, particularly if the woman happens to be black. [This game] allows the player to swat away hands that are coming to touch its hair. It so simple, so unexpected and it deserves all the awards it gets.

This spot aims to bring soul to Adobe Photoshop CC's brush tool by creating an exclusive digital brush set based on what Norwegian master Edvard Munch painted with.

There are certain pieces of art we all know and love. These works transcend time, living on to influence modern creatives and society as a whole. But we rarely think about the tools that were used to create those masterpieces

I'm dreaming of our industry celebrating a real ad, done with a real CMO, working with real creatives from a real agency, selling a real product from a real brand with real consumers ... and, particularly, judged by real creative talents. I'm also dreaming that it would make us laugh without even thinking about saving the world, the whole Palais des Festivals bursting with laughter, saying, "Oh shit ... they've really done this!?" I hope we can bring back a little bit of this subversive and provocative spirit ... this cheeky smile that our industry used to have. Brilliance is not just about being serious, and values don't need to be sad.