Inside Snapchat's new pitch to video advertisers: A penny a view | Ad Age
Skip to main content
Sign In Register

Inside Snapchat's new pitch to video advertisers: A penny a view

Snapchat has been on a Madison Avenue charm offensive that is culminating in Cannes this week, where the company will be rolling out a video advertising program called Snap Select. A recent pitch deck for Snap Select shows that the ads cost less than half of what Facebook is charging for its comparable video ad product. Meanwhile Snapchat is touting full-screen, vertical videos as the superior format among rivals.

Snapchat sent CEO Evan Spiegel to the French Riviera this week, coinciding with the official launch of the new video ad offering, which premiered in April but has yet to roll out widely. Snap Select is Snapchat’s competing offer to Facebook’s “in-stream reserve” and Google Preferred. All three are ways to buy premium video ad inventory while guaranteeing delivery to a set number of people—a method of ad buying that brands are used to in the TV landscape.

“It’s premium content that is cherry-picked, so it’s supposed to be brand safe and it comes at a premium price,” says Alyssa Allen, group media director of social at AKQA. “Delivery is predictable, too.”

The pitch deck, provided by a person familiar with Snapchat’s ad sales team who shared it on condition of anonymity, shows Snapchat is charging as low as one cent for every completed view of the 6-second commercials. That comes to between $10 and $14 for a thousand views, which is less than half of what Facebook commands for in-stream reserve, the method of buying guaranteed ad space in Watch, the YouTube rival video platform.

In May, Snapchat's new head of global agency partnerships David Roter held a private conference in New York with about 150 video buyers to pitch them on buying the commercials on the original shows in the app. Snapchat brought in hosts from some of the programs from ESPN, Viacom and NBC.

"It was our opportunity to talk a little bit deeper about the product than maybe we had in the past," says Roter. It was away to "tease" Snap Select, he adds.

Meanwhile, Facebook hosted similar advertising huddles in April, and YouTube and Twitter hosted their yearly NewFronts presentations around the same time. The new digital players want to position themselves as alternatives to TV, providing platforms for top media companies and Hollywood studios to produce shows while giving advertisers guarantees on the sizes of audience they can reach and at what costs, taking away some of the unpredictability that is typically inherent to automated digital advertising.

Snapchat’s pitch deck says it reaches 60 million people a month in the U.S. on Discover, the section of the app with shows from media partners like Condé Nast, Hearst, Buzzfeed, Discovery and others.

In a recent pitch deck for Watch shows, Facebook claimed it reaches 100 million people a month on the shows that are part of the in-stream reserve program.

Meanwhile, as a backdrop to these conversations, the digital platforms are trying to overcome negative perceptions regarding brand safety, by offering a way to buy ads that controls where they run: Snapchat’s pitch deck plays up its brand safety measures, as it preapproves all partners that can produce for the Discover media section.

One slide in the pitch deck also shows Snapchat is still promoting the fact that video ads run in the vertical position, as people typically hold their phones in portrait mode. Snapchat compares that to YouTube, Facebook and Twitter, where videos are often viewed horizontally, not occupying all the space available on screen unless the viewer rotates their phone.

“Now that we can reserve the premium and brand-safe inventory, it will be an exciting opportunity to understand how this offering compares to similar offerings on other social platforms,” says Danisha Lomax, VP and director of paid social at Digitas, in an e-mail. “As these opportunities scale on social, it will also be interesting to consider how it could, in some cases, replace and even compliment broader traditional buying.” 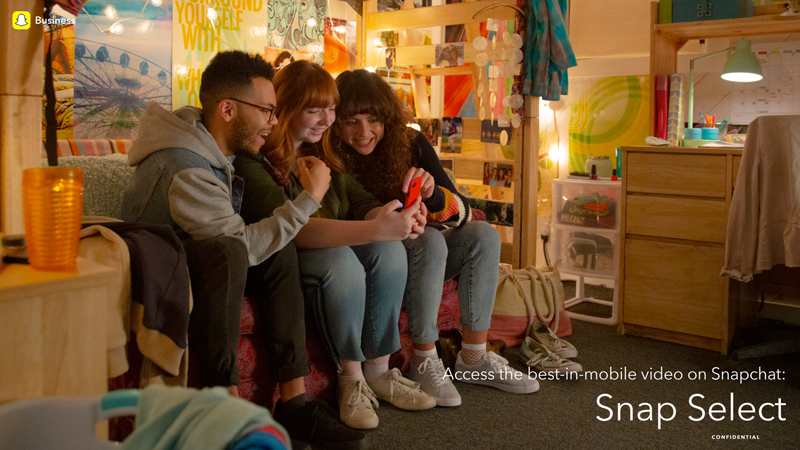 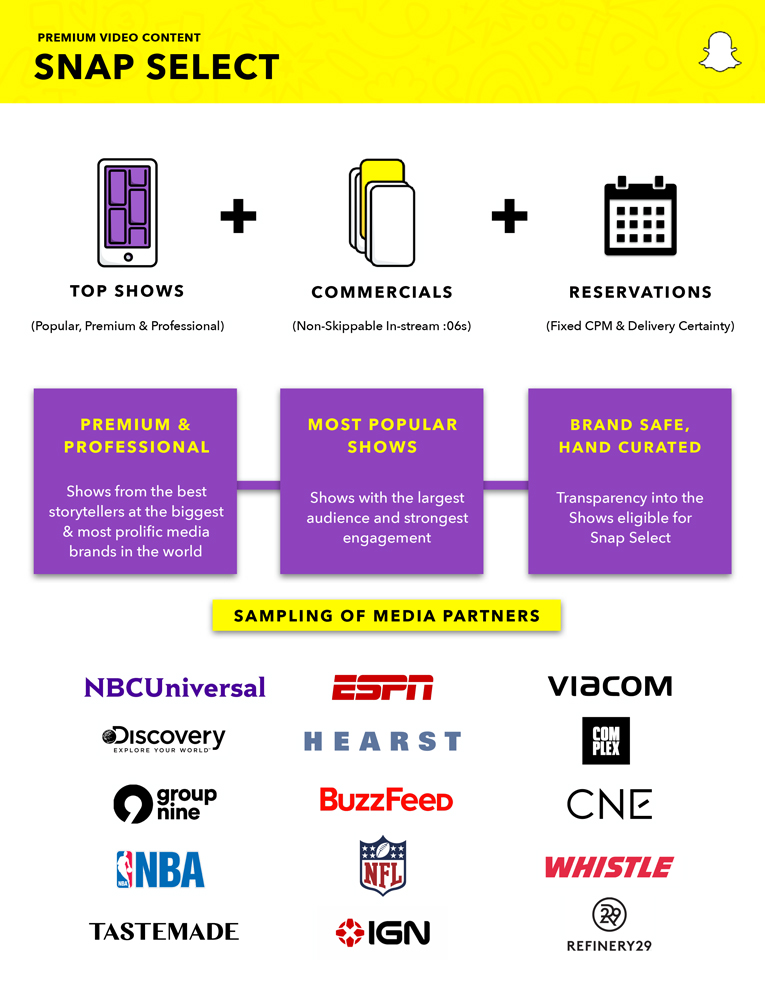