Why an ancient Venus figure is our Cannes cover girl

Here’s the thing about the Venus of Willendorf: Nobody actually knows what she is. Since being dredged from the muck of an Austrian excavation site in 1908, the oolitic limestone figurine has been taken for a religious figure, a good-luck totem, a fertility symbol, an aphrodisiac, a self-portrait and a sex toy. She is perhaps some permutation of all those things. Whatever she was when she was carved circa 30,000 BCE, though, today she is a female tabula rasa, a blank slate of femininity.  And now, she’s our cover girl. 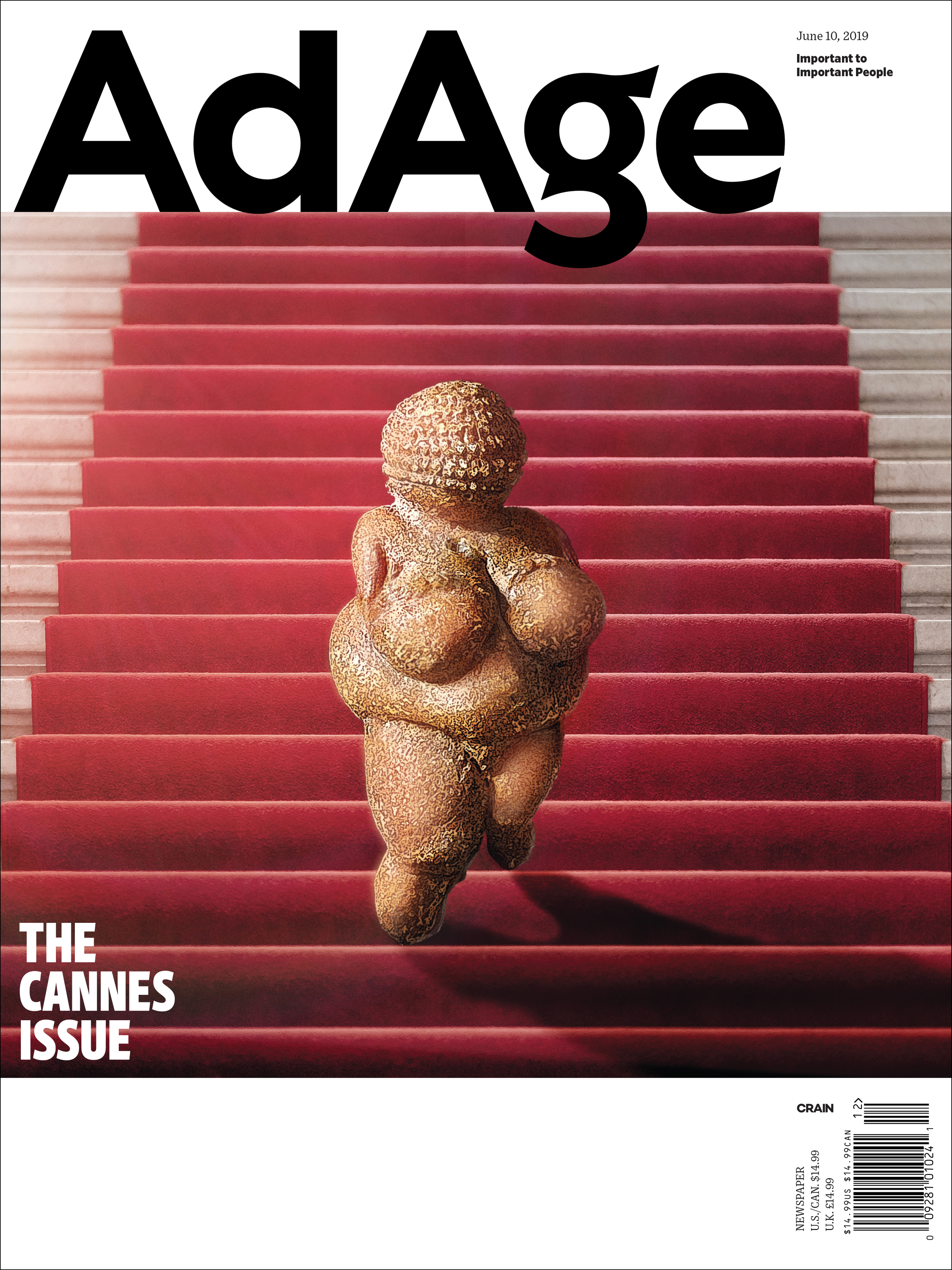 The image on the front of this magazine is the winning selection of Ad Age’s 10th annual cover contest for young creatives. Every year we invite working creatives under 30 from all over the world to answer a brief. This year’s call to arms, in partnership with Dove, Getty Images and Girlgaze, was deceptively simple: “Create an Ad Age cover image that communicates the power of truthful representation in advertising, creativity or the broader cultural world.” More specifically, the assignment was to design an image that shows the impact of a more inclusive idea of beauty.

And the winner is ancient. Timeless yet timely. Footless and fancy-free. It is a depiction of the ur-Venus, our empty vessel of fabulousity, strutting (Or is she limping? Does it matter?) down the red carpet. The work works.

In all, 714 young creatives entered our contest. And after much deliberation among a jury of nine Ad Age staffers led by Creativity Editor Ann-Christine Diaz, we selected Arnel Villanueva as our winner.

An associate creative director at BBDO Guerrero in Manila, Philippines, Villanueva says he tried to submit for last year’s contest, too, but missed the deadline. “This was my last opportunity to join the young creatives,” he notes; this time next year he’ll be 30, thus ineligible.

His winning work, a digital painting, is called “The Imperfect Stunner.” (For the record, we did not know the name, sex, nationality or gender of any of our entrants before selecting the winner.)

“When I heard the brief, I thought of the Willendorf Venus,” says Villanueva, 29. “She has exaggerated breasts, buttocks and thighs. She walks confidently in her own body.”

For Villanueva, “the power of truthful representation in advertising” boils down to this idea of ownership. She owns her body; she owns her stride. Her truth is whatever she wants it to be.

To be clear, this isn’t about idolatry or fetishism, past or present.

“Our time calls for no more idealistic and ‘perfect’ representations of the body,” says Villanueva. “Even if you’re the opposite of what the ideal of the day is, you stand out. ... People have become mature enough to know what to sympathize on. Nowadays they’re latching on to messages that are authentic and speak for themselves.”

Look no further than our runners-up. They hail from around the world—from the Dominican Republic to India, from Brooklyn to Cincinnati. Their tone ranges from despairing to bright. Some made use of the stock photography provided by Getty—to brilliant effect. Others, like Villanueva, created original illustrations. Overall, the art tackles ageism, ableism, body-shaming, whitewashing, unrealistic standards, conformity, giving voice to the voiceless.

Many entries spoke directly to the power of representation and the responsibility of the industry to speak to—and reflect—everyone.

“Advertising shapes society’s expectations and the values of future generations,” Melina Filippidou, a student in London, writes in her submission. “Let’s teach children that beauty is about diversity, not perfection.” Her cover depicts a young black girl adorning her wall with images of people of all shapes, sizes, colors and abilities. An aspirational rainbow.

Johanna Granlund, a student in San Francisco, weighed in on ageism. “We learn at a young age that older people, and especially women, don’t really matter in society after a certain age,” she writes. “It is ingrained in the advertising industry how we portray and perceive older women.” In her submission (in which the “Ad Age” masthead became “Ad Age-ism”), a portrait of a hip and handsome older woman is set against a swirl of art director critiques: “Too old to lead … Too old to wear heavy makeup.”

To be honest, some of the entries seemed a tad kumbaya and occasionally cliché. But if these voices, as a whole, are the future of the industry, we’re heading in a good direction.

The rest of our Cannes Lions Issue focuses on the creative here and now. And, of course, media, marketing and advertising are all beset with challenges. But as the ad world pauses to celebrate the best it had on offer this past year, it’s nice to think that maybe 32,000 years from now someone will dig one of our artifacts from the muck and find new inspiration.

Provided there are any of us left.