If you elbow your way past the "LOL" and "Trashy" tags on Buzzfeed's homepage, past its cadre of shiny new journalist hires and past the CEO whose tech celebrity has ascended to the point that he's known simply as "Jonah" in New York startup circles, you're staring at one grand experiment in advertising.

Started by Huffington Post co-founder Jonah Peretti, the site began as an internet trend-tracker and meme-creator, and aspires to be so much more. Buzzfeed is already relevant from a traffic perspective. It had 8 million unique visitors in January, per ComScore (though the site claims it has nearly 25 million unique visitors), and in the past few months has raised $15.5 million. That fueled a round of splashy journalist hires, punctuated by the arrival of Politico's Ben Smith, to help the site break news stories in various verticals. 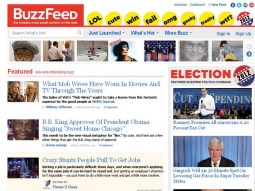 BuzzFeed was born as a Web trend-tracker and meme creator.

Now the focus will be how well Buzzfeed sells advertising. It's betting that more and more brands will move larger and larger pieces of their digital budgets from display and into what's being pitched as "social advertising." It knows that to meaningfully engage consumers in this digital, social world, brand messaging needs to be in a form that 's native to the medium and evokes what the brand stands for rather than what it sells. And, of course, it's banking that if you want that content to be shared online from friend to friend, from coworker to coworker, Buzzfeed is the best site to make it happen.

The company's pitch to brands is straightforward: We'll work with you to create content, and help it go viral by tracking which items are shared most among certain social circles and then pushing the content getting the most "viral lift" into more prominent positions on Buzzfeed.com. That piece of content could be a list of "10 Upcoming Movies that Are Perfect for Date Nights," sponsored by K-Y, or a map showing 50 different meals -- one for each state -- that can be made with Crescent Rolls, brought to you by Pillsbury. (Both real examples.) On Buzzfeed's homepage, the headline and intro for branded content is slotted into rectangular slots between editorial content. The only distinction is the yellow shaded background on the branded units and the "Featured Partner" tag in the corner.

For brands that need more scale, Buzzfeed extends campaigns offsite, using technology to target segments of its own super-sharing community with ads on third-party sites. It also creates ads to run on social platforms such as Facebook, Twitter and Stumbleupon. This now accounts for 20% of revenue.

"What we're doing is still new in the market, and we don't do IAB [Interactive Advertising Bureau] units, only these social-advertising campaigns," Mr. Peretti said. "But there's still a huge amount of money going to the standard IAB stuff. So repeat business and growing deal size isn't the challenge; the challenge is getting new people to try us for the first time."

The company said it ran more than 100 campaigns in 2011, helping to triple revenue from 2010. Buzzfeed won't say what the 2010 revenue was, though it was almost certainly less than $10 million. Jon Steinberg, the company's president, said Buzzfeed hopes to triple revenue again this year.

Buzzfeed still has its work cut out. The company has yet to break into big categories of advertisers, such as auto brands, in any meaningful way. But it has created solid early traction, especially with media and entertainment brands. BBC America worked with Buzzfeed to promote the TV show "Dr. Who." For one campaign, Buzzfeed posted a photo list of Dr. Who-themed crochet characters. The post was shared to Facebook 4,000 times.

"The sponsored posts that they customized for us feel so organic to the site," said Matt Stein, VP-promotion, marketing and creative services at BBC America. "They don't feel like advertisements."

Of course, sponsored posts aren't exactly new. But Buzzfeed has managed to wrap the concept in social sheen, sprinkle in its pop culture-focused voice, and optimize distribution better than most.

As Buzzfeed moves, the tides are turning with it. Twitter is focused on advertising that appears in the same form as its existing tweets and trends. And Facebook puts more emphasis by the day on its Sponsored Stories business.

In an interview with Ad Age at the company's Manhattan office last month, the conversation shifted toward Facebook's increased focus on sponsored posts -- ads that are native to the Facebook experience.

"In a sense, I think we're already there," Mr. Steinberg said.

So you've beaten Facebook to a true, social-advertising experience?

"I do think we've beaten Facebook to it," he said. "We're fully native with our story advertising."

Before Mr. Steinberg could continue, Mr. Peretti stepped in.

Mr. Steinberg was not suggesting that Buzzfeed was the next Facebook, only that perhaps Facebook could learn a thing or two from Buzzfeed's ad business. But Mr. Peretti tapped his foot on the brake a mile ahead of the speed trap. The business potential is still just that : potential, he seemed to be saying.

Then, having made his point, he accelerated. "It's an exciting time," Mr. Peretti said. "It feels like a shift is happening and we're in a good position to help lead it."