Plus TV's First Chat About Agency Compensation Models
READ THIS NEXT
The 'Mad Men' Prop Auction: 5 Items You Need At Your Agency

There's a kind of dark beauty in Matthew Weiner's decision to have his son to announce the grandest and bleakest theme in "Mad Men," the one that transcends the vicissitudes of business and cultural history and encapsulates the restlessness that is at the root of our makeup, the real human element. 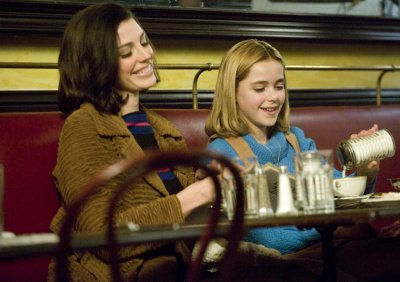 This is teenage Glen Bishop, played by Marten Holden Weiner, speaking to 40-year-old Don Draper, summing up the show's attitude toward ambition and progress. Glen's glum pronouncement follows his abstractly disappointing rendezvous in the city with Sally Draper, who pulls a runner from their museum date after making her own natural history. The all-is -disillusionment analysis is not a new sentiment on the show, but it is a central one. In dozens of ways, through dissatisfactions both large and petty, the series has shown us how there is no such thing as a contentment or a fulfillment that desire won't eventually undo if you just give it a moment.

What's interesting is how "Mad Men," as a show about business, refuses to bluntly dramatize this psychological insight into rapacious greed, as so many other explorations of American capitalism, from "Wall Street " to "There Will Be Blood," have done. In Sterling Cooper Draper Pryce, we're not dealing with masters of the universe but with a second-tier ad agency. Hunger in this context is about getting employees Christmas bonuses, yes, and it's about keeping some sort of fire alive and not being content to deal with "piddly shit."

The most compelling story arc this season is Don's rekindling of that fire, finding some midcareer meaning. Sure, he talks a ton of bullshit and there's no indication whatsoever that he has any idea how to build a brand in 1967's cultural milieu. But after an intense period of couch-napping he's back in the game; he'll have none of the nihilism that Glen suggests and Lane executes on when he strings himself up to his office door. Rather than use dissatisfaction as an excuse for despondence, Don lets it animate his work. The result isn't necessarily pretty -- in fact it's more angry than anything else -- but most importantly it shows he's still alive. Maybe more than anything else "Mad Men" is about resisting the clutch of that invisible hand that wants to throw you into the dustbin of history.

Don's pitch to a roomful of Dow Chemical executives, so tonally aggressive it's almost violent, is an inversion of Alec Baldwin's turn in the film version of "Glengarry Glen Ross," and in ways more powerful and muscular. Rather than pick on weak subordinates, he's going after prospective clients, barking at these Dow men who owe him nothing, willing them into change, challenging their complacency regardless of whether the complacency actually exists. Compared to the season-one pitch to Kodak, so warm and fuzzy, this is discordant and disruptive. He shrugs off their insistences that they're happy with their agency and market share, telling them, "Even though success is a reality, the effects are temporary. You get hungry after you've just eaten." And: "What is happiness? Happiness is that moment before you need more happiness."

We don't yet know whether this tack will work, but there seems to be some flicker of recognition, especially when Don proposes a made-in-America positioning for Napalm, the incendiary compound that caused so much carnage in Vietnam. ''The important thing is when our boys are fighting and they need it, when America needs it, Dow makes it and it works." This, of course, misses the point about Dow and Napalm, but Don is not about nuance right now. 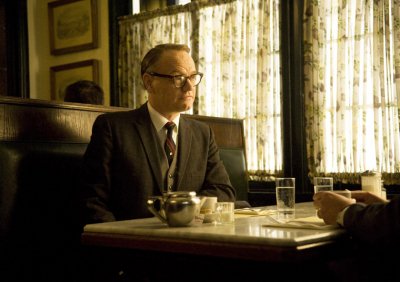 There are victims of course, and not just the innocent Vietnamese combusted by the military-industrial complex. RIP Lane, our likeable, bean-counting Brit weenie. His fall was fast and then somehow slow, his demise unfolding throughout the episode in horrifying slow motion. First, the irony of a 4A's chairmanship and the humiliation when Don finds out about his embezzlement. Lane puts up a pathetic little fight and then begs. Rather than forgive, Don treats Lane to aphorisms -- "The next thing will be better because it always is " -- and forces his resignation.

Next is the awful moment when Rebecca Pryce surprises her husband with a racing-green Jaguar, bought with money they don't have. Then his attempt to off himself in the Jaguar, elsewhere described as "an expensive, unreliable Dodge," fails when the car won't turn over. I felt something break in me when he snapped his glasses in half.

Lane is denied a quick exit and it's all quite terrible to watch, but somehow not quite as disturbing as watching Sally Draper get her first period, which yielded the one frame of "Mad Men" that has caused me to drop my iPad. Couldn't we have left her womanly flowering at her successfully ordering coffee in a restaurant? In any event, it was good to get some more Betty Francis, even if only in her role as bitchy relief, telling Megan, "I think she just needed her mother."

Finally, we can't let the partners' chat about agency compensation models go unmentioned, as it's probably the first such discussion ever to be televised. It seems that Jaguar has requested that instead of paying 15% of media spend to the agency, it actually pay for the work that gets done. It's this request that gets Bert Cooper looking into the books only to find the forged bonus check. But Lane Pryce, of course, isn't the only thing to become unraveled by the shift of the compensation systems to the fee structure over the next few decades. That change, which heralded the end of fat, easy profit margins, is widely blamed for making the agency business the very difficult one it is today.

*******
Dow was dealing with the PR fallout from its production of Vietnam-era horrors well into the mid-1980s, when this ad appeared.