See a Real Heinz-DDB Presentation From 1968
READ THIS NEXT
The 'Mad Men' Prop Auction: 5 Items You Need At Your Agency

Last season, the persistent ad-agency-as-brothel metaphor on "Mad Men" ditched its figurative quality and became literal when a central and beloved character was pimped out in exchange for a big new account. But the selling of Joan Harris to a beastly Jaguar client wasn't the end of that nasty meme. 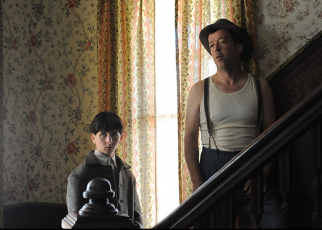 Last night's script threaded scenes from the rather rough Depression-era childhood of Dick Whitman into the late 1960s goings-on at Don Draper's ad agency. The parallels are not subtly drawn. We see Dick and his pregnant mother arrive at a brothel run by her brother-in-law, who declares himself the "rooster" of the house. Sad, young Dick, with his electrified Lloyd Christmas haircut, is told by mom to "Keep your eyes down and mind your own business here." It hits bottom when we receive the news that Don, as a boy, peeped his pregnant mother getting defiled by his brothel-tending uncle.

We flash forward in time to see the return of Herb Rennet, the Jaguar dealer client, whose cringe-worthy banter sends Joan to the bottle. Rennet keeps his eyes up, asking to be "shown the sights" at Sterling Cooper Draper Pryce -- a "kid in a candy store." Corpulent, lascivious, none-too-bright ole Herb isn't the only john around. After another adulterous romp with downstairs neighbor Sylvia Rosen, Don slips her a few bucks. The payment isn't for services rendered, but it's still skeevy, especially given Don's background.

Last night's episode, like many others, was all about betrayals. There are the morally unambiguous ones: Don's continuing affair with Sylvia while wife Megan deals with the aftermath of a miscarriage and Pete Campbell's disastrous targeting of a neighbor woman. Then there was Peggy's accidental betrayal of her old friends at SCDP, when she tells new boss Ted Chaough a little too much about some insider baseball at her old shop. All told, they offered an examination of the characters' warped senses of loyalty, played out against the backdrop of a mini-drama at Heinz.

SCDP, we know, has been working some magic for Heinz's vinegars, sauces and baked beans division for some time. Now its ketchup division, led by a polished young client, wants to take a look under the agency's hood. The beans client goes through the motions, but forbids the agency to present any ideas. Despite missing out an opportunity for more revenue, Don is OK with this, just as a few seasons ago he wanted to keep Mohawk Air rather than pitch the much bigger American Airlines. "He brought his business here when we were barely standing," Don says of Raymond, the beans client who's feeling insecure about the up-and-coming ketchup brand baron. "Sometimes you gotta dance with the one that brung you."

Considering the source, this bit of folksy wisdom is a real laugher. But Don is not alone in misplaced loyalties. Pete Campbell, in the other client-oriented subplot, is eager to carry out Herb Rennet's request to redirect a big portion of the forthcoming Jaguar brand campaign to direct-response radio ads.

Rennet wants SCDP to pitch the recommendation as its own to Jaguar corporate. Pete is all for it. Don isn't, and so he sandbags his own pitch in a brilliant bit of Draper derring-do.

What's abundantly clear in all this is that the men have workplace loyalties they never extend to their wives. For all his stand-by-your-man crap, Don's affair with Sylvia is getting deeper and ickier, while Pete's one-time thing with Brenda at his pied-a-terre ends in tragedy. She turns up with her face bloodied on the Campbells' doorstep, setting in motion some ugly events.

When we first meet the Campbells this episode, they're both flirty with others, perhaps emboldened a bit by the opening of "Hair" and the growing free love culture. But after catching Pete, Trudy tosses him out. We learn in the process that Trudy, who's so easy to underestimate, has always known about his philandering. 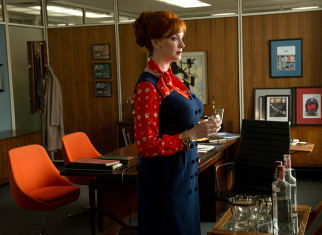 If you want your lead characters at all likeable, it was a grim episode, suggesting a world in general decline. The radio and TV hums with news of the Tet Offensive and the capture of the USS Pueblo, an intelligence gathering ship that was taken (and is still held as a museum) by North Korea. Even "The Tonight Show" is interrupted with bad news from Vietnam. "Two little piss-ant countries are handing our hat to us," said Dr. Rosen, a 1968 line that could have worked in the aughts.

Where shall we look for a moral center in all this? Perhaps across town to Cutler, Gleason and Chaough. Ted Chaough has appeared throughout the seasons, usually turning up to pester Don in smarmy way. He's snagged various of SCDP's old accounts and, of course, the services of Peggy Olson. But there's something about Chaough this season.

Increasingly, he is taking shape as a Draper foil, illuminating everything Don is not. In the season premiere, with his agency is crisis mode, Ted is unreachable and not because he's having some sort of fling. He's on a retreat with his wife, working on their marriage. "Turns out I work too much," he tells Peggy, right before suggesting she think about some sort of work-life balance and cut some slack to her put-upon creative department. And, yet, when it comes to business, he's cutthroat, urging Peggy to put her SCDP loyalties behind her and go after the Heinz ketchup account. It's Chaough being suitably aggressive while Peggy is suitably anxious. But never is it unethical or revolting.

Sort of depressing and full of unattractive dorks, Cutler, Gleason and Chaough would never be confused with the best little ad agency in New York. But neither would you call it the best little whorehouse. And that does mean something.

If the Heinz ketchup of "Mad Men" was kinda sorta interested in hearing from agencies other than DDB, the real Heinz seemed pretty happy in 1968, if an old 4A's presentation is any indication. The folks at WARC were kind enough to make available from their premium vault a document that shows what was on the mind of the then 88-year-old ketchup brand.

Ken Cosgrove might have called it "Coca-Cola of condiments" but the mid-1960s were a tough time for Heinz Tomato Ketchup. In the presentation, called "The Big Idea -- Heinz Ketchup: A Winning Loser," we learn that DDB was brought in in 1964 to respond to a business slide.

The brand had been losing market share since 1962 and overall business was down, even though Heinz was "number one among three brands that accounted for over 70% of the market." To add complications, the marketing efforts of competitors were picking up.

First the team addressed some pricing issues. Then they turned to packaging, introducing a 26-oz household size and then a smaller wide-mouthed bottle. (Going unmentioned is Heinz's 1968 packaging coup: the introduction of those little foil packets.) Heinz and DDB also changed up the media mix, dropping magazines to focus on daytime network and spot TV. And of course the creative approach changed.

Since 1964 Heinz had focused on the thickness and richness of taste, but DDB took the whole thick thing to the next level. A TV ad put a few ketchup brands side-by-side and poured them on to a napkin. Heinz, naturally, didn't run. "Everybody talks about being fast. It's the same kind of thing as the Volkswagen ad that talked about 'think small' instead of think big. Here is a product that is telling you slow is an advantageous thing."

I'll leave you with a bit of the presentation that's remarkable in the context of last night's episode. From the document, it's a bit unclear who is doing the speaking here, but it appears to be Bert Steinhauser, a famous DDB art director. His words are Draper-worthy.

In advertising there is a great deal of fun and games and what I call the guessing game. I hate to sweat our Nielsens. I'd much rather really sell. I am very thankful that I received a gold medal many years ago and got it out of my system. I find that selling is a good word and it is a strong word and it is a creative word. I think selling is part of living. The mere fact that we are born means we have to sell. We have to sell ourselves in terms of what we do. That's what life's all about.