Elle Decor Is No. 8 on Ad Age's Magazine A-List

Interior-Design Title Clears High Hurdles, Sets Sights on Top Spot in Race of 'Survival of the Chic-est'
READ THIS NEXT
How restaurant chains are duking it out to be the best in their categories

NEW YORK (AdAge.com) -- Given the events of the last year, you'd think that the folks at Elle Decor would be telling a different story nowadays. 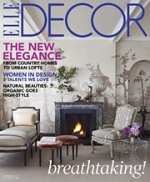 It's a testament to everyone at Elle Decor that the magazine has been thriving amid the upheaval.

Its issues from January through September of this year ran 25% more ad pages than the issues over the same period last year, according to the Media Industry Newsletter. Granted, 2009 was few magazines' finest year, but this year's A-List honors several good comeback stories. And at 175 ad pages, the October issue is Elle Decor's largest since October 2007, the year so many magazines wish they could see again.

Despite increasing the cover price to $5.99, moreover, single-copy sales increased 8.3% during the first half of 2010; the June and July/August issues both sold in excess of 90,000 copies on newsstands. Along the way, Elle Decor created a raft of marketer-friendly programs -- like its first show house, which opens next month in San Francisco. The program lured 30 sponsors and more than $2 million in revenue as of late September. At the same time, it continued to make high home style feel within readers' reach. "It gives them something to aspire to, but it's not so aspirational that it's not achievable," Ms. Friedmann said.