Chrysler Group Is Ad Age's Marketer of the Year

Dressed in blue jeans, boots and a blazer, Olivier Francois nursed a cup of espresso in his office at Chrysler's headquarters in Auburn Hills, Mich., and recalled his first trip to Detroit.

It was Oct. 24, 2009, and Sergio Marchionne, Fiat chairman and chairman-CEO of Chrysler Group, had requested the visit. At the time, Mr. Francois had no idea he was being offered the chance to move from president-CEO of Fiat's Lancia brand to head of marketing of Chrysler -- and eventually all of Fiat.

It was Mr. Francois' 47th birthday, and instead of celebrating with his children in Europe, he was stuck in a hotel room watching TV. Mr. Francois can't  recall the programs but he remembers the numerous commercials: for vinyl replacement windows, "one-day only" sales events and the car commercials that used terms he'd never heard before, like zero down, rust inhibitors and cup holders. And then there were the deals. "It seemed like America would buy anything that ended in 99," he said. 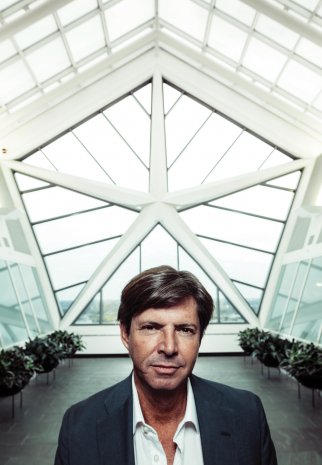 But through the clutter and the rain falling outside, he saw a city that impressed him with its spirit and attitude. Mr. Francois said his "fresh set of eyes" allowed him to see that "America had a story to tell that was bigger than any cup holder, bigger than any Columbus Day sales event."

This was the earliest seed of Chrysler's now-iconic messaging that draws parallels between the comeback of a gritty, tough city and the once-troubled automaker.

And what a comeback Chrysler has seen. Chrysler Group held 8.9% market share when Mr. Francois took over marketing; it's now at 11.5%. Unit-sales growth rose to 37% in December last year from -4% in December 2009, according to Automotive News figures. Chrysler's brand-loyalty rate -- the number of Chrysler owners who purchased another Chrysler vehicle -- doubled from 15% in the third quarter of 2009 to 30% in the second quarter of 2012, according to automotive researcher Polk.

Prints of the Chrysler campaign, including Mr. Francois' signature "Imported from Detroit," hang in his rather barren office; the Paris-born executive, uneasy about his command of the English language, said he prefers that his work speak for him. Watching his commercials play on the supersize computer monitor, he conveys the kind of pride a father has for a child. These ads are, after all, his babies.

He is most proud of his first Jeep Grand Cherokee commercial, "The Things We Make, Make Us," which started it all. He said the "Born of Fire" ad featuring Eminem that aired during the 2011 Super Bowl and "Halftime in America" for the 2012 Super Bowl provided continuity, communicating the theme of the pride of being an American and of being part of a new Chrysler. Answering interview questions while checking his two BlackBerrys, Mr. Francois explains his belief that telling that compelling story is what made the ads successful. Consumers, he said, are far more likely to be engaged by a good story than by a catalog of information or a list of features. Even so, he feels strongly that there is "zero contradiction between good storytelling and proudly speaking about the product."

But Chrysler's story is more about marketing than product. While the automaker has steadily been improving quality and getting closer to industry benchmarks, its vehicles are in truth quite average. "When they were bought by Fiat, Chrysler had a lot of holes to fill in their product line -- mostly because of uncompetitive product," said Jonathan Linkov, senior editor-autos for Consumer Reports. "Many still exist, but they're doing a decent job of addressing them, however slowly." The heavy lifting, however, is coming from marketing. Chrysler's turnaround is "as much, if not more, about image than it is about [Chrysler] being a really "necessary' product," Mr. Linkov said.

Mr. Marchionne's decision to have a European shepherd an iconic Detroit brand was initially met with skepticism. But now, it's difficult to find a marketing analyst who doesn't gush over Mr. Francois' work.

"He did a wonderful job of telling better stories, bigger stories and more powerful stories that resonated with America in a very important way, changing the trajectory of how people conversed about the brand," said Steve Wilhite, a former Volkswagen marketing executive who is now a management consultant in Delmar, Calif. Mr. Wilhite credits "Born of Fire" with identifying Detroit as a proud and good place, not a sad and terrible place, therefore helping renew the public's faith in Chrysler.

The data tell a compelling story, according to Jeremy Anwyl, VP of Edmunds.com. Chrysler's "Born of Fire" ad boosted the brand's consideration 87% in the week after it aired. In February 2011, sales of the Chrysler 200 featured in the ad jumped 25% from the previous year. Visits to the vehicle's web page in February were up more than fourfold over the previous month.

Mr. Anwyl said if the Chrysler 200 ad were analyzed by traditional measures, it would be faulted for not emphasizing the car it advertised. Yet the spot was "magic" and "knocked it out of the ballpark," he said.

Sean Fitzpatrick, a former creative director at Campbell Ewald who did many ads for Chevrolet and who now teaches advertising at the College of William and Mary, uses this ad in his classroom as a model for effective advertising. "It took great courage to tell the truth about what Detroit has gone through and to talk about the fact that when you go through a tough time, that 's when your character is formed," he said. Acknowledging that Chrysler had further to climb than its domestic competitors, he said the company's ads are "hot sauce" while competitor General Motors' have a "strong taste of vanilla."

But there are those who believe Chrysler Group marketing has a ways to go in wooing consumers to the brand. Lincoln Merrihew, VP-transportation for Compete, which measures shopper behavior, said that in early 2006, some 9% of shoppers looked for a Dodge. That's now down to 7.4%. Though Chrysler, at 2.9% in 2010, saw a lift to 3.3% in May 2011 following its Super Bowl ad, that number has since settled to 3.2%.

And not all of Mr. Francois' ads were so well-received. His commercials for the Fiat 500 featuring Jennifer Lopez and for the Abarth with Charlie Sheen were far more controversial. The Jennifer Lopez ad "was outright horrible," lacking emotional connectivity between the brand and the audience, said Mr. Wilhite. Jody DeVere, CEO of AskPatty.com, which tracks female responses to marketing, said both ads were "pandering and sexist." Chris Travell, VP-strategic consulting for the Automotive Research Group of Maritz Research, said the ads haven't generated the targeted sales volume Chrysler sought, and "the effective marketing of the Fiat brand in the U.S. going forward would certainly be one of the challenges Chrysler faces."

The criticism is a sensitive issue for Mr. Francois. "My objective is not to be judged by some angry journalists but to deliver sales," he said. The executive argues that it was essential to create provocative ads as the brand he reintroduced to the U.S. He's also pleased at the way he was able to leverage a smaller advertising budget. Ms. Lopez brought the Fiat 500 on the stage of the American Music Awards, where it was seen by 120 million viewers. It was also featured in Carly Rae Jepsen's video "Call Me Maybe," which has received 120 million views on YouTube, targeting "the perfect audience: teenagers who are starting to drive," he said.

The results, Mr. Francois said, have been good. Fiat's North American sales have jumped to 47,000 this year, from 21,000 last year, in line with the company's goal to deliver 50,000 units in the region. For October, Fiat had the highest percent change in sales of any automaker over the previous year, according to Automotive News, though it is off a small base.

The ads brought more Fiat buyers into Holt Fiat, a Hurst, Texas, dealer. Kyle King, the dealership's fixed-operations manager, has heard customers discussing the commercials and noted that the dealership sold 12 more units the month after the Jennifer Lopez ad aired. The ads "get your attention and are generating buzz," he said.

Of course, the response from the pivotal "Born of Fire" was a lot bigger. Richard Summers, general manager of Lithia Chrysler, Jeep, Dodge of Medford, Ore., said his dealership was fighting "to keep our head above water" before the ad aired. Following its release, "it was crazy the response we were getting," he said. The dealership tripled its sales of the Chrysler 200, which had been sluggish.

Executives at Chrysler's ad agencies describe Mr. Francois as an unpretentious, fast-thinking, hands-on manager who is relentlessly optimistic and enthusiastic about nearly every idea. Stan Richards, principal of The Richards Group, which handles Dodge Ram and developed the Fiat "Seduction" ad, said Mr. Olivier brings "fire" to the task of creating advertising and does not overly rely on research and testing. "The result is we put outstanding work on the table in front of him," Mr. Richards said. "He invariably picks the right work and gets very involved in producing it."

David DeMuth, co-CEO and president of Doner, the agency that handles retail marketing for Chrysler and also developed the Jennifer Lopez and Charlie Sheen Fiat ads, said Mr. Francois is the least risk-averse client he's worked with. Many in marketing "view it as their job to tell you what's wrong with an idea," but Mr. Olivier "looks to find what's right with an idea," Mr. DeMuth said.

John Jay , global executive creative director of Wieden & Kennedy, which produced "Born of Fire," "Halftime in America" and "The Things We Make, Make Us," said that to Mr. Francois, nothing is impossible. His agency wanted Eminem's music. Mr. Francois not only got the rights to it, he secured Eminem as well. Mr. Jay was skeptical that Clint Eastwood would agree to the commercial, but Mr. Francois also lined him up. Once Mr. Francois is convinced of the idea, "he goes out to help magic [make] happen," Mr. Jay said.

Mr. Francois sees himself as the coach and team leader. Drawing a parallel to cooking, he asks that his creative agencies bring him the raw ingredients, not the finished dish. He gives his agencies a "spark, the beginning of an idea that could lead somewhere." For example, in a recent meeting with The Richards Group, a print of a woman with a scorpion on her back piqued everyone's interest. Soon, they started building a story around it. That was so inspiring, Mr. Francois said, it could become the basis of a follow-up to the Fiat "Seduction" ad.

Mr. Francois' challenge will be to continue the momentum. He says he's reviewing options for 2013's Super Bowl ad, revealing only that the final campaign will be truthful to the message and nature of the brand and "not just a device." Mr. Francois seems eager to keep up the work, saying that Chrysler has been "successful at starting a conversation. And conversation is paramount."