There's a natural link between the worlds of fashion and music, but perhaps no designer is as rock-and-roll as John Varvatos. He's had his own SiriusXM radio show. His flagship store in New York stands on musical holy ground, occupying the space that for decades was home to the legendary club CBGB. And his ad campaigns for years have eschewed the beautiful, romantic imagery you'd normally see in the pages of a fashion magazine -- instead featuring rockers like Iggy Pop, Velvet Revolver and Alice Cooper.

If you ask Mr. Varvatos what his personal influences are, he won't name-drop fellow famous designers. He'll say Jimi Hendrix and Nirvana, Led Zeppelin or maybe even Dave Brubeck. Given music has been his biggest source of inspiration in building his eponymous -- and world famous -- retail brand, we chatted with Mr. Varvatos about the spark that started it all.

Ad Age: You come from a Greek background and grew up in Detroit -- known for Motown more than rock. So what sparked your obsession with rock at a young age?

John Varvatos: Detroit does have a lot of rock-and-roll roots for sure. And blues and Motown. But I grew up in a little house that was 800 square feet with seven people and one little bathroom. I loved music from a young age, and my way to get away from my family was to put headphones on and go in the basement. It transported me, in such tight quarters, away to a totally different place. The passion for the music really came when I spent all my breathing hours trying to get away from my family.

Ad Age: What's your most vivid and earliest music-related memory?

Mr. Varvatos: I remember watching "The Ed Sullivan Show," and watching the Beatles and the Doors. The whole look and sound of them was amazing. That was when I was about 6 years old. But they were always a little sweet for me. When I was younger, I liked the bad boy side of it all more than the prim and proper side of it -- I preferred the Rolling Stones.

There was a record store in my neighborhood called Sam's Jams. When I was about 12 years old, I would go there and bother the owner, Sam. I would sit on the floor of the record store and read every inch of Cream magazine and spend the three or four dollars from my paper route on buying music.

The next level for me was stylistic, and the thing I loved about artists like Jimi Hendrix and The Who. I started taking bits and pieces from how they dressed -- never wanting to look like them -- but wanting to create my own style. In junior high school, I noticed that when I dressed a certain way, girls got into it. As a kid it's a big thing having girls be attracted to you. So I got a job when I was 15, working at men's store, and that's when I started making money to buy clothes. That became the next obsession, I became obsessed with fashion but music was still a big part of my life. 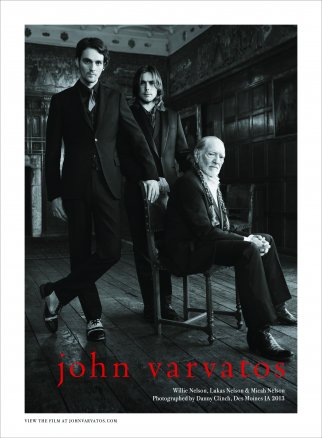 When I went to concerts I'd take pictures at shows, and on campus at college with people. I always was intrigued by and noticed people's style -- whether it was their hair or their sunglasses or their boots. I had no idea this is where it would go, because I didn't go to school as a designer. (Mr. Varvatos' college degree is in eductation). I moved to New York and was head of sales for Ralph Lauren, and once I was working in that environment I knew I wanted to be in design and went back to school. When I finally set out to do my own thing, it wasn't thoughtful that I'd mix music into it, it was organic.

Ad Age: Your best-known ad campaigns, which have featured the likes of Alice Cooper and Iggy Pop, are cut from a different cloth than your typical fashion spread in a magazine. How did you decide that was the right avenue for you?

Mr. Varvatos: For the first five years of our brand, we did beautiful romantic advertising. When I was looking at advertising in magazines, I remember flipping through a Vanity Fair or a Vogue and there were a lot of beautiful advertisements. I never talked publicly about the music much as an inspiration for the company but around 2005 I had been working with Stephen Niedzwiecki, the founder of [New York creative agency] Yard, and he came in to talk about our next ad campaign. And I remember I told him I didn't want to do that beautiful stuff anymore … I want to bring music into it and there's an authentic connection to our brand. We put our heads together to figure out what that could be and how it could be something that would be lasting. I said: 'I'm not looking to use musicians just one time -- I want to use artists that transcend every generation, have staying power, and not just the flavor of the moment.' And that's how it evolved into this iconic music campaign that's now in it's 19th edition and ninth year.

Ad Age: What was the most memorable ad-campaign shoot with a musician or band and why?

Mr. Varvatos: We had so much fun with everyone, and got so many iconic pictures. We are blessed with every single campaign we shot -- from Iggy Pop to Alice Cooper to Green Day to Jimmy Page and Gary Clark Jr. There isn't one that wasn't special or emorable. It's sort of like, 'Tell me about your favorite children' with these campaigns; we sincerely love every one in its own way. Part of it is the relationship with the artists we have that makes it so special and the laughs and stories.

Having the same team [to shoot the campaigns] is very important. We all push each other and push each other's buttons. And when we're done with the shoot the artists thank us. It's something to be proud of to have a team like that where artists are stimulated and inspired by what we're doing and we all leave every single shoot saying can you believe that actually happened? I pinch myself every single time that I get to do this and this is part of my job. Growing up in Detroit as a kid never did I think I'd have any real connection to the music industry and that these artists could be people I would know and actually become friends.

Ad Age: You have always had philanthropic efforts around music tied to your brand. When did you know that you wanted to advocate publicly for certain causes in association with the John Varvatos name?

Mr. Varvatos: From the day we started the company. I was always involved in philanthropic things in my personal life. We all have a pretty good life in our company, a great place to work, and a good energy. And it's nice to be able to give back. We started off with VH1 Saves the Music foundation, and supported the music programs in New York City schools. Then we did road recovery with artists who had drug problems. And then we used the connections to do big events, like our annual Stuart House benefit where we have artists come and play to come and raise money.

Ad Age: Recently you did an event with Questlove around the release of the new McIntosh MT5 Precision Turntable. You talked about the resurgence in vinyl, which I think is really interesting. Why do you think -- in the digital era -- that people are flocking to vinyl?

Mr. Varvatos: Part of it is a sound thing … it's just warmer. In general it does sound better than a CD, or for sure digital. With a CD you also flip through so quickly and there's this great thing with listening to a whole side of an album the way it was meant to be created and I think young people are rediscovering that experience. It's mostly driven by young people who are sitting with an album cover and reading it inside out and know about the artist and the engineers. It's the experience of sharing it with friends, too. It's also, to a small degree, faddy. But mostly something younger people never experienced.

Ad Age: How has your connection to music helped your brand?

Mr. Varvatos: Probably in a good and bad way. It's been such a powerful thing -- the good part being that without the intention of saying we own rock-and-roll, the industry has said we are, and consumers regard us that way too. It's great because it's globally given us a hallmark for the brand and a unique face out in marketing the brand. If there's a negative at all, it's that people just want to talk about who we are shooting next, and pigeonhole you that all you do is rock-and-roll.

Ad Age: Tell me about music as it relates to the in-store experience. How does it enhance a shopper's path to purchase and the feeling they have while they are browsing items in a store?

Mr. Varvatos: There's a lot about our store that's music-oriented. There's iconic rock photography. And we have an audible music experience, with music always playing. After that, it's about what you want to make of it. It can either stimulate you and excite you. It can turn you off. Or it can put you to sleep. The elevator music of some stores can put you to sleep and if the customer and the volume levels of the music don't match it can put them off. But it can be a turn-on and a stimulus. You have to do what's right for your brand and who you think your consumer is and who you know your consumer is. And it has to be real.

The reason all of it works for us is because it's real. It's not fakey -- I'm not a designer that wants to connect himself with music, it's a passion. It's the reason all these artists want to be connected to us too and do these campagians for a nominal fee because they want to be a part of it. And consumers know quickly if it's real or not. When you think about retail, for some people music is not good for their brand. Not everyone wants to come into a store and have a musical experience.