This small agency took a big chance, failed—and was the better for it: Living on the Edge | Ad Age
Skip to main content
Sign In Register

How OH Partners took a leap with Airbnb
READ THIS NEXT
6 takeaways from Ad Age’s Small Agency Conference
Credit: iStock

Living on the Edge is a weekly series exploring how small agencies have overcome adversity and applied creativity, ingenuity and hard work to solve a business problem. This installment is about how one shop took a big chance in a bid for new business and lost—and what it learned from that.

When my business partner and I, Matt Owens, opened up OH Partners back in 2008, we knew that one day we wanted to become a national advertising agency—one of the big guys. The stark line between being a local or regional agency and "one of those guys" isn’t talked about very often, but anyone in the industry will tell you that it’s very real. And what’s talked about even less is how hard it is to make the leap from one side to the other.

People say it takes guts, extreme creativity and the best minds in the business to climb your way to the top, and I thought that OH Partners had all of those things, which is why I couldn’t understand why we were still coming in second for pitches and awards. It wasn’t until [Airbnb Chief Marketing Officer at the time] Jonathan Mildenhall announced in 2017 that Airbnb was looking for a new creative agency that I realized that all we needed to cross the finish line was our big moment; and this was it.

I got my team together and we started to think about how we could get one of the most well-respected and universally adored CMOs in the world to notice us. We knew we would have to pull out all the stops, so we did. We converted our office into an Airbnb listing, hosted a 24-hour livestream with dozens of guests and generated non-stop social content. After only 17 hours, it happened: Jonathan Mildenhall called me and said he loved what we were doing and wanted to talk about some upcoming work.

It was a dream come true… until it wasn’t.

To make a long story short: Jonathan left Airbnb later that year, and with that, so did all of our talks about upcoming projects. It was, to say the least, disappointing to have come so far just to be stopped in the homestretch. However, when I look back and ask myself if it was worth it to spend thousands of dollars to put ourselves out there for a one-in-a-million chance, I say “Hell, yeah.”

Even though I felt pretty defeated after things fell through, our stunt (and its success) completely changed the trajectory of our agency in a way that nothing else could have.

We aggressively started pursuing national accounts. We stopped apologizing for being a “regional agency” in pitches. In fact, we didn’t even mention it. We just showed them what we could do, and in the three years since we pulled that Airbnb stunt, our business has grown by more than 400 percent, and we’ve added dozens of national accounts.

What I learned is that advertising is a game won with confidence. If people don’t give you the shot, you have to take it yourself. The whole experience of keeping our eye on a prize that we thought was out of reach, winning it—and, of course, later losing it—shifted my mindset from thinking we could do big things to knowing we could, and right in front of my eyes, the agency broke free of doubt.

And now? We’re well on our way to crossing the great divide and becoming one of the big guys.

Do you have a story to tell about how your small shop overcame adversity and came out stronger? Click here to learn more about out new series and watch for details for our upcoming Small Agency Conference & Awards. 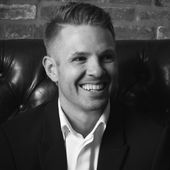 Scott Harkey is co-founder and managing partner at OH Partners in Phoenix.

Alto uses creativity to help solve the challenges of the world

For Giant Spoon’s 'Halo the Series' campaign, the sky was no limit