How Social TV Is Changing the Field for Sports

All kinds of media companies are trying to crack the social TV code -- and those that produce live sports are no exception.

Sports fans' deep engagement and tendency to sports talk ought to be a perfect fit for social media, executives from ESPN, Major League Baseball and WWE said at Ad Age 's Social Engagement/Social TV conference on Wednesday. "Sports tends to be perfect for this," said Bob Bowman, CEO of MLB Advanced Media. 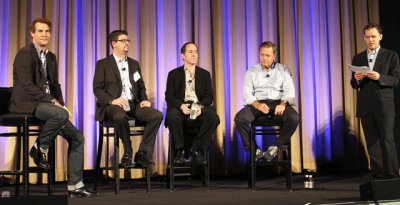 The opportunity for fans to dictate their own conversations is compelling, Mr. Bowman added. "They haven't been told what to say yet," he said. "They haven't heard from experts on TV. What they tweet is their original thoughts."

The traditional TV platform will persist at least as well in sports as in any other genre, Mr. Bowman suggested. "People will always watch sports on the largest screen they can find," he said. The second screen is just complementing viewers' traditional experience.

"In baseball, both TV viewing and online viewing move together," he said. As Texas Rangers outfielder Josh Hamilton hit two, then three and ultimately four home runs in one game on Tuesday night, fans' chatter in social media drew in more viewers. "As a player hits that third home run, fans are all over the place, chatting about it. I think it's complimentary. As soon as something is happening, fans want to get to as many people as can."

Social engagement isn't limited to the main event or even TV for sports, either, panelists said.

WWE has used live pre-shows on YouTube to generate social buzz. Last week it tested in-person social engagement at an event in Hunstville, Ala., encouraging fans to share photos and vote on the type of match at the top of the card. "Twenty-five percent of the crowd voted," said Jason Hoch, senior VP of digital at WWE.

"These are incredible content experiences," Mr. Hoch added. "It was a two-way street with fans, getting them involved."

Initiatives that reach fans on a large scale and across platforms will ultimately prove the most attractive to brands, especially if they are still unsure how exactly the second screen factors in, said John Kosner, exec VP for digital and print at ESPN.

"It's the excellence of the experience that ultimately matters, and it's important to note that advertisers really value integrated scale," Mr. Kosner said. "Ideas and experiences that don't have scale are unlikely to connect."