Since no one enjoys going to work the day after the Super Bowl, Heinz wants to make it a national holiday.

Kraft Heinz Co., which makes Heinz ketchup, mustard and other game-time condiments, is putting its money where its mouth is with the effort. Thousands of U.S.-based Kraft Heinz salaried employees get the day off this year, Monday, Feb. 6.

Of course, Heinz marketers aren't the first people to suggest a day off the day after the big game. But they're probably the first ones to dub it "Smunday" and commission a two-plus-minute video promoting a petition.

It's no secret that many people would like the day after the Super Bowl to be a holiday. Some suggest the Super Bowl be moved to Presidents' Day weekend, pretty much guaranteeing that lots of Americans would already have "Smunday" off. Nicole Kulwicki, head of brand build for Heinz brands, said the brand hopes to amplify the ideas plenty of people have had for years.

"It's really all about how the Monday after the big game is one of the worst days of the year," Ms. Kulwicki said. "Nobody wants to go back to work." 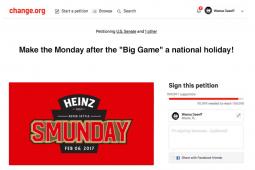 Starting Wednesday, Heinz is promoting its Smunday petition with its own URL, Smunday.org, which directs people to a Change.org petition page. Heinz hopes to get 100,000 signatures, which Ms. Kulwicki said should be enough to send it to Congress for consideration.

Last year, Heinz was back in the Super Bowl with its "Wiener Stampede" spot. This year, Heinz is eschewing another commercial and focusing on promoting its Smunday petition. Meanwhile Devour, a frozen-meals brand from Kraft Heinz targeted at hungry guys, held auditions for a commercial featuring a newcomer that it plans to air during the game, but on a different network.

Ms. Kulwicki said the Smunday idea was in the works before the Steelers, the NFL team that plays at Heinz Field, made it into the playoffs. The Steelers lost to the New England Patriots on Sunday, so they won't be in this year's Super Bowl.