NEW YORK (AdAge.com) -- The advertising roster for the Super Bowl is fast becoming a game of musical chairs.

While Fox has still sold all of its inventory for Super Bowl XLV this Sunday, some players and positions are changing quickly. Groupon has managed to cadge a spot after another advertiser that Fox declined to name gave up some time. Pizza Hut, backtracking after an announcement that it would advertise in the Super Bowl for the first time, has withdrawn from the game's ad ranks and is retreating instead to focus on pre-game activity. 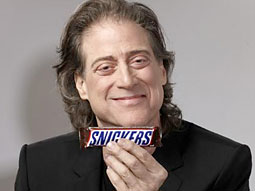 Even Mars has gotten in on the trend, shifting its ad for Snickers to the second quarter from the third after Fox came a-knocking with the chance to run a commercial before the halftime show, according to a statement from Debra A. Sandler, chief consumer officer at Mars Chocolate North America.

"We are moving the airtime of our Snickers Super Bowl spot to the second quarter of the game in order to capitalize on an opportunity presented to us by Fox. We are excited for fans to enjoy the newest iteration of the 'You're Not You When You're Hungry' campaign, starring Richard Lewis and Roseanne Barr, during the second quarter."

No doubt, shifts such as these may be more common than anyone might suspect, and the Super Bowl ad-sales process has long been known to lurch and stop as kickoff time draws closer. But the rapid-fire jumping by advertisers is still, at the very least, eyebrow raising.

TV networks may not mind the shifts. With so much of the ad inventory in the game already accounted for, the network broadcasting the event may have new leverage to ask for top dollar. Indeed, CBS last year faced a similar situation when PepsiCo's beverages unit opted to give up inventory in the Super Bowl that it had reserved months in advance. CBS re-sold the time at a higher price to other clients. Fox has been seeking between $2.8 million and $3 million for a 30-second berth in this year's game between the Green Bay Packers and Pittsburgh Steelers.

Groupon got into the game at least a few weeks ago, according to one person familiar with the ad-sales process, while Pizza Hut dropped its ad berth earlier this week.

And not every advertiser discloses its presence in the Super Bowl weeks in advance, and some forbid the TV network hosting the game from revealing its participation. Last year, Google showed up at the last minute in a clever commercial that managed to add some emotion and sentiment to the very dry, algorithmic process of web searching. No doubt, CBS likely knew of the web giant's participation in advance -- all Super Bowl spots have to go through a rigorous standards-and-practices check -- but the company's participation wasn't known until just a day or so before the initial kickoff.

Other surprises are likely to be in store this Sunday.