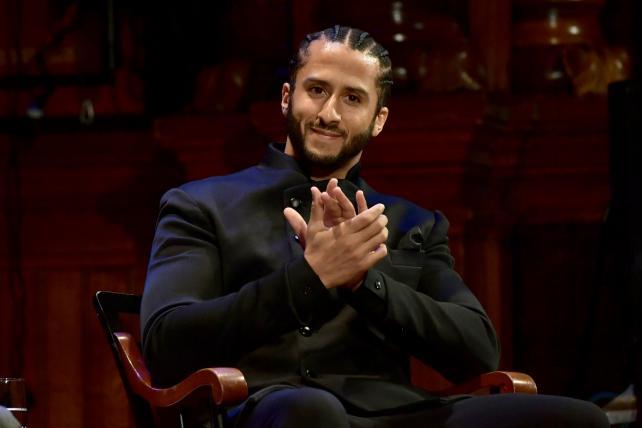 There's been a lot of prognosticating that the conversation around Colin Kaepernick is making advertisers rethink their Super Bowl strategy. But the reality is, unless we see a massive groundswell of celebrity support (and perhaps even if there is), the Super Bowl will continue to be among the most coveted platform for advertisers.

It's business as usual for marketers following comedian Amy Schumer saying she will not appear in any Super Bowl ads next year in a show of support for Kaepernick, and reports that Rihanna and Pink turned down offers to perform at the big game for the same reason, according to media buyers and other people familiar with the situation.

"We have not had any clients express any concerns," says Gibbs Haljun, managing director, media investment at GroupM.

The celebrity boycott is meant to take a shot at the NFL for the way it handled Kaepernick's protests of racial injustice by kneeling during the National Anthem last season. The issue bubbled up again in September, when Nike featured Kaepernick in its new ad campaign.

So far, none of the debate, which included retorts from President Trump, has seemed to impact ad sales. CBS, which will air Super Bowl LIII on Feb. 3, has sold out of all the a-positions (the first spot in a commercial break) in the game, according to people familiar with the situation. This is similar to the position CBS was in three years ago when it last aired the Super Bowl.

The eye network is fetching about $5 million for a 30-second spot, on par with the price tag in recent years, according to media buyers and people familiar with the situation.

As for other celebrities taking the same stance as Schumer, according to the spokeswoman for a major talent agent, while there is a heightened sense of awareness across the entire entertainment business regarding politics, nothing has changed thus far as it relates to clients' willingness to appear in Super Bowl ads.

At a time when TV audiences are becoming increasingly fragmented, the Super Bowl is the only place where advertisers can still get their message seen by a hundred million people at the same time.

King's Hawaiian, which aired its first Super Bowl commercial in 2017, says it has no issue advertising in the game in the current environment (though it has not made a decision about whether it will return next year).

"We do not have any specific concerns regarding the Kaepernick controversy," says Erick Dickens, chief marketing officer at the company. "Over 100 million people will view the Super Bowl and our objective would be simply to reach them."

Certainly, the Super Bowl—and advertising in general—isn't immune to the politically-charged climate.

But simply having an ad run in the big game does not automatically make a brand a target for political debate.

"I just don't think it's a real thing that if I advertise on the Super Bowl that I'm not supporting African Americans or I am supporting whatever the [NFL] stance is," says Peter Daboll, CEO of Ace Metrix.

"If you are just taking an ad in the Super Bowl that doesn't take a political stance, I don't think people watching are going to take issue with that," says Charles R. Taylor, professor of marketing, at Villanova University School of Business.

What is expected is that brands advertising in the Super Bowl will be careful with creative. Similar to last year, when marketers aired more light-hearted commercials and featured their corporate-responsibility efforts, next year's crop of Super Bowl advertisers will likely play it safe.

But for some brands, using the Super Bowl to make a political statement, or a play on political satire, has actually paid off. It's a 10 Haircare ran its first Super Bowl ad in 2017 that opened with the line, "America, we're in for at least four years—of awful hair," a clear dig at President Donald Trump's coif.

"Since that time we've become a seven-figure company and doubled growth year-over-year," Carolyn Aronson, It's a 10 Haircare founder and CEO, said in an email. "We're expanding globally, and this spot really was our big moment that kick-started it all."

It's also important to remember that the Super Bowl has always been a place for marketers to inspire—and celebrate American culture. Cheerios featured a mixed-race couple in its 2014 Super Bowl ad, while Coca-Cola's spot from the same year included people of different ethnicities singing "America the Beautiful" in various languages. And of course there was Chrysler's 2011 Super Bowl commercial with the tagline "Imported From Detroit," that weaved a dominant theme in culture at the time into its creative.