Spuds MacKenzie, Bud Light's popular but controversial "original party animal" from the 1980s, is making a comeback -- as a ghost. The one-time playboy bull terrier will appear as an apparition in the brew's Super Bowl 90-second spot by Wieden & Kennedy New York.

The pooch first waddled onto the social scene in a 1987 Super Bowl ad by DDB Needham Chicago narrated by "Lifestyles of the Rich and Famous" host Robin Leach. The ad showed Spuds pulling up to a bar in a limo and winning the affection of adoring females. 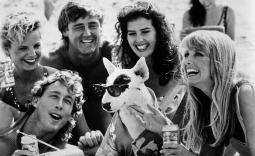 Spuds, back in the day

The Super Bowl LI return is temporary and is meant to coincide with the 30th anniversary of Spuds' debut. Bud Light even brought back Mr. Leach, who in the voiceover for the new spot says, "that was Spuds MacKenzie reminding you, you're not just here for the parties, you're here for the friendships," as Spuds ascends back up into dog heaven carrying a Bud Light.

The ad seeks to tie into Bud Light's new "Famous Among Friends" campaign by using ghost Spuds to lure a man back out with his friends after he was resigned to spend a night in. Anheuser Busch InBev's Bud Light VP Alex Lambrecht said Spuds' return is a one-time event designed only for the Super Bowl ad, which will not be put into regular rotation after the game.

"We wanted to do something that is appropriate to the cultural moment and we feel Super Bowl is that perfect moment to make a statement," Mr. Lambrecht said.

He added: "On Monday, the day after the game, we will send out a final message from Spuds MacKenzie where he is going to be thanking all the viewers [and] all of his friends in the U.S. and being happy that he can go back to afterlife [and] enjoy a Bud Light with the Budweiser frogs," Mr. Lambrecht said, referring to the classic Bud characters.

Ghost Spuds is voiced by actor Carl Weathers, who is known for playing roles like Apollo Creed in the "Rocky" franchise and Chubbs in "Happy Gilmore." Just like the original Spuds -- who died in 1993 -- ghost Spuds is portrayed as a make but is actually a female dog. The bull terrier's real name is "Gigi" and she is a trained acting dog.

The original Spuds quickly became a cultural phenomenon after his 1987 debut. The Los Angeles Times documented his rise in a 1987 story that called him "the nation's most unlikely sex symbol" and a "canine cross between Bruce Willis and John Belushi." Macy's department stores began selling Spuds-inspired gear and the dog made a guest appearance on "Late Night with David Letterman," the newspaper reported.

Spuds was credited with helping to boost Bud Light sales by 20% between 1987 and 1988, according to a New York Times report at the time.

But Anheuser-Busch was targeted by critics who argued that Spuds encouraged underage drinking. Those complaining included Republican Senator Strom Thurmond, who in late 1987 took his case to the Senate floor. "I am fully cognizant of the free-speech rights of the alcohol beverage industry," he said, according to an account from the Associated Press. "However, what is the cost to society of this freedom to advocate unlawful teenage drinking?" Much of the debate involved Spuds MacKenzie licensed gear -- from T-shirts to mugs -- that critics said encouraged underage people to drink.

Asked if AB InBev was expecting any backlash from bringing Spuds back, Mr. Lambrecht said: "We feel that the way we are introducing Spuds is, we are doing it in a very responsible way. He is going to be reminding consumers that it was not about the party, it was all about the friendships -- so we are clearly making sure every single time our message goes out it will be done in a very positive way." 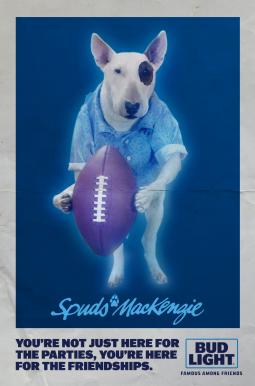 A poster with New Spuds

Baby boomers and most Gen Xers will probably instantly recall Spuds. But will millennials recognize the pooch? "We haven't seen any difference in appreciation of the ad whether people were aware of Spuds versus those who are not," Mr. Lambrecht said, referring to testing.

But in a testament to Spuds' staying power he still enjoys fairly broad-based awareness. More than 70% of people ages 21 and older recognize him, according to AB InBev's research.

That awareness comes despite the dog's relatively brief stint as an ad star. Spuds made his second Super Bowl appearance in 1988 in a spot that showed him ski jumping as a tie-in to the Winter Olympics in Calgary, Canada.

In 1989 he made a cameo playing a wealthy football team owner in an ad that was part of A-B's "Bud Bowl" series. That same year he made a pitch for responsible drinking in a 15-second spot. But Spuds' fame was fleeting. The brewer retired the pooch in 1989.

The dog portraying the original Spuds was a female whose real name was Honey Tree Evil Eye. She died from kidney failure in 1993 at her home in suburban Chicago.

"Spuds was the booster rocket to the brand's success. It was truly one of the most powerful advertising ideas in the last 25 years," then-Bud Light marketing director Bob Lachky was quoted as saying in the Associated Press' obituary for Honey Tree. "The criticism, I remember it," he said. "I just wish some people would have a sense of humor. It was meant to be fun."