And How Social Media May Save It
READ THIS NEXT
Amp spotlight: Who really won the Super Bowl?

When Ridley Scott created Apple's iconic "1984," the company's board didn't want it to air. Newly hired CEO John Sculley, veteran of many a Super Bowl ad as CEO of Pepsi-Cola Co., agreed with the consensus: It's a waste to run an ad that doesn't even show the product.

Apple ended up selling off some of its planned Super Bowl ad time and ran "1984" in the 60-second slot it couldn't unload. The rest, as they say, is history. The Macintosh did change the world as Steve Jobs said it would, and Apple is the most valuable company on the planet. 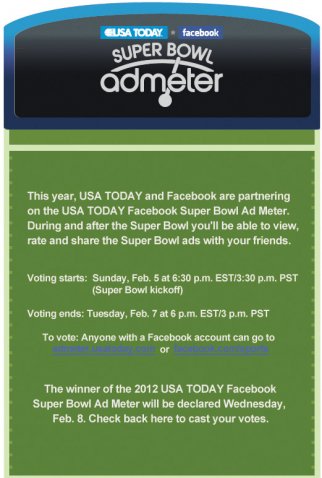 The commercial also ushered in an era in Super Bowl advertising that we still inhabit: the ad as entertainment. That we expect ads during the Super Bowl to be as entertaining as the game itself can largely be traced back to "1984." But if that were the end of the story, we'd all still be watching high-concept minimovies directed by auteurs that made us think or feel different.

But that didn't happen, unless you define "feeling" as what it would be like to get served a beer by a dog or be hazed by chimps in a board meeting. Along the way, the Super Bowl got hijacked by D-list celebrities, talking animals and cheap gags -- anything for a chuckle -- and that trend can be traced to one thing: USA Today's Ad Meter.

In 1989, just a few years after "1984," the national newspaper introduced a revolutionary concept -- and a marketing masterstroke. Take a small panel of people, isolate them in a room with a meter and tell them to constantly turn a dial rating what they're seeing on a scale from one to 10.

The ratings , which came out Monday morning in the paper, became the most immediate and public scorecard for who "won" the Super Bowl, setting the agenda for the media of the day, morning shows and other newspapers.

With so much at stake, to please the clients and bolster their own resumes, directors started creating ads for the panel -- the media equivalent of teaching for the test . How do you get people to have an immediate, positive reaction to something they're seeing? Certainly don't show them a narrative. Make them laugh.

"It better be something that rings some bells or gets measured on the USA Today Richter Scale," said TBWA/MediaArts Chairman Lee Clow. But the creator of "1984" also believes it means fewer ads like that one have been made. "It's a big challenge to spend $3 million on the time and then a million on the spot. It's kinda difficult to then come in 19th on the USA Today 'How'd you like our spot?' scale."

Not just difficult, but dangerous. In 2007, CareerBuilder famously put its business up for review the day after the Super Bowl when its Big Game ad did not crack the Ad Meter's top 10. Cramer-Krasselt promptly resigned the account in protest. (It's worth noting that the spot, for the first time in two years, did not feature the CareerBuilder chimps, but instead was a high-

concept spot set in a jungle.)

One reason the USA Today Ad Meter remained the arbiter for so long is that the decision to advertise in the Super Bowl is the most expensive dice-roll of the year.

E-Trade CMO Nicholas Utton. "Most CMOs know you don't want to be in the bottom of the list because some people consider it to be the definitive methodology."

Even so, the poll's influence is waning. Today, most marketers combine immediate feedback with sophisticated research from Nielsen, GFK, Zeta Interactive, Kantar or Ace Metrix to understand the long-term impact of spots. Now that the real-time web has gone mass in the form of Facebook and Twitter, marketers and agencies have dozens of new services and dashboards to monitor, as well as the means to influence the discussion as it happens, not to mention giving the commentariat something else to write about.

Second, YouTube views and blog posts allow an ad to succeed or fail outside traditional media structures. VW's "The Force" has been viewed more than 90 million times since Super Bowl 2011.

In an age where some Super Bowl campaigns seem to exist mostly to direct viewers to the web, the idea of judging an ad by the real-time reactions of some people in a room seems quaint and anachronistic.

"If you go back 10 years, it was the only thing," said CMO Scott Keogh. "You didn't have social, YouTube views, you didn't have the blogs and all the running commentary. Basically, the press would report on the Ad Meter. Now, the press reports on a lot of things," said Mr. Keogh, who is placing one 60-second spot in the first quarter this year.

Even USA Today has lost faith in the ability of the panel alone to pick a winner. This year, in addition to selecting two panels of 150 in cities that USA Today won't reveal, the paper is opening up the voting to the public on Facebook. As a result, for the first time since 1989, USA Today won't declare a "winner" in Monday morning's paper. The true winner won't be declared until after the polls close Wednesday.

Why not dump the panel entirely? In social media, consumers will rate only the ads they love and hate, a spokesperson said. The panel is the only way USA Today sees to be sure every ad gets a vote.

Let's be clear: In the minds of CMOs, the USA Today Ad Meter still matters. It's just not the only thing that matters. No one wants to bomb the Ad Meter -- or any well-publicized indices, for that matter -- but increasingly it's one data point in the deluge CMOs have to consider after the game.

E-Trade's Mr. Utton, for example, is bringing its talking baby to the Super Bowl for the fifth year in a row, despite the fact the investing infant has never been top-rated by USA Today and last year came in at an undistinguished 15.

Joel Ewanick, global CMO for General Motors, said that the Ad Meter is only one of the many things his team will look at.

"I'll have four screens going during the game in front of me, showing me charts and graphs," Mr. Ewanick said. "We have five or six other groups monitoring, then we'll have next-day research, copy testing, focus groups. There's a lot of money involved here. You have to really understand your ROI to make sure you learn from this, so you can apply that the next year."

Still, no matter how marginal, no one wants to bomb the Ad Meter. "It's still relevant because it's the official one. It's published, its big," said TBWA/Chiat Day Chief Creative Officer Rob Schwartz. "Clients can still point to it and say, 'We were No. 4 on the Ad Meter.' If you're No. 32 on the Ad Meter, better put our résumés together."

When will we once again get more Super Bowl ads like "1984"? When creatives stop making spots to incite an instant reaction, sort of like Chrysler's two-minute "Imported From Detroit," a high-concept, big-idea spot that put Detroit before the car and even before the celebrity (Eminem). It was great creative, by most measures, and probably the closest thing to "1984" in its ambition since, well, "1984."

A year later, President Obama singled out Chrysler as an example that America can compete once again in manufacturing.

Predictably, "Imported From Detroit" bombed on the Ad Meter, coming in at No. 43.