How Volkswagen Conducted Its Canine Chorus

The Making of 'The Bark Side': Ad Age Talks to the People Behind the Pup-Filled Follow-up to 'The Force'
READ THIS NEXT
Super Bowl LVI is 85% sold out of commercial time

Notable orchestras have long interpreted John Williams' familiar "Star Wars" score, and in the '70s, Bill Murray appeared on "Saturday Night Live" singing his version of the theme: "Star Wars, nothing but Star Wars, give me those Star Wars!"

Mr. Murray has now been upstaged by ... the dogs.

Last week, Volkswagen and Deutsch, Los Angeles, unveiled a 60-second Super Bowl teaser on YouTube and then on broadcast TV during an episode of "The Middle" on ABC. The spot stars mutts barking a canine rendition of "The Imperial March," aka "Darth Vader's Theme," the track featured in last year's VW Super Bowl darling, "The Force."

The dozen dogs, selected from a pool of 40 who "auditioned," were chosen not for their vocal chops but, in some cases, for their resemblance to "Star Wars" characters, according to Tim Mahoney, chief product and marketing officer for Volkswagen of America. "See if you can find Chewbacca," he said, adding, "If you have a pet in the house, this ad drives them crazy."

The idea behind "The Bark Side" was to create an ad to promote an ad. "We were among a few brands last year who pre-released our Super Bowl ad, and the feeling was we were ahead of the pack," said Mark Hunter, chief creative officer for Deutsch, apparently with no pun intended. "So this year, it's what can we do to continue to set media trends." 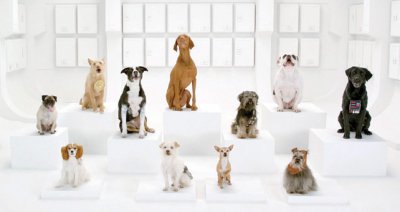 Mr. Hunter said "The Bark Side" is about "giving you enough information to whet your appetite. It would be a strange teaser if it didn't reflect what was coming."

The ad was directed by Keith Schofield of Caviar Content, who said the dogs were shot together and then separately on the set, barking to a temporary track created by Endless Noise's Jeff Elmassian, who was also behind the arrangement of John William's original Vader march for "The Force." Prior to production, "we talked about how this should probably be handled like a music video," said Deutsch Director of Integrated Content Vic Palumbo. "We needed to create the track first and then figure out who the dogs are, what notes they're going to be singing."

For the final track, Mr. Elmassian created a mix of archived dog barks and yelps recorded on set rounded out by newly recorded woofs and howls-a number of which were later pitched to match the actual tune. One of the biggest challenges was the balancing act of using unaltered dog barks and digitally enhanced ones. The final mix featured a combination of both. "The human ear is discerning enough that even a lay person can tell when something is synthetic," said Mr. Elmassian. "You want a certain amount of barks to not be effected. Your ear will anchor onto enough of those and start to forgive some of the sounds that do border more on the effected side."

There was also the problem of matching yelp to snout. "We wanted the barks to sound like they were actually intoning a pitch, but it's also important that we needed them to sound like the specific dog," said Mr. Elmassian. "You may have a great Labrador with the right pitch, but at that moment it's the Chihuahua barking. You can't put a Lab's bark into the Chihuahua voice."

Assembling it all involved a very delicate dance between sound and edit. Mr. Elmassian said he also collaborated extensively with Editor Nicholas Wayman-Harris of Union. The agency teamed with Method Studios on the effects, but "it was important to minimize the CG work so it felt natural," explained Deutsch Group Creative Director Jerome Austria. Overall, the teaser was a lesson in restraint-and how important it is to good comedy. None of the dogs don a Vader mask or Leia cinnamon-bun hairpieces. Only few have hints of costume, like the AT-AT poncho of the whippet in the final frame. The barks themselves start out sounding a bit cryptic and random, until they build into something really familiar.

"We were trying to not be too heavy-handed," said Deutsch Group Creative Director Michael Kadin. "You don't want to overly art-direct it, like if they all came out with eye patches and sang pirate songs."

As for the continuing "Star Wars" theme, "We are leveraging our equity from last year," said Mr. Mahoney, referring to "The Force." According to Deutsch's Mr. Austria, within the first 24 hours of its launch, "The Bark Side" surpassed 1.6 million views. Within the same time frame, "The Force" earned around 1.1 million hits.

The canine choir teaser leads viewers to a site where they can invite their friends to Bowl parties with a customized "Star Wars" title crawl. "It probably raises more questions than it answers," added fellow Group Creative Director Matt Ian. "We like that it's starting to tell the world, 'Whatever you may have expected it to be, it may not be that .'"

But what we do know for certain is this: According to Mr. Kadin, the agency brought back Director Lance Acord and Editor Jim Haygood for the actual big game spot. "We had a winning combination," he said, "so why mess with that ?"

And what of VW's 60-second commercial on the Bowl bought for the VW Beetle? Will "Star Wars" figure in?