Make-Goods Be Damned: NBC Crams Over 3,000 Promos Into Olympics

'Timeless,' NFL Get Biggest Push in Rio Games
READ THIS NEXT
Tokyo Olympics delayed one year after virus wipes out 2020 Games 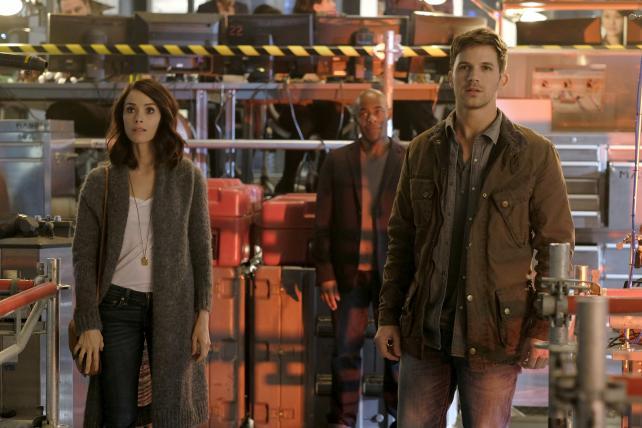 NBC's 'Timeless' is getting a lot of love during Olympics coverage
Credit: Joe Lederer/NBC

NBC won't get out of Rio de Janeiro without handing over a chunk of make-goods to its Olympics advertisers, but if it's willing to pull back a bit on its self-promotional efforts, the network would appear to have ample opportunities to square its guarantees without taking a financial hit.

According to iSpot.tv, NBC and its cable network siblings have aired no fewer than 3,066 in-house plugs during the first 12 days of Olympics coverage, a promotional blitz that includes 364 primetime spots. Teasers for programming on the broadcast network alone have aired 1,490 times, of which 231, or 16%, ran in primetime.

If frequency is any indication of where NBC's priorities lie, then the Peacock's primary focus is to psyche viewers up for the premiere of its new sci-fi drama series "Timeless." A 60-second cutdown for the latest occupant of NBC's plum Monday 10 p.m. slot has aired 266 times since the Games began on August 5, appearing in everything from USA Network's presentation of the preliminary round of badminton competition to NBC's Sunday night track and field coverage.

While it should come as no surprise that NBC is putting so much promotional muscle into "Timeless" -- as the lead-out to the weekly two-hour installment of "The Voice," the show will command the highest ad rates for any of the network's scripted series -- it remains to be seen if the barrage of teasers will help boost early sampling. As "Timeless" doesn't premiere until Oct. 3, NBC will have to keep up the marketing initiative well after Sunday night's closing ceremonies.

NBC is also using its Olympics megaphone to make some noise for the eleventh season of "Sunday Night Football." Various 15- and 30-second promos for the premiere primetime NFL package have aired 263 times in NBC's Olympics coverage, with NBCSN serving as the primary vehicle. (Among the spots that have run during the Rio Games are a brief clip featuring "SNF" chanteuse Carrie Underwood and an NFC-skewing effort starring Giants wideout Victor Cruz, Seahawks safety Kam Chancellor and Cowboys receiver Dez Bryant.)

Also reaping the benefits of NBC's Olympian reach are the Nascar Sprint Cup Series (157 spots) and, somewhat paradoxically, the Games themselves (114). (If nothing else, the spots advising people who are actively watching the Olympics to watch more Olympics might be the first promos NBC sacrifices on the alter of make-goods.) NBC's coverage of the upcoming Premier League season (46 spots), its five-game "Thursday Night Football" rotation (41), the 2016 Paralympic Games (22) and Notre Dame football (20) also have been well-represented throughout the past two weeks.

"Timeless" aside, the most heavily promoted NBC entertainment programs include the sophomore comedy "Superstore," which returns Thursday, Sept. 22 (75 spots); the new Kristen Bell-Ted Danson afterlife sitcom "The Good Place" (70); the eleventh cycle of "The Voice" (66); the upcoming ensemble drama "This Is Us" (62) and "The Tonight Show" (37).

On the cable front, Bravo (340 spots), USA Network (303), the Golf Channel (254) and MSNBC (237) have been given the most promotional time during the Olympics, while Oxygen, Esquire Network and the kids channel Sprout have been all but invisible, with just two spots each. NBC has given no love whatsoever to niche nets Chiller, Cloo TV and Universal HD; through Wednesday evening, none of these networks had been promoted during the Rio Games.

Bravo's in-house promos have aired almost exclusively during the network's tennis coverage, although a spot or two for its scripted comedy "Odd Mom Out" has popped up here and there on NBCSN's morning telecasts and during NBC's afternoon kayaking and rowing coverage. Of all Bravo shows, "Odd Mom Out" has been the beneficiary of the most Olympics exposure, with teasers airing 68 times since the Games began.

As one might expect, USA's biggest push is for its paranoid critics' darling "Mr. Robot." Promos for the show, which on Tuesday was renewed for a third season, have run 98 times during various Olympics telecasts on USA, NBC, Bravo and NBCSN. In-game spots for runner-up "Queen of the South" have aired 58 times, per iSpot estimates.

Buyers estimate that networks typically set aside around 10% to 15% of their available inventory for ADUs, or audience deficiency units. As much as handing over inventory that originally had been earmarked for in-house spots would seem like one of the more painless ways to make good on under-deliveries, the deluge of promos has yet to taper off. In the past 24 hours alone, NBC has aired 334 promos, a torrent that includes 172 teasers for the broadcast primetime lineup.

However NBC settles its accounts -- with an average delivery of a 16.2 household rating (an aggregate figure that includes streaming and the cable ratings), the Peacock is underachieving by nearly 2 whole ratings points, or 10% -- the Summer Olympics have generated a staggering amount of ad revenue. As NBC Sports Group chairman Mark Lazarus reiterated last week, the company sold $1.2 billion in ad time before the Games began, and managed to add another $30 million in scatter buys. And contrary to the endless social-media whinging about NBC's alleged insistence upon over-stuffing its coverage with onerous spot loads, the massive dollar volume is as much a function of pricing as sheer tonnage. According to Kantar Media analysis of the first seven days of NBC's Rio coverage, the average hourly spot load in the 2016 Summer Olympics works out to 15 minutes and 37 seconds, which is effectively the same frequency as the first week of the London Games (15 minutes and 38 seconds).

Viewers' perception that NBC is beefing up its Olympics ad loads is likely an unconscious reaction to more frequent breaks. "While the overall amount of commercial time has been normal, the number of commercial interruptions has been atypical, "said Kantar Media chief research officer Jon Swollen. "There has been an average of seven-to-eight ad breaks per hour compared to a norm of five-to-six in regular primetime programming. More frequent breaks fuel the perception of over-commercialization, even as the duration of these pods has been a bit shorter."

Per iSpot.tv data, the top 10 Olympics advertisers (Chevrolet, Geico, BMW, Samsung Mobile, Visa, Ford, Citi, Exxon Mobil, McDonald's, Toyota) thus far have spent a total of $242.1 million on national airtime. Automotive is by far the Rio Games' most ardent backer, as car manufacturers have funneled $152.3 million into NBC's coffers, or more than twice the outlay of the No. 2 category (insurance, $70.8 million). Movies take the bronze with $61.1 million in Olympic TV spend from 14 studios.