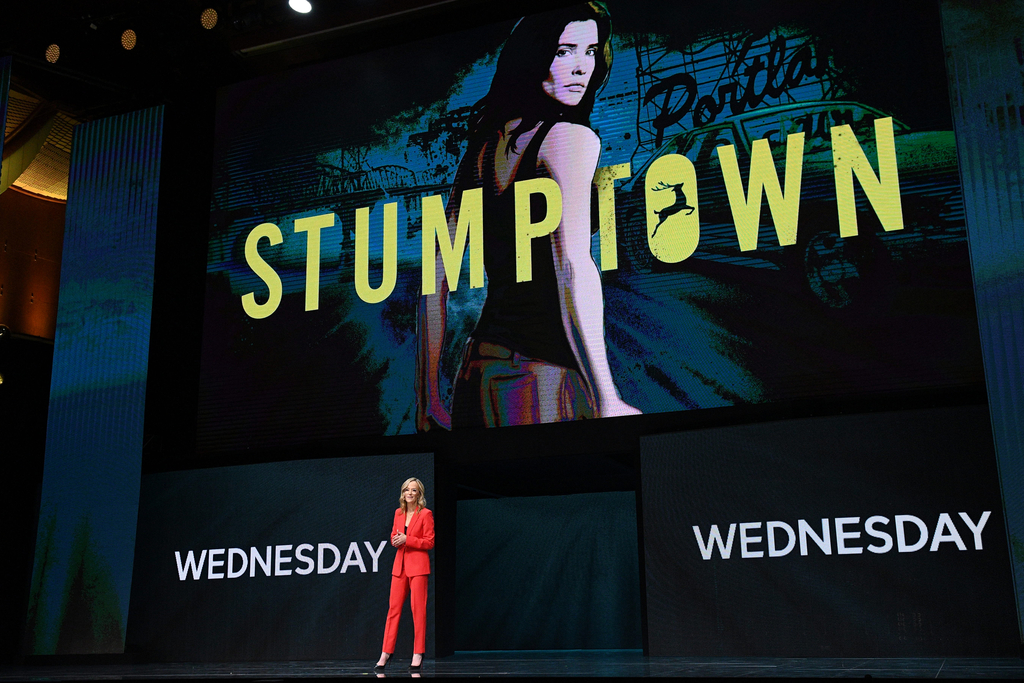 The Disney upfront at Lincoln Center in New York City.

Walt Disney told attendees to arrive early to its upfront presentation at Manhattan’s Lincoln Center on Tuesday afternoon for an immersive “Disney experience.” What that experience was wasn't clear. Agency executives and marketers waited around David Geffen Hall for the doors to open. It was like waiting in line to meet Mickey Mouse at Disney World, so maybe, in a way, attendees were treated to a true Disney experience.

This year’s Disney experience was certainly different than those of previous years, with posters of the cast of FX’s “It’s Always Sunny in Philadelphia” donning a Disney logo and National Geographic showcasing series like “Genius: Aretha Franklin” alongside ABC fare like “Modern Family.”

This was, of course, Disney’s first upfront presentation with the full suite of networks it acquired since it closed its deal to acquire assets of 21st Century Fox.

In an interesting move, Kevin Mayer, chairman of direct-to-consumer and international, opened the show, despite not overseeing programming. Mayer noted that as of Tuesday, Disney has assumed full control of Hulu thanks to a deal to buy out Comcast’s stake in the platform.

This was also the first time Disney featured ESPN alongside ABC and Freeform during the upfronts.

As has become tradition at an ESPN upfront, anchor Kenny Mayne was on hand (albeit through a video feed from the overflow area at Alice Tully Hall across the street) to sling jokes about ESPN’s corporate home. He called Disney’s new organization a black hole. “You give us your money and it is never fucking coming back. It’s gone. It will feel like a million light years away. But you do get a 30-second spot on color TV.”

“You think Bob Iger is showing up for the bullshit?,” he continued. “Bob Iger is trying to figure out what in the fuck this organization is about.”

Mayne even gave a shout-out to Ad Age, talking about new ad formats he invented, including something called a “B+ position.” “Put that on the cover of Ad Age,” he said.

ABC was relegated to the end of the more than two-hour presentation. New ABC entertainment chief Karey Burke took the audience through the alphabet network’s 2019-2020 schedule, which includes just three new scripted series on its fall slate.

And she played into jokes about “Fresh Off the Boat” star Constance Wu, who, upon finding out the comedy was renewed for another season, expressed disappointment on Twitter. The actress, who also starred in “Crazy Rich Asians,” later explained that the renewal meant she had to give up another project that challenged her.

Burke assured the audience that “Fresh Off the Boat” would return, “still starring Constance Wu.”

Later in the presentation, Jimmy Kimmel even showed Wu’s tweets on a screen, saying, “Only on ABC is getting your show picked up the worst thing that can happen to you.”

Kimmel had plenty of other zingers ready, including:

“I can’t believe Channing left us for Netflix," he said, referring to Channing Dungey, the former president of ABC who left for the streaming platform late last year. “What is she? Our viewers?”

“Like the genital herpes it thrives on, ‘The Bachelor’ will never go away.”

“Remember last year when you guys gave Les Moonves a standing ovation? That was funny. How is it possible a network whose logo is literally an eye didn’t see that coming?”

“Fox is now the network equivalent of a divorced dad’s refrigerator… 18-49 isn’t even their demo anymore, it is the number of people that still work there.”