As Kids' Networks Pitch Advertisers, High Stakes for No. 1 Nickelodeon

The kids' networks' upfronts will hit high gear this week as the two biggest channels present their upcoming schedules to advertisers -- with Nickelodeon's recent ratings decline remaining a backdrop to negotiations.

Nickelodeon, the Viacom powerhouse and category leader, will introduce a slew of new programs aimed at a variety of ages on Wednesday as it tries to counter criticism that it has relied too long on aging series such as "SpongeBob SquarePants."

Nick is still No. 1 overall, but Disney Channel unseated it among 6- to 11-year-olds last year and significantly closed the gap among children ages 2 to 11. Last month, Disney tied Nickelodeon for the first time in the 2-11 demo.

Cartoon Network is also quietly coming up, taking the No. 2 spot for the week among 6- to 11-year-olds several times in the first quarter of 2012.

But Nickelodeon is adamant that it won't go down without a fight. "We have no intention of giving up our No. 1 spot," said Jim Perry, exec VP for 360 Brand Sales at Nickelodeon. "We are addressing the ratings issue with our clients head-on, hand-in-hand."

The network remains the leader for advertisers despite its ratings hiccups. "Nick's absolute ratings are so much higher than anyone else," said Gerri Donini, senior VP for broadcast at media-buying shop RJ Palmer. "You have to be on Nick if you are a kids' buyer. You need it for ratings points."

Nickelodeon's ratings declines may also actually drive up the cost advertisers have to pay kids' networks to reach a thousand viewers, a measure known as CPMs, because it means ad inventory has become more scarce. "Inventory is still limited and now ratings have shrunk," said Jack Myers, chairman of Media Advisory Group. "Digital is not significant enough to offset demand for TV. We are going to see a significant CPM increase across the board for kids."

Advertisers would like to see a big show emerge, however, after several years of subdued excitement in the space.

"We haven't really seen a new big hit in some time to the caliber of 'Hannah Montana,' 'SpongeBob SquarePants' and 'iCarly,' or TV movies like 'High School Musical,'" said Darcy Bowe, associate activation director at Starcom USA. "There have been some successful shows, but nothing that 's followed has been a runaway hit. Networks recognize this too, and we will be waiting to hear the strategy for how they are going about finding the next hit."

Moms will be a focal point for kids' networks, which are looking to the adult market as a way to grow revenue.

"There's a bigger push for moms than we have seen in the past, since that 's where the money and growth is ," Ms. Bowe said. "Kids isn't where you'll see growth in revenue and volume. Moms are a great way to grow dollars."

NickMom, a nightly block of programming, will launch at the end of the year on Nick Jr., which Mr. Perry says gives the brand an opportunity to talk to the adult market.

The Hub, a partnership between Discovery Communications and Hasbro, has also latched on to the idea of appealing to parents' nostalgia. With the success of classics such as "Transformers," The Hub has been attracting new advertisers from insurance, financial, beverages, travel and leisure, apparel, video gaming and technology categories, according to Margaret Loesch, president and CEO of the network.

"CPMs for kids' products are not the same for adults," she said. "In order to grow our business we need to look elsewhere."

Disney is on a similar track. "Moms love Disney. It is a great place to target moms, and she is a big part of the equation," said Rita Ferro, executive vice president, Disney media sales and marketing.

Disney Channel doesn't accept traditional advertising, but does have sponsorships. Disney Junior, a network that will launch on March 23, also only has sponsorship opportunities. The Disney XD network sells both regular commercials and sponsorships.

Kids' networks on the whole are expecting upfront demand and deal-making on par with last year based on current marketplace trends.

John O' Hara, Cartoon Network's exec VP of advertising sales and marketing, noted that pre-Easter inventory has sold well, with strength in toys and movies and a slow return of video games. The food business remains weak for kids because of regulation that makes it more difficult to advertise fatty and sugary snacks to them, but Mr. O' Hara said Cartoon Network is offsetting that with some new business from retail and apparel partners. 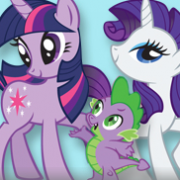 'My Little Pony Friendship is Magic'

Tuesday, March 13, 6 p.m.
Hard Rock Cafe
Disney Channel unseated Nickelodeon in 2011 among kids 6 to 11 and significantly narrowed the gap among children 2 to 11.