Though Fremantle's New Show Has Simon Cowell, That's All It Shares With 'Idol' -- and It's Trying Out a Whole New Ad Strategy 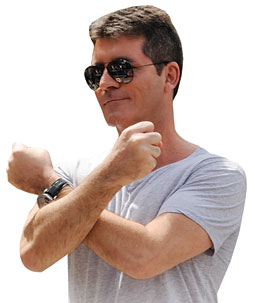 Simon Cowell
Credit:
Ray Mickshaw/Fox
Using lessons learned from the way some of the nation's flashiest marketers -- think Coke, Ford, AT&T and Apple -- have been woven into "Idol" over the years, Fox and show producer FremantleMedia are adopting a very different and significantly more complex model for "X Factor."

Rather than counting on a thimbleful of advertisers to carry the program for the entire length of the season, the two will instead broaden the field. Only Pepsi has been sold a season-long sponsorship of the program; other marketers are free to purchase pacts that will insert their names and products into "X" -- as well as link to various social-media and digitally-based extensions -- for just a few episodes, according to media buyers and other people familiar with the program.

The offering seems to have appeal. Fox and Fremantle have already signed a second sponsor for the show, according to Keith Hindle, chief executive of Fremantle Media Enterprises Americas. Mr. Hindle declined to name the advertiser or the category from which it hails but the program has yet to announce an auto sponsor, and General Motors and Hyundai have been in the market for big-audience content. Fox declined to comment on potential new sponsors for "X Factor."

Dollar signs are likely to abound. A 30-second spot in "American Idol" in last year's upfront negotiations averaged $400,546 or $467,617, depending on which night of the week marketers wanted ("Idol" typically airs twice each week). And the pair now wants to extend advertising from traditional TV ads to marketing that might appear when viewers "dual screen" the "X Factor" experience (watching the show on TV while using a laptop or mobile device); when fans download a music track they heard on the show; or when they attend an audition related to the buzzy contest.

"By approaching the major advertisers with lots of 'off-air' ideas at the same time we approach them about media packages, it becomes a much richer property to them," said Mr. Hindle.

When "Idol" debuted in 2002, Fox executives had no idea they had a hit of such magnitude on their hands. Many networks had passed on "American Idol," based on a popular program franchise Fremantle already had up and running in other parts of the globe. So the network was happy to secure Coca-Cola, Ford Motor Co. and AT&T for season-long sponsorships that have, over the years, given rise to red Coke cups on the judges' table and AT&T's helping viewers vote for their favorite performer.

In the end, however, the move has proven limiting. Fox airs just two hours of prime time a night. When "Idol" comes on, carrying with it an obvious sponsorship from a major automaker, a top beverage company and a competitive telecommunications concern, it tamps down the number of ads Fox can run from rival companies that evening. And it prevents other advertisers in those categories from supporting "Idol" in a bigger way.

But it also creates new complexity, Fremantle's Mr. Hindle acknowledged. It's one thing to work with the same three sponsors every year, as "American Idol" has. It's quite another to propose a structure that could lead to a different assortment of advertisers appearing within the program each week. "In season one, we are very much up for giving that a try," said Mr. Hindle. "It's ambitious, more of a challenge, but we'll find out what works effectively and I'm sure we'll extend the things that work and cut back the things that don't fit."

To smooth out some of what will inevitably be bumps in the road, Fox and Fremantle met with advertisers well before upfront season. Indeed, Pepsi, which reportedly agreed to pay $60 million" for its "X Factor" sponsorship, officially acknowledged its alliance with the new show in January. At least two major ad-buying firms from the same large ad-holding concern were negotiating with Fox for "X Factor" last week, according to one person familiar with the situation.

Success of the program is critical for Fox, which has often languished in the fall due to having to work around telecasts of the World Series. While the network has retooled "Idol" this year to positive response, the fact remains that the show is maturing and has lost some of its audience. "If 'X Factor' is a big hit in the U.S. as it has been in the U.K., it would mean that Fox would likely be the overall No. 1 in the coveted 18-to-49 demo, instead of typically just when 'American Idol's' on," said Christopher Vollmer, leader of the global media and entertainment practice at Booz & Co. "A well-rated 'X Factor' would effectively be a game changer for Fox, enabling the network to be television's undisputed ratings leader" in the audience marketers covet most, he said.

The show has some wind at its back. "Idol," with Aerosmith singer Steven Tyler leading the charge, has new critical momentum. NBC's "The Voice," which Mr. Hindle says has adopted some portions of "X Factor's" format, is a success, so far, for that network. And then there is the anticipation of seeing former "Idol" judges Simon Cowell and Paula Abdul, with their interaction that is by turns acerbic and daffy, joined together anew on "X."

"I think they are trying to guarantee themselves strong early ratings based on curiosity alone," said Brad Ricca, a fellow at Case Western Reserve University in Cleveland who teaches classes on popular culture. "Since it's a contest show, many viewers will then feel obligated to see it through." In a signal of how important the program is to the network, Fox has been promoting "X Factor" on air since November 2010 -- a full 10 months before it launches. Fox ran a promo for the show during its Super Bowl telecast this year; advertised the show in malls, karaoke bars and coffee shops; and dispatched Mr. Cowell and program executives to press outlets, Skype chats, Facebook sessions and other media resources starting in February.