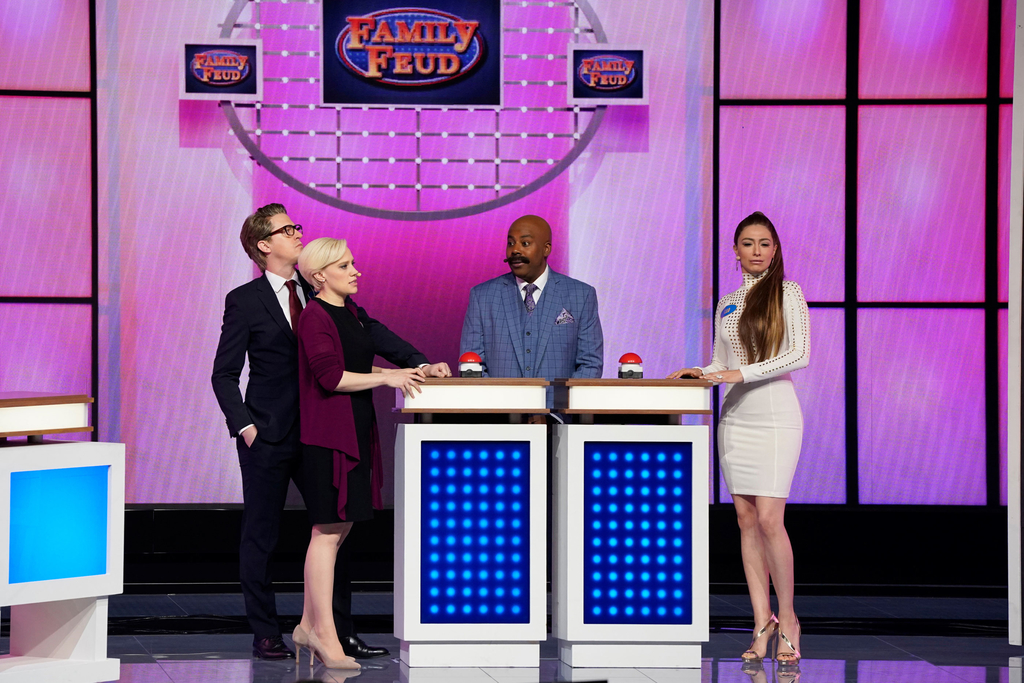 ‘SNL’ cast members in a ‘Family Feud’ spoof at the NBC upfront presentation.

Welcome to our special pop-up TV upfronts roundup. Each day this week we're bringing you breaking news and some of the best (and worst) of TV’s dog-and-pony show, curated by Jeanine Poggi, senior editor, and delivered directly to your inbox. Get it in your email by signing up here.

Fox, the new startup
While NBC is doubling down on its comedy efforts, a new, slimmed-down Fox won’t have any live-action comedies on its air this fall. In fact, with its emphasis on live sports, it’s made it very difficult for new programming to crack its prime-time lineup, Anthony Crupi writes.

Among the biggest news for next season: The sixth season of “Empire” will be its last. Here’s a look at Fox’s 2019-2020 schedule and trailers for its new series.

This is the first upfront for Fox since select assets were sold off to Walt Disney, leaving it with the broadcast channel, news and sports. And its presentation at the Beacon Theater was a ping-pong between entertainment programming and sports.

Fox’s new entertainment chief Charlie Collier referred to the company as a “startup” and opened the presentation by saying, “What would you do if you had the chance to start all over again?” The New York Times sat down with Collier ahead of the upfronts. But as Crupi puts it: “It’s hard to sell a dark-horse narrative when you’re airing the next Super Bowl...”

In a moment of pure nostalgia, the cast of “Beverly Hills, 90210” reunited on stage to promote the six-episode reboot of the 1990’s teen drama airing this summer. The only thing missing was the crowd chanting “Donna Martin graduate.”

Broadcast purgatory
NBC Universal’s dog-and-pony show was an interesting limbo between the traditions of broadcast TV and video’s streaming future. The most memorable thing from the peacock’s presentation at Radio City Music Hall Monday morning wasn’t its new programming (you can watch the trailers here), but how it’s thinking about its upcoming streaming service.

A few things we learned about the free, ad-supported platform: It is now slated to debut in mid-2020 (it was originally expected to drop by the end of the year), and it will very likely include “The Office.”

Here are some other highlights:

“The Tonight Show” host Jimmy Fallon made his first NBCU upfront appearance in several years. He joined John Cena in a video parody of Apple’s “1984” ad before hitting the stage to introduce his “idol” Linda Yaccarino, chairman, advertising and partnerships at NBCU.

Speaking of comebacks, Brian Williams also took the stage after being largely out of the spotlight following his 2015 suspension from NBC (and sidelining to MSNBC).

There’s nothing like a performance from Latin superstar Luis Fonsi and gyrating dancers at 11 a.m. on a Monday.

Best Meyers zingers
“Late Night” host Seth Meyers was on hand to gently ridicule his home network and the industry at large.

He poked fun at the industry term OTT, which stands for over-the-top, saying that by 2022 it will stand for “oh that thing.”

As for the name of NBCU’s platform, Meyers suggested calling it “NBC Plus,” alluding to the name of Walt Disney’s streaming service, or “NBC Gold.” “We are not going to go with some crazy name like ‘Apollo Sword’ or ‘Hulu.’”

Meyers also recommended not naming the service after parent Comcast. “No one’s had to wait four hours for the NBC guy to show up,” he said.

Referencing NBC’s pick-up of “Brooklyn Nine-Nine” last year after it was canceled by Fox, Meyers said, “I heard next week HBO is airing its last ‘Game of Thrones.’ We should pick that up. I can’t believe they canceled it. I think that show is very popular.”

Some pastrami with your shrimp
Amazon may not have a presence at the TV upfronts, but it is certainly looming in the background—both metaphorically and now physically. Amazon is bringing its Carnegie Deli food truck in honor of its original series “The Marvelous Mrs. Maisel” to the upfronts. Today, the truck appeared in front of Radio City Music Hall where NBC Universal kicked off the week. If you have a hankering for a pastrami sandwich or a black-and-white cookie, the whereabouts of the truck throughout the week can be found here.