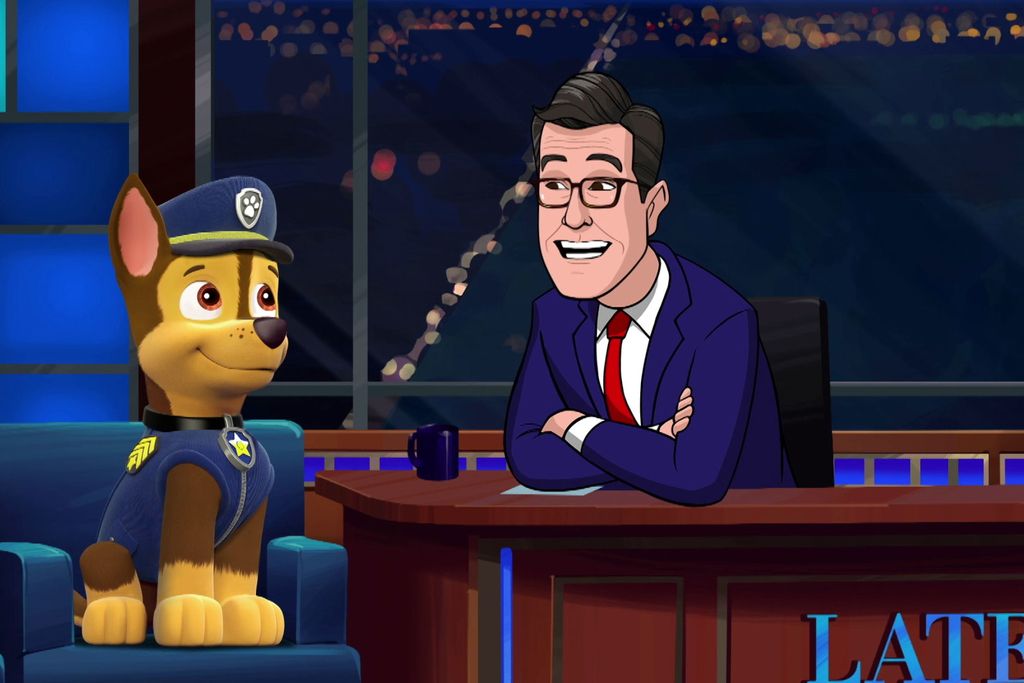 Chase from Nickelodeon's Paw Patrol and a cartoon Stephen Colbert from The Late Show with Stephen Colbert, as seen during the ViacomCBS Upfront @Home virtual presentation on Monday, May 18, 2020.

ViacomCBS set out to answer the question: Can late-night hosts' jokes about data and targeting translate outside of Carnegie Hall?

The company released the first of its two-day virtual presentation on Monday, meant to serve as a substitute for its annual upfront dog-and-pony show, canceled due to the coronavirus pandemic.

This is the first year ViacomCBS will be going to market as a combined company and, in an effort to promote its new capabilities, adopted the slogan "Simply Stronger.” (This created a perfect opportunity to utilize Britney Spears’ 2000 hit “Stronger.”)

For the kids watching alongside their parents at home, the video featured an interview between an animated Stephen Colbert and Chase from the Nickelodeon cartoon “Paw Patrol.” It also included appearances by JoJo Siwa (some of you may know her as the bow girl), and Iain Armitage, star of CBS’ “Young Sheldon,” talking about connected TV.

Sports, of course, is the biggest question mark for advertisers heading into the annual upfront haggle, with most live sports shut down due to the pandemic. The CBS Sports’ segment touched upon that uncertainty. “We got em all, let’s hope,” NFL announcer Jim Nantz said to NFL great Tony Romo, referring to CBS’ roster of sports, which include the PGA Tour, college football and Super Bowl LV.

In an interview with Ad Age, Jo Ann Ross, president and chief advertising revenue officer, ViacomCBS, said, “We are in conversation [with advertisers] for February 2021," she said.

Of course there will be caveats. "Obviously there will be a big asterisk, the 'what if.' What if is isn't in February? What if it has to slide? What if the schedule gets, basically, lengthened because of a late start?' We are optimistic, and we are already in conversations with a lot of our clients about NFL and other live sports," she said.

In an effort to broaden its NFL fan base, the company will air a playoff game simultaneously on CBS and Nickelodeon.

In a similar show of unity and the ability to span generations, ViacomCBS will also simulcast its “Kid of the Year” awards on both channels.

As with any upfront presentation, ViacomCBS didn’t miss an opportunity to attempt to poke fun at the TV industry and its jargon.

During the quarantine, Ross said, “some people took up knitting or baking or jigsaw puzzling,” but she used it “as an opportunity to brush up on my advanced analytics.”

And of course, late-night hosts were on hand to lend some humor.

And James Corden, host of “The Late Late Show” wrapped things up by reminding advertisers that “The box in the corner is the thing that can give us the collective experience we have all been sorely missing.”