READ THIS NEXT
Watch: Advocating for diversity in advertising 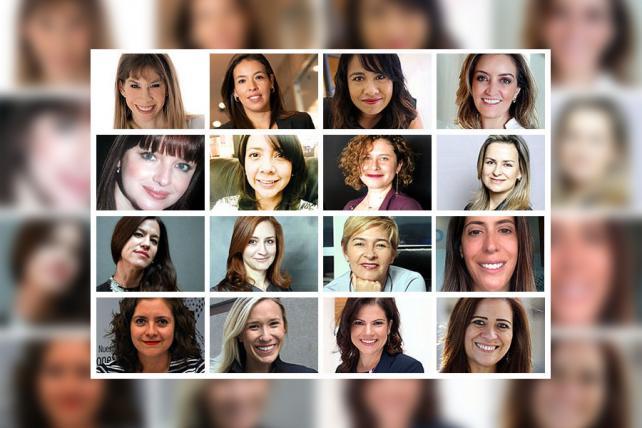 For the fourth consecutive year, Adlatina and Ad Age are recognizing a group of women who stand out in the field of marketing and communications in Mexico. These 16 women are being honored for their significant accomplishments in the ad and marketing industries and will be hosted at an event in Mexico City on March 26.

Berman has led Google Mexico's CPG practice for the last three years, and was responsible for YouTube's commercial strategy for Spanish speaking Latin America. Before joining Google, she was in charge of digital business at Grupo Expansión. There, Berman launched and headed most of its products, including Quien.com, Chilango.com, and the group's partnerships with CNN: CNNMexico.com and CNN Expansión.com. Her role was key to the company's digital transformation. Berman was also a business analyst at McKinsey & Co. and a reporter at the newspaper Reforma. She graduated from Universidad Iberoamericana as an industrial engineer and holds a masters degree from Harvard Business School. In addition, she has headed the Mexican chapter of [email protected] and is a member of MBA Mujeres de México A.C.

She studied industrial engineering at Universidad Panamericana, specialized in production direction. She has a solid professional career at Unilever, with over 14 years of experience. She started out as a trainee and has since held several positions in sales, customer marketing, and regional and local marketing for foods, personal care and ice cream. Currently, she responsible for brands like Knorr, Hellmann's and Maizena.

Rocío Cuadra, creative VP, Only If

Cuadra began her career over 15 years ago at DDB Mexico, and was a part of the team that was named the country's most creative agency for five consecutive years. Afterwards, she was associate creative director at Ogilvy & Mather, where she worked on accounts such as Coca-Cola, Gandhi and Panasonic. Cuadra headed Arrechedera Claverol's creative team for 7 years. In 2014 she joined Only If as creative VP. With brands like AB InBev y Coca-Cola, the agency has been awarded by festivals and publications. Cuadra has been a jury member in shows like Círculo de Oro, el Cíclope Festival and Cannes Lions 2018.

In 2015, Diez joined Grupo Bimbo as VP marketing Bimbo-Barcel (snacks) and confectionary, and holds her current position since March 2018. Diez has been working for almost two decades in marketing for big consumer product companies. Before she arrived at Grupo Bimbo, she was marketing director suburbia at Walmart, The Clorox Company and Mead Johnson Nutrition. She studied marketing at Instituto Tecnológico y de Estudios Superiores de Monterrey and did a specialization at Kellogg School of Management.

Diez has been a part of the La Costeña family for over 14 years. She has been head of media for La Costeña and Jumex and marketing assistant manager. For the past three years she has been marketing manager, in charge of strategy, advertising campaigns and promotion in digital and traditional media, as well as part of the company's communications. Today La Costeña is one of Mexico's top 10 mass consumer brands, according to Kantar Worldpanel's Brand Footprint, and one of the 10 brands most valued by millennials (Brand AssetValuator, 2017). Diez was responsible for important partnerships that have grown the bond between consumers and the brand's values, like the acquisition of licenses for Peanuts and Coco. Campaigns like Por Sabor Llévame a Rusia, 95 años and Día de muertos have made La Costeña a Mexican classic.

With over 18 years in strategic marketing, Gutiérrez Caraveo has boosted the income and market share of several mass consumer-goods companies. She also has a solid career in developing and executing marketing campaigns and operation plans for leading brands. She has worked for Mars, Novartis, KFC and Danone, where she has handled global brands, developed new businesses, launched new products, and formed and motivated teams.

For 16 years, Hernández Díaz has worked with some of the world's most iconic brands, leveraging her business education, her passion for the study of human behavior and her experience in creative processes applied to innovation, into projects that have transformed and revitalized categories in Mexico and Latin America. At 25, she became the youngest woman to lead a strategy department in a global agency. Today, as part of Publicis Communication's Strategy Council in Mexico, she contributes to the transformation agenda of one of the world's largest communications groups. As part of a generation of young leaders that long to develop new talents and share their passion for advertising, Hernández Díaz works in research, sharing knowledge and inspiring colleagues, clients and students. She believes in work that challenges conventional thought and shows the transformative power of creativity, which can have a positive impact in people and businesses alike. She is a member of the consulting council of the Women's Forum of the Americas 2019, and an active participant in several gender equality initiatives.

With 13 years of experience in the airline industry, Hernández Garcíashe began her career in Aeromexico as an alliance analyst and then worked in the sales, international marketing, client voice and research departments. Since 2017 she has been VP of marketing, and along with her team she has won over a dozen national and international awards, including two Cannes Lions, two Effies and three IAB Awards. She has a bachelor in business and a postgraduate degree in market research, both from Instituto Tecnológico Autónomo de México.

Levi has been working in advertising since the late '90s. She started out as a trainee in an Argentinean agency called Pari-Renault, and a year later joined Agulla & Baccetti as an account assistant and later account executive. There, she learned that a good creative idea makes all the difference. In A&B she worked for Sprite, MTV, Telecom, Warner Music and Buenos Aires Hot Festival. Afterward, she was at La Comunidad Buenos Aires for five years, where she supervised accounts like Volkswagen Group Latin America, Volkswagen Argentina, La Nación, Rolling Stone and BAFICI. With the last, the agency won a Gold Lion in Film for the campaign titled "If it's not fun for you, it's not for you." Later, Levi worked for another five years in Euro RSCG (Havas) as a group account director for Reckitt Benckiser Argentina and PSA Citroën Peugeot Argentina. She has lived in Mexico since five years ago, when she joined Montalvo as VP client services. She began working with founder Pepe Montalvo when they didn't even have an office. In its first year, Montalvo was independent agency of the year at Círculo de Oro, and was Mexico's second most creative shop. The agency started out with one client and now has 35, and went from 2 employees to 40. Levi is proud of campaigns like INDIO Barrios, INDIO Lubezki, Larousse #NoEsLoMismo, Larousse #NoEsNo, Moleskine, Gandhi, Fantasías Miguel and Museo Memoria y Tolerancia, among others.

In 1992, Lorenzo began her career in Procter & Gamble, where she held several roles in finance and sales until she found her passion, marketing. Her experience in those departments allows her to develop integral strategies that focus on the consumer and are at the same time attractive to commercial partners. In 2007 she took over the marketing department for the Mexican market at Mattel, and later for Latin America. Her passion for developing brands that really connect with the consumer's heart brought her numerous awards for her work with Barbie, Hot Wheels and Fisher-Price. Lorenzo is an industrial engineer from Universidad Iberoamericana.

Molina is a respected professional in the communication industry, thanks to her experience and her successful work in key areas like client services, digital transformation and integrated communication strategy. She has worked for important companies in Latin America, North America and Europe, overseeing their expansion, success and correct operations. She has been partner & managing director at IMS Mexico, at the helm of the company's expansion in the country. She was also international accounts director at Leo Burnett and CEO at Omnicom Media Group Mexico.

With over 14 years of experience in marketing and digital media, Musi is in charge of accelerating Pfizer's digital transformation and bring the brands closer to the consumers. For a big part of her career she worked for Coca-Cola Co., where she held different positions in brand marketing and integrated marketing communications. Her leadership and her passion for people and brands have helped her transform common practices into new business models, creating synergies between the organization's markets. Musi has a bachelor in industrial engineering from Universidad Iberoamericana and several certifications in digital marketing.

Ocaña studied marketing at Tecnológico de Monterrey and has an MBA from Thunderbird University and Tecnológico de Monterrey. She has over 16 years experience in marketing working in mass consumer companies like P&G and Nestlé. In 2012 she joined 3M as corporate marketing and sales director. In 2014 she founded and presided the Mexican chapter of Women's Leadership Forum, a program that seeks to promote gender equality and create an environment that fosters the inclusion and professional growth of women in the company. Because of her achievements, in 2016 she was invited by 3M corporate in St. Paul, Minnesota, to work full time in a global diversity and inclusion strategy regarding other groups too. The objective is to achieve the company's sustainability goal of doubling "diverse" talent in leadership positions for 2025. Ocaña is currently in charge of the development of regional strategic accounts for the consumer business, and is still working toward diversity and inclusion for the region.

Pantoja leads Corona in Mexico and has been in ABInBev for over 11 years. Her responsibilities include the strategy, campaigns and 100% of the brand's local marketing activities. She also has a fundamental leadership role, in teaching organizational culture, strategy development of the category portfolio and people development. Some of her most recent projects have been Corona's new global strategic positioning in over 100 countries and launching the new global campaign, This is Living, at ABInBev's New York headquarters. Under her leadership, Corona has become the most beloved brand in Mexico and Latin America, the No. 1 brand associated with the World Cup, and the most powerful beer brand in Mexico. Pantoja studied business at University of Brasilia, a postgraduate degree from IBEMAC / Insper Sao Paulo and a specialization in marketing from Kellogg University in Chicago.

Pereira runs the business for all of Coca-Cola's still categories: juices, isotonic, dairy, seeds, coffee and more. She's chair of the board of Jugos del Valle Co., a joint company in Mexico that includes Coca-Cola and Santa Clara. Over her 26 years in TCCC, she has the chance to work all over Latin America (Brazil, Latin Center BU and Grupo Latinoamericano) with different positions. She is a member of the board in Solar, Coca-Cola's second biggest bottler in Brazil, and YPO International. Pereira has a bachelor in business from Universidad Federal de Rio de Janeiro.

With over 20 years of experience in communications, public affairs, crisis management and sustainability, Renjifo Zambrano began her career in Colombia's public sector. For about eight years she worked with public policy projects. After working in several government entities, she joined Diageo as head of corporate relations for Colombia. In 2011 she took under the Andina region and in 2013 moved to the company's headquarters in London as global director of corporate relations strategy. In 2017 she was put in charge of the corporate communications, public affairs and sustainability department for L'Oréal in Spanish-speaking Latin America. Her passion for talent development and high performance teams is what fulfills her the most, and is one of the drivers of her career so far.