What did the agency set out to do on this spot, and what were your your initial expectations for the job?

To produce another commercial that successfully imprinted in the minds of its audience that Sony Bravia LCDs produce color like no other, in yet another surprising and amazing way.

What made you go with Jonathan Glazer for this project?

Jonathan is a hugely successful director for a reason, and if you're lucky enough to engage him in a project, then, simply, you work with him.

What were the major challenges of the production, and how did you go about addressing them? Because what we were trying to do had never been done before, I think it's safe to say that pretty much every step of the production process was challenging. From finding a suitable location, to testing the fireworks, to producing the right consistency of liquid so it would look and behave like paint.

For you, how did the production on "Paint" differ from your experience on "Balls"?

I think the only similarity between "Paint" and "Balls" was that both "events" had never been attempted before and that's always slightly scary?exciting?but definitely scary. But ultimately we needed to do a lot more testing and preparation work for "Paint" than we did for "Balls."

What was your proudest moment during this production?

The reverse demolition, where the paint goes up the building, was the most expensive shot of the shoot. We had terrible weather leading up to this shot and the weather had closed in again. Ahead of us was a small window of sunshine, but we couldn't tell if it was five or 20 seconds long. We just knew it wasn't very long at all. Dan Landin our DOP had to make the call whether or not to turn over. I wouldn't have wanted to make that call.

What was Jonathan Glazer's shining moment?

His attention to detail goes some way to explaining why he's one of the greatest directors around.

What were some of the interesting challenges involved in post, effects, editing, music/sound, etc.?

If you could do it all again, would you do anything differently? What and how?

More time and dare I say it, more money.

Overall, what did you learn about production from this particular experience?

I think you learn something on every shoot, but this time I learnt to never shoot in Glasgow. 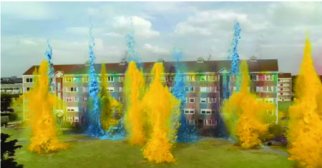 What happened to the Glasgow building post-shoot? The building was awaiting demolition in December 2006.

What kind of paint? An edible eco- friendly liquid.

What kind of, and how much ammo did you use to set off the explosions? 358 single bottle bombs, 33 sextuple air cluster bombs, 22 triple hung cluster bombs, 268 mortars, 33 triple mortars and 22 double mortars.