What's Become of the Social-TV Ecosystem?

In the Wake of CBS Wholly Acquiring TV Guide Digital, a Fresh Look
READ THIS NEXT
Maybe your company should hire a Chief Sanity Officer

On Friday, CBS Corp. wholly acquired TV Guide Digital -- including TVGuide.com and its mobile apps -- bumping up its stake to 100% from 50% by buying out Lionsgate. Given that news, we thought it'd be a good time to revisit our Social-TV ecosystem chart -- which we last updated in October. 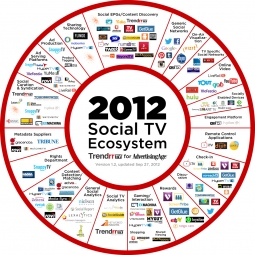 For each of the three versions of the chart, Ad Age worked with our editorial partner Trendrr, the social-media monitoring firm. We informally asked for reader feedback when each version was published -- but now we're doing something a little different. We've already been making changes to reflect what's happened in the space since the fall (e.g., Twitter's acquisition of Bluefin Labs in February), but we're also asking for your input before the publication of the fourth version.

First, the chart is primarily about the U.S. TV market, so we've generally left out non-U.S. players to keep the chart from getting too unwieldy. But we're open to including international companies that have formally entered the market here with a consumer-facing service or app (e.g., U.K.-based Zeebox, which arrived in the U.S. in September and is promoted on NBC shows such as "The Voice").

Second, various companies have tried to convince us that their logos should be all over this chart because they're so incredibly diverse in what they do. Again, to keep the chart from getting too unwieldy, we're asking self-nominating companies to limit their requests for inclusion to two (or, at most, three) "slices" of the pie -- i.e., your primary areas of focus/expertise.

To make any and all suggestions for inclusion, deletion or other updates, email me by June 21 (click on my byline, above, to get to my email address). We'll publish a post with an updated chart next month.