With live sports on hiatus, turner sports turns up the storytelling | Ad Age
Skip to main content
Sign In Register

The COVID-19 pandemic has put most of the live sports world on hold and has had a major impact on viewership and the advertising industry as a whole. But that hasn’t stopped Turner Sports, WarnerMedia’s sports division. By leaning into what they do best and maintaining their connection with their fanbases, Turner Sports brands like Bleacher Report and ELEAGUE have proved that even with live games being benched, the engaging stories and passionate culture beyond the field and court continue on.

This was most recently seen during Bleacher Report’s “B/R Gridiron 2020 NFL Draft Show” presented by Rocket Mortgage and Quicken Loans—the first time that the sports site streamed the show live within its app, resulting in triple the overall viewership from the year prior. For this year’s socially distant draft, Day 1 also marked the second-highest day for new account creation within the app. Day 2 was the best day of the year in terms of B/R app visits, and overall B/R tallied a 45 percent year-over-year increase in alert opens for draft-related content.

The NBA and NHL suspended their seasons. MLB cut spring training short. The NCAA, PGA Tour and the tennis Grand Slams are on hold or canceled—even the Tokyo Summer Olympics have been postponed until 2021. And yet, Turner Sports and Bleacher Report have seen an increase in engagement from fans. How do you explain that?

Ed Romaine: Even though sports have been paused globally, storytelling for us has always been paramount. Historically, we've struck this balance between sports and culture in a breaking news model, and for Bleacher Report, it's about shifting the way we’ve executed content creation in the past and focusing on fostering competitive spirit while building community around sports, even if it means doing it in the house. Right now, people are seeking solace and distraction, and even finding comfort in nostalgia, looking forward to a day when we can proceed as we always have, even if it doesn’t look exactly the same.

Seth Ladetsky: The beauty of esports is that it’s natively a digital entity. The engagement has grown, and the communities have already spread it around by not being together—being in their own environments, engaging online, competing in different countries.

Since its inception, our esports brand ELEAGUE has focused on storytelling and always gone beyond just the actual competition. We’ve made it more of a fully encompassing program and it also has the benefit of being on television. There's no other esports programming that’s available every week on a fully distributed cable outfit like ELEAGUE has with TBS. Cable programming allowed us to broaden the tent on esports—we're actually bringing viewers into the space who might not have sought it out.

ELEAGUE has made moves beyond cable programming too. Its recent collaboration with Twitch, which launched in February, has been huge.

Ladetsky: With or without the current situation, we’ve always believed in this programming. We felt like there was no one, from a high-level, broad perspective, celebrating and highlighting the incredible range of cultural influence that exists across Twitch’s vibrant universe of streamers and their highly engaged followers. And that’s in addition to the popular professional esports athletes who also stream casually on Twitch. We thought there was a lot of white space there, and Twitch was a big asset to help us on that, and we've been full steam ahead ever since.

And then, on the more traditional side, the appetite for stories and updates still exists, even if the regular season game coverage isn’t.

Romaine: We've increased user-generated content by almost a quarter since the sports hiatus started. It's increased our social engagements by 40 percent, which is astounding.

We’ve figured out ways to engage with athletes while they are at home as well. Just like us, they're on pause from their training, they're on pause from interacting with their colleagues and fellow team members. To that end, we’ve done FaceTime interviews with the likes of Utah Jazz center Rudy Gobert, Giants running back Saquon Barkley, Belgian soccer star Romelu Lukaku, and Toronto Raptors power forward Serge Ibaka. Think about your Zoom calls where you're looking inside people's homes and seeing their pets and their kids and all the things around them—having that new level of intimacy has been working well for us because it gives fans a level of access that they didn’t have with this kind of frequency before.

We also created a Bleacher Report Madden GOAT Sim which generated two times more views than our previous simulation efforts. Our fans are desperate for sports to return; they’re desperate to be engaged with stories. But this new level of accessibility has meant that people are opening our app and refreshing way more times per day, even though they're not necessarily seeing more news.

Have those insights guided your approach to the big sporting events that are still happening, like the NFL draft?

Romaine: Certainly. Historically, the NFL draft is our most visited time period of the year on the app. And this year, for the first time, our virtual show had live capability inside the app product and the results far exceeded our expectations. The draft in many ways fed the craving that fans have had for the past five or six weeks.

How have advertising brands reacted to these changes, both internally for their own budgets and survival and outwardly, with what WarnerMedia has to offer?

Romaine: So many brands are obviously adjusting to a new economic reality, and some of what we’re doing is getting brands to think about different ways to engage with fans during this pause. There is a way to capitalize on the viewer’s desire to return to normal while also acknowledging the challenges being endured in an appropriate way for what their normal currently is. People want to make sure that brands are not being insensitive to economic realities and also not repeating the same message as that can render as inauthentic to a discerning ear.

Ladetsky: With ELEAGUE, we've been able to live in the esports world and the sports world at the same time, and that kind of nimbleness and creativity around esports is a real benefit. A lot of companies who are still advertising are now looking at esports and gaming, whereas they might not have three or four months ago.

Romaine: TikTok has also proved to be an incredible platform for us. Our House of Highlights Instagram feed just surpassed 3 million users on TikTok, putting the brand above 23 million followers across all social channels. B/R Football is another one of our brands that is seeing significant engagement. We're generating 61 percent more daily video views than we did prior to COVID-19. We're adding 70,000 followers per week on Instagram.

And until then, the storytelling continues.

Ladetsky: That’s exactly what we are doing. We are continuing to do the storytelling aspect of esports and gaming and its fandom. We want the whole space to elevate, and we're happy to bring new fans in.

Romaine: Whether you're a diehard NFL or NBA fan, you're still looking for ways to distract yourself, and so we need to engage with our fans in an irreverent, fun, youthful, humorous way. I think we've done a really good job at striking that balance. Bleacher Report is the No. 1 most engaged sports media brand in the world, and that fact has been confirmed definitively over the last month.

Seth Ladetsky oversees national advertising sales and strategy for Turner Sports’ portfolio of digital brands, including ELEAGUE, NBA Digital, NCAA Digital, March Madness Live, Bleacher Report Live, and the UEFA Champions and Europa Leagues. In addition, he leads a team representing all of Turner Sports’ assets, including the aforementioned leagues, Bleacher Report, and televised sports on TNT and TBS. Ladetsky currently serves on the boards of the Interactive Advertising Bureau and the eSports Ad Bureau. 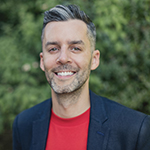 Ed Romaine joined Bleacher Report in 2018 and oversees all of the company's trade and consumer marketing efforts in order to diversify partner investment and grow the preeminent sports culture brand's marketplace perception and audience. He oversees the brand, strategy, branded content and design teams at the organization.

Under his leadership, B/R has become the #1 partner for sponsored content in the sports market, and the #1 partner by engagements in all of digital video. B/R has owned engagement with the brand’s authenticity and ability to create content that resonates with its millennial and Gen Z audience. The company’s loud voice in the sports media world provides the best user experience with both curation and original content creation.