Voiceover productions can be more efficient and produced at scale with voice avatars, converting an entertainer’s voice into an AI model for audio use
Credit: WellSaid

When you think of voices created by artificial intelligence (AI), you probably imagine the audio likeness of a robot or computer. And you’d be right—and you’d be wrong. Because whereas the original, more-rudimentary computer-generated voices were little more than a hobbyist’s new favorite toy, today’s AI voices are an advertiser’s human-sounding secret weapon to move faster, execute smarter and create content more efficiently. A creative revolution is upon us and to be honest, it sounds pretty cool.

What are AI voice avatars?

An AI voice avatar is a synthesized narrator that sounds like a human voice. No, really. To create a voice avatar, a sophisticated AI voiceover platform converts the voice of a person, who authorizes its use, into a natural-sounding AI model for brands to use in their productions. Brands can then use voice avatars for commercials, teasers, trailers, podcasts and any digital experience requiring voice.

The resounding benefits to advertisers and creatives

Voice avatars are more than a shiny feature in an advertiser’s toolkit—more than, say, the high-powered “Ludicrous Mode” Tesla Model S, something enjoyed but overlooked by more practical day-to-day functionality. Rather, when used to their full potential, voice avatars represent the feature that enables creators to connect with audiences in ways that simply can’t be done, properly and economically, without AI.

For example, with any given advertising campaign, advertisers might want to create 2,000 permutations of the same ad, changing a single word for thousands of markets or test variations. In a traditional production, no one looks forward to that recording day—not the advertiser, not the voice actor, not the project manager, not the post-production team managing thousands of one-word modifications. But with voice avatars, an advertiser could simply choose a voice they like, either an existing voice avatar or one they design themselves, then create 2,000 permutations of an ad in a few clicks. Not only is this process far less manual and more cost-efficient, but it makes being in advertising a heck of a lot more fun.

Additionally, the world’s top podcasters, radio DJs (both internet and traditional) and A-list celebrities often record teasers and trailers for upcoming projects. However, asking in-demand talent to gleefully reserve an entire day from their already jam-packed schedule to record hundreds of teaser variations is challenging, if not wishful thinking.

Instead, advertisers and creatives could use AI to create a voice avatar of an entertainer’s verbal likeness, match the tone to the type of creative spots needed, then quickly render multiple iterations. Not only does a voice avatar free entertainers to spend time where their talents are most valuable, but it also promotes upcoming projects more efficiently and at a greater scale. Everyone wins in this situation—the talent, the advertiser and the broader entertainment company.

Voice avatars aren’t just beneficial to brands, advertisers and creatives. They’re the new frontier for any advertising that contains the spoken word, from ads on Hulu, YouTube and Spotify to commercials across television and home devices.

It has to be said: ethical considerations

To be clear, voice avatars are not meant to be a replacement for talent, but an augmentation of it. Voice avatars free talent to do what they do best (and enjoy most) by providing a more efficient way to use their voice across brand and promotional materials.

Similarly, voice avatars are not to be confused with deepfakes, that is, synthetic media where a person in an existing image or video is replaced with someone else's likeness. Rather, they are intentional marketing tools that empower brands to tell their story—not anyone else’s. It’s imperative that creators secure the necessary approvals (including a voice actor’s) when a likeness is involved.

Advertisers already use AI and automation to enhance analytics, targeting and testing. AI voice avatars offer the next untapped opportunity to reach audiences less manually and more efficiently. However, brands and content creators who care about quality understand the difference between merely creating a lot of content versus producing the highest quality possible for their audiences to enjoy.

Today, with a top-tier AI voiceover platform, you can generate synthetic voices as life-like as a real human. Because anything that requires voiceover is worth saying well.

WellSaid Labs is the leading AI text-to-speech technology company and first synthetic media service to achieve human-parity in voice. Creators, product developers, and brands alike power up their stories and digital experiences with a wide variety of voice styles, accents and languages — at scale. For more information go to www.wellsaidlabs.com 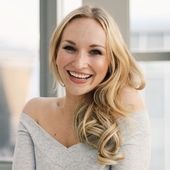 Jessica Johnson a Content Strategist for WellSaid Labs. She also teaches a copywriting course in which she mentors writers in content marketing and strategy.