President Donald Trump earlier this summer signed an order to help ensure the protection of Confederate statues around the U.S. in the wake of vandalism during protests following the death of George Floyd. But it’s unclear if the POTUS will feel as protective toward a trio of monuments dedicated to him that sprung up near the White House this weekend.

Three living-statue installations illustrate key moments of Trump’s tenure. One, titled “The Poser,” (above) recreates his much-criticized appearance at St. John’s Church in D.C. and highlights his track record as “Destroyer of Civil Rights Liberties.” It depicts him standing awkwardly upright with a Bible in hand as a police officer beats down a protestor with a Black Lives Matter sign. 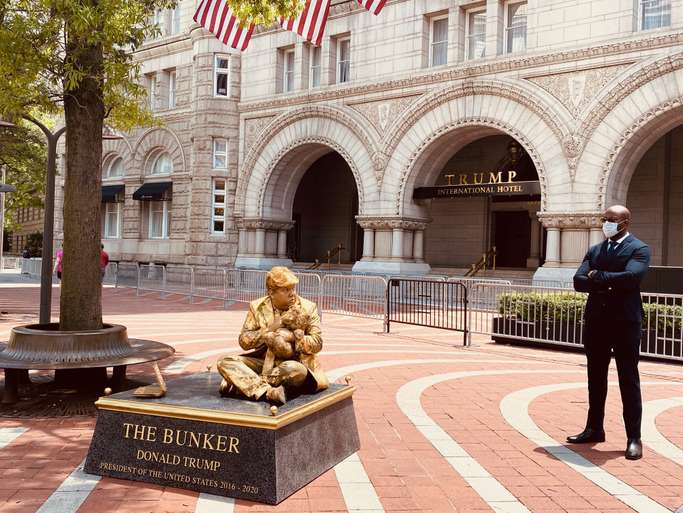 A second, simply titled “The Bunker,” recounts when Trump decided to take shelter in a White House bunker as protests erupted around the country, rather than heeding advisors’ advice to try to quell the nation’s anxieties in a televised address. 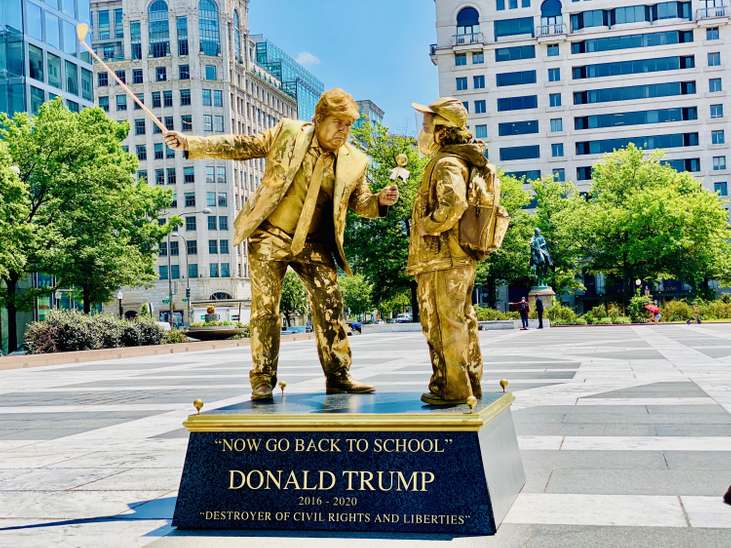 A third, titled “Now Go Back to School,” shows Trump swinging a golf club as he screams at a masked student, highlighting his push to reopen schools around the country even as COVID-19 cases continue to rise.

The “Trump Statue Initiative” was spearheaded by an unexpected creator, Hungry Man director Bryan Buckley, who in this industry is better known as the “King of the Super Bowl” for his decades-long oeuvre of Big Game blockbusters. This, however, was a personal project designed to “memorialize” the 45th President’s real legacy to the country, says Buckley.

Watching Trump, “I couldn’t sit back,” he says. “It’s a personal thing. Every part of our life is being violated right now. I can’t think of anything that isn’t being compromised. It’s an act of desperation at this point.”

Buckley says the idea had been brewing for some time. “I noticed that Trump was obsessed with statues,” he says. The final push came when POTUS decided to sign the executive order to preserve monuments after protestors toppled statues of Confederate soldiers and Union general Ulysses S. Grant, who was a slave owner.

“I felt like the best thing we could do was to create these very honest statues of the legacy he’s living right now, that let the world see exactly who he is,” Buckley says.

Unlike the longstanding monuments, however, the Trump Initiative Statues are living, breathing exhibits—realized by the sort of street performers who paint themselves in gold or bronze and stand motionless in the park or in subway stations. Resting on plinths, they were placed next to the Trump Hotel in D.C. and at each end of Freedom Park, across from the D.C. Mayor’s office.

Buckley says this was a very deliberate decision designed to maximize the impact of the idea. “With living statues, people can’t help but stare at them. There’s a kind of emotion you can convey and it’s almost performance-driven—you could be tweaking it up to the moment.” It also helps that they make for a very “mobile” pieces and the production team could quickly reset or relocate as needed.

The installation also came with music—Buckley tapped a violinist Celeste Vee to play pop tunes that its creators had banned from being played at Trump rallies. “He tried to play a lot of R.E.M., which is bizarre,” Buckley says.

Each piece remained on location for between three to four hours. Buckley says he worked with Bradley Tusk of Tusk Strategies to help get the word out on the effort. The ultimate goal, he says, is to make noise and get people out to vote on November 3. The initiative will be rolling out in phases, with more to come as election day approaches.

Buckley says that COVID-19 safety protocols were followed throughout. Performers all wore masks, except for those who portrayed Trump (in order to keep them in character). Statues that required “Trump” to appear with other talents, like “The Poser,” were arranged so that the POTUS actor remained distanced from the others.

This afternoon, the campaign expanded to a new kind of memorial piece. Today, after Trump tweeted an image of himself wearing a mask and suggesting that doing so is "patriotic" (after long refusing to wear one in public over the course of the pandemic), the initiative released this film announcing a commemorative coin to mark the moment. "Tragically, it took 143,000 deaths for his ego to get there," it reads.

Buckley is also encouraging other creators to take part, including younger talents who might feel paralyzed right now in the midst of the industry's upheaval during the pandemic. “With work dying, it's so depressing for a lot of creatives,” he says. “They're so down and this could be a good outlet.”

The initiative’s site also reads, “We encourage you to join our movement and create special statues of your own.” And If not then, “we encourage you to vote on November 3rd. We would very much like this growing exhibit to end then.”

As for how he thinks his latest move will reflect on him or his company with regards to future work with clients and brands, Buckley says there are more important things at stake.

“I don’t see a choice,” he says. “I would rather align myself with people who believe in democracy, rather than a client that says, ‘You went too far and now I don’t want to work with you.’ We’ve just sat back too long on this guy, it’s out of control and there is no option. If you blacklist me forever, that’s a chance worth taking.”